Today we dive into No. 22 Clemson.

For the first time in seven years and for just the second time in the tenure of Brad Brownell, the Clemson Tigers are entering a college basketball season coming off of a trip to the NCAA tournament.

For the first time in 21 season, Clemson won a game in the NCAA tournament, getting to the Sweet 16 for the fourth time in the history of the program and picking up just their 10th tournament win ever.

Suffice to say, this is not a school that is accustomed to basketball success, which is what makes this season all-the-more fascinating.

Clemson is this year’s Northwestern. For the first time in the history of their program, the Wildcats reached the NCAA tournament in 2017 and, with essentially everyone on their roster returning the following season, they entered 2017-18 as a team that popped up in just about everyone’s preseason top 20. We all know how that story ended: The Wildcats faded back into obscurity as the pressure of playing as ‘the hunted’ and the weight of expectation was too much for them. They finished just 15-17 overall and 6-12 in the Big Ten, losing their final seven games before disappearing back into irrelevance.

Is that what’s in story for Clemson this season?

In theory, it shouldn’t be, but the response to success is sometimes just as important as finding it in the first place. 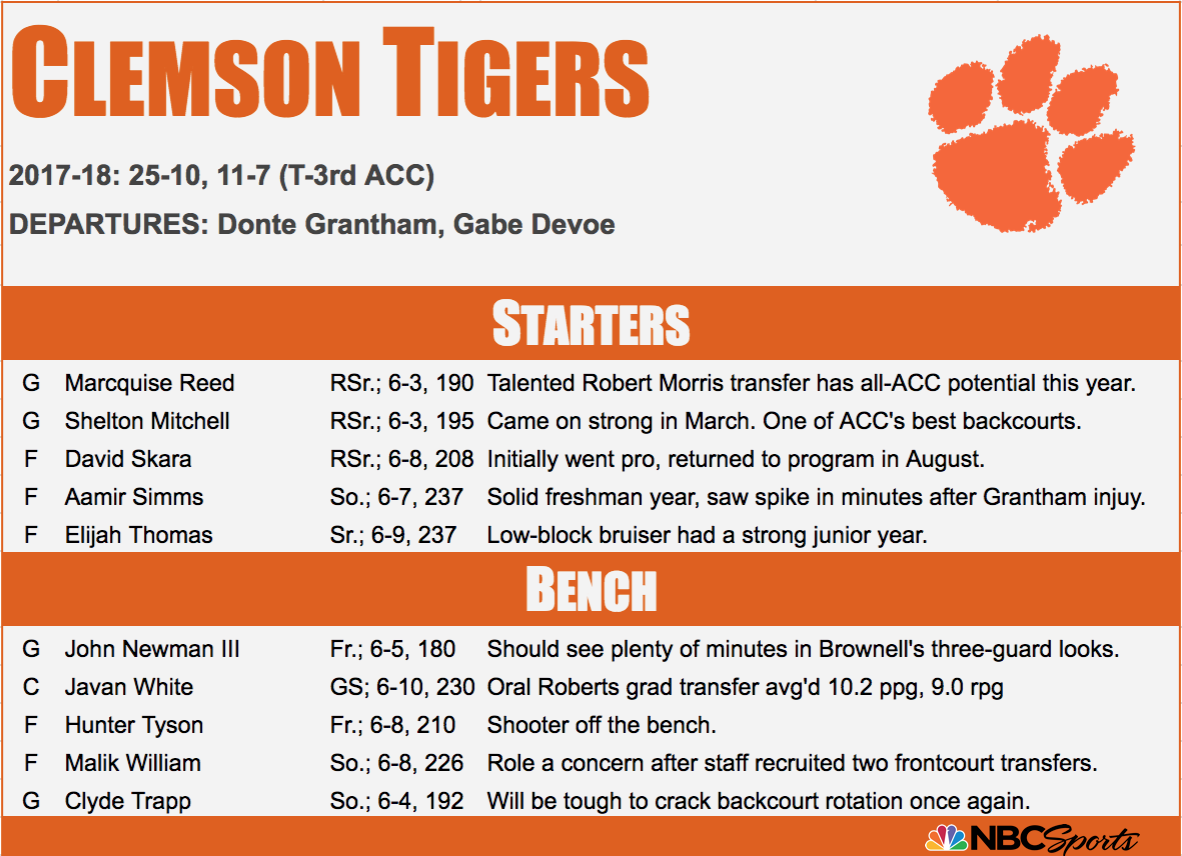 CLEMSON WILL BE GOOD BECAUSE …

In an era where we constantly focus on one-and-done recruits that will have to adjust to playing in the college ranks, Clemson will feature the oldest backcourt possible.

Marcquise Reed and Shelton Mitchell — who combined to average 28.0 points and 6.9 assists for one of the slower teams in the ACC last season — are both going to be redshirt seniors this season, heading into their fourth season under Brownell’s tutelage after transferring into the program from Robert Morris and Vanderbilt, respectively. They won’t have any hype heading into the season but I’m not sure there are three teams in the ACC with better guards. Duke, sure. Virginia, probably. Maybe North Carolina? Syracuse?

And they aren’t the only veterans in this Clemson starting lineup.

Elijah Thomas will be back for his senior season after finally looking like the player that was a top 30 recruit coming out of high school last season. Throw David Skara into the mix after he opted to return to school, and Brownell has a team that might end up collecting social security checks by the end of the season.

That’s a good thing, because it lends credence to the idea that the Tigers can continue to be one of the best defensive teams in college basketball this season.

Last year, Clemson finished 7th nationally in KenPom’s defensive efficiency metric, which is the highest that Brownell has ever had a team finish in his coaching career. He’s had good defenses before — that’s what he is known for as a coach — but the previous three seasons, the Tigers failed to crack the top 50 defensively. Clemson is not going to be Villanova. They just do not have the horses to be able to take 30 threes a game and put up 90 points without breaking a sweat. If they’re going to end the year where we have them starting the season, it’s going to be because of continuity on the defensive end.

Combining a pair of all-league-caliber guards with a defense that projects as top three in the conference is a great place for a team to start.

BUT CLEMSON IS GOING TO STRUGGLE BECAUSE …

We more or less know who Clemson’s top five is going to be.

A season ago, the Tigers played with an eight-man rotation — seven after Donte Grantham tore his ACL in January — and three of those eight have since graduated. You don’t need to be an analytics guru to figure, then, that Clemson’s best five this year will be the four aforementioned seniors — Reed, Mitchell, Thomas and Skara — along with sophomore Aaric Simms, who slid into the starting lineup after Gratham’s season ended.

Beyond that, however, it’s really hard to figure where Clemson is going to get minutes and production from.

Let’s start with this: Last season, the Tigers thrived with a three-guard look, as Reed, Mitchell and the now-graduated Gabe Devoe all averaged roughly 34 minutes. When one of them would get a blow on the bench, Brownell typically went to a bigger lineup, which is not necessarily a great sign for the young guards waiting in the wings on this roster — Anthony Oliver II and Clyde Trapp, both of whom are sophomores and neither of whom saw more than eight minutes per game last year.

Can Brownell trust either of them? Will four-star freshman John Newman III be ready to contribute immediately? I’d bet on the latter over the former, but either way, someone is going to have to play those minutes, not only to ensure that Reed and Mitchell won’t play 40 minutes a night but to allow Clemson some lineup versatility. Teams that can switch between a three-guard, small-ball look and lineups with three forwards on the floor are tougher to prepare for and matchup with than a team will only play one way.

It’s worth noting here that I am slightly less concern about frontcourt depth. Both Skara and Simms — who we’ll talk more about below — can play the forward spots, and Clemson did bring in Javan White, a 6-foot-10 grad transfer from Oral Roberts.

Did anyone get better this offseason?

As the saying goes, the best thing about freshmen is that they become sophomores, and Brownell is very much going to hope that is the case for Clemson this season.

We’ve already touched on how important it will be for one of (or both) Trapp or Oliver to take a step forward this season, but perhaps the most intriguing player on the roster is going to be Aamir Simms.

In the past, Brownell has deployed a small-ball four to great impact, whether it was K.J. McDaniels, Jaron Blossomgame or Grantham, and Simms profiles has the next in that pipeline. He proved to be an effective defender during his freshman season, and he profiles as a guy that could end up being one of the best defenders in the ACC as his career progresses. He is one of the biggest reasons why I think Clemson will once again finish in or around the top ten in defensive efficiency this year.

The key is going to be how he develops on the offensive side of the ball.

McDaniels and Blossomgame were both second round draft picks, and not just because of what they provided defensively; they both averaged better than 17 points in their final season with Clemson. Grantham averaged 14.3 points as a senior. They were vital cogs in what the Tigers did offensively.

Simms averaged just 5.7 points in the 16 games after Grantham got injured. He shot just 32.6 percent from three as a freshman. Clemson lost two of their top three scorers from a team that wasn’t exactly an offensive juggernaut. Someone is going to have to step up and provide a spark on that end of the floor.

If Simms is that guy, I think Clemson can hit their ceiling …

… I’m just not quite sure what that ceiling is.

I don’t think that Clemson fans can expect all that much more than last year’s Sweet 16 run this season. They haven’t really added pieces to get better considering the losses they’ve suffered.

That said, their floor is also very high. Clemson projects as a team that is going to be very good, if not elite defensively. They have a pair of guards that will show up on all-ACC teams that are both fifth-year seniors with experience winning in March. Those are the two things we look for, right?

So while I don’t think Clemson is going to be all that exciting this year, no one ever said a team needs to be exciting to win a lot of games.