Today we dive into No. 25 Marquette.

Steve Wojciechowski is heading into his fifth season as the head coach at Marquette, and in theory, this should be the best team that he has had since arriving in Milwaukee on the heels of the Buzz Williams era.

I like when all of the dots connect, and it seems like that is going to be the case for this team.

They have an all-american at the point, arguably the nation’s best shooter in Markus Howard who averaged 20.4 points despite sharing lead guard duties with the now-departed Andrew Rowsey. They have one of the nation’s most underrated forwards in Sam Hauser and his brother, Joey, a top 50 prospect that enrolled in school a semester early to redshirt and rehab with the program. They have a number of talented wing pieces that fill different roles and provide Wojo with a measure of lineup versatility.

Perhaps most importantly, the Marquette coaching staff tapped into the transfer market to fill the biggest holes on this roster, adding Joseph Chartouny and Ed Morrow.

Put it all together, and there really is a lot to like here.

But the question this season is the same as it has been for each of the last two years: Will Marquette ever figure out how to get stops? 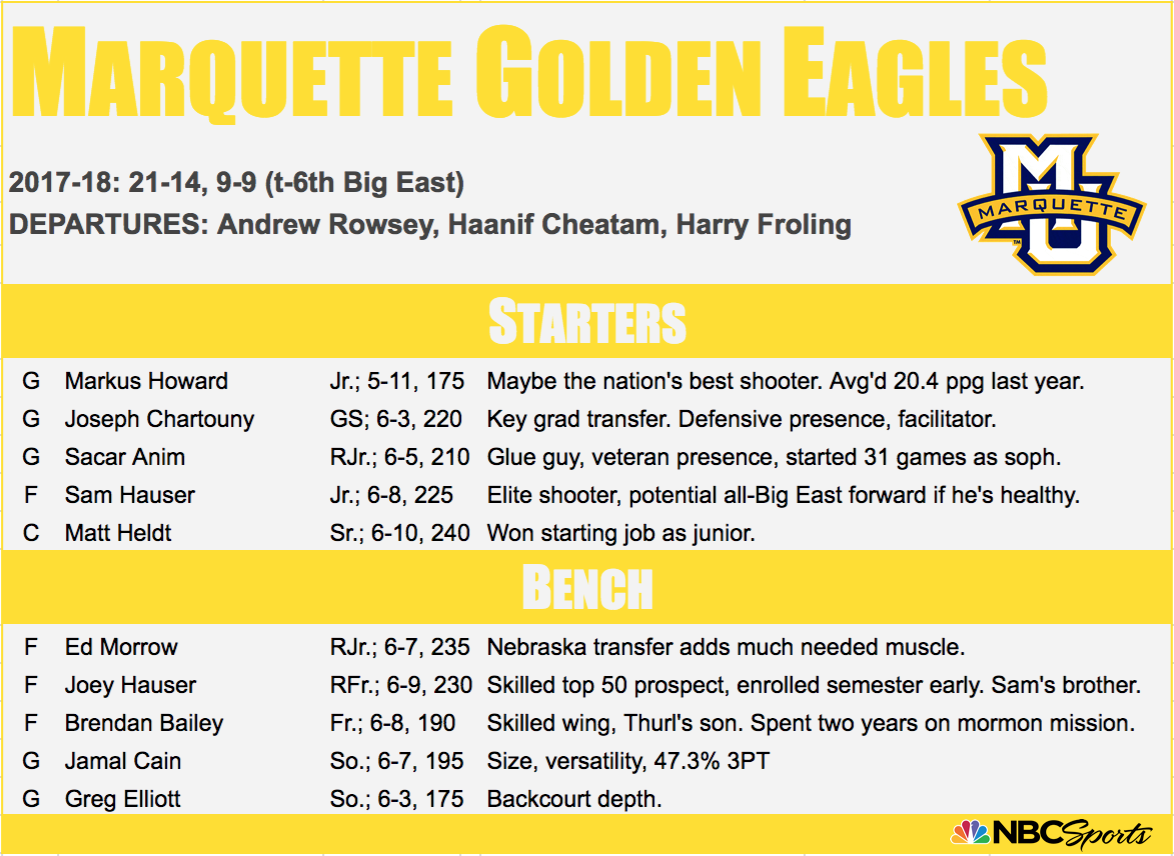 MARQUETTE WILL BE GOOD BECAUSE …

There’s little doubt in my mind that this group is going to be able to put up points in a hurry, because that’s really the only thing that they have been good at since Wojo showed up.

In each of the last two seasons, the Golden Eagles finished in the top 12 of KenPom’s adjusted offensive efficiency metric. Only four other teams managed to do that — Villanova, Duke, Kansas and North Carolina. That’s pretty impressive company to be in, and I don’t see them slowing down at all this season.

The biggest reason for that is the return of Markus Howard. The 5-foot-11 native of Arizona has proven himself to be in elite company when it comes to his ability to shoot the ball from the perimeter. As a freshman, he knocked down a ridiculous 54.7 percent of his three pointers while shooting 4.8 threes per night. As a sophomore, he shot more than eight threes per game and still hit better than 40 percent of them despite the fact that the threes he was taking were a much higher degree of difficulty. His scoring rose from 13.2 points as a freshman to 20.4 points as a sophomore.

And with Andrew Rowsey, who actually led the team in scoring and assists last season, gone, Howard’s role is going to grow even larger as a junior.

I have little doubt he’ll be able to handle it. Howard’s efficiency did not drop all that much between his freshman and sophomore seasons despite seeing his usage rate rise from 25.4 to 28.8. The way he was used was totally different as well. As a freshman, 33.1 percent of Howard’s offense came simply as a spot-up shooter, a number that dropped to 19.5 percent as a sophomore, according to Synergy. Instead, 42.6 percent of Howard’s offense came in pick-and-roll actions when including passes.

Frankly, there’s still plenty of room for him to improve as well. During his sophomore season, Marquette ran Howard off of screens five times as often as his freshman year, but he shot just 30.9 percent in those actions. His 0.797 points-per-possession ranked in the 36th percentile nationally. For someone that shoots the ball as well as Howard does, shooting on the move should not be all that difficult to improve.

And it’s something that he will need to improve on, because one of the key additions that Marquette made this offseason was Fordham grad transfer Joseph Chartouny, who should be able to step in right away and provide consistent minutes next to Howard. Chartouny averaged 12.2 points, 5.6 boards, 4.6 assists and 3.3 steals as a junior, but he profiles much more as facilitator than anything else. As good as Rowsey was, he was a guy that was ball-dominant and looking to score first. Chartouny is phenomenal in ball-screens, has a very high IQ and will look to get his teammates involved first. That is a good combination of skills for a player on a team that will likely have three snipers around him.

What’s more promising is that Marquette does have weapons around him that will be able to score. Sam Hauser remains one of the most underrated players in the country. As a sophomore, he averaged 14.1 points, 5.7 boards and 2.9 assists — more than Howard — while shooting 48.7 percent from three and turning in the nation’s 11th-highest offensive rating, according to KenPom. He’ll be a junior this season and should play plenty of minutes with his brother Joey, another skilled, 6-foot-8 forward with plenty of range, joining him on the floor.

I’d expect those three to be the crux of what Marquette does offensively, and they should be talented enough to carry the load, but there are other pieces. Jamal Cain is a 6-foot-7 sophomore that shot 47.3 percent from three as a freshman. Brendan Bailey, another versatile, 6-foot-8 forward, is the son of former NBA player Thurl Bailey and was a top 50 prospect coming out of high school before going on his Mormon mission.

Marquette is annually one of the nation’s best shooting teams and most efficient offenses, and there’s no reason for that to change in 2018-19.

BUT MARQUETTE IS GOING TO STRUGGLE BECAUSE …

The Golden Eagles have been a train-wreck on the defensive end of the floor for two years, and we’ve reached the point where the inability to get stops has turned into something of a calling card for the Wojo era.

Every year that he has been the head coach at Marquette, their defense has gotten worse. Last season, the Golden Eagles finished 182nd in KenPom’s adjusted defensive efficiency metric. Only six high-major programs finished below them: Washington State, East Carolina, South Florida, Tulane, Memphis and Iowa. Only four teams reached the NCAA tournament with a worse defensive rating — Texas Southern, LIU Brooklyn, NC-Central, Iona — and Iona, a No. 15 seed, was the only tournament invitee that was not in a play-in game.

This is what happens when the three best players on your team are all mediocre-at-best defenders. Both Rowsey and Howard are under 6-foot with limited physical tools, and Sam Hauser is certainly not known for his athletic prowess. Center Matt Heldt didn’t exactly help matters, either. He’s not a great shot-blocker and he’s less-inclined to make an impact defending ball-screens. When your perimeter players struggle to keep people in front, your defense cannot guard pick-and-rolls and there isn’t someone at the rim to erase defensive mistakes, this is what happens.

With Howard, Heldt and both Hausers all expected to see major minutes again this season, Marquette is not going to turn into Virginia overnight.

But there is some reason to be optimistic that things will be better this year.

For starters, Chartouny is unquestionably going to be an upgrade defensively over Rowsey. He stands 6-foot-3, which helps quite a bit, and he has finished top two in steal rate each of the last two seasons, although those numbers were inflated a bit by the style of defense Fordham played. He’ll be an upgrade defensively, but he’s not Khyri Thomas.

Then there is Nebraska transfer Ed Morrow. A 6-foot-7 redshirt junior, Morrow excels at being athletic and playing hard. He’s somewhat limited offensively — sources in the Big Ten said part of the reason that Nebraska improved last season after he left was because they no longer had to neuter their playbook — but Marquette isn’t going to need him to do too much. He’s an aggressive rebounder, he’ll help as a rim protector and he is going to be a factor in ball-screens on both ends of the floor.

As one coach put, those guys “will help them [but] won’t win them the Big East.”

Let’s start with Sam. He played last season with a hip issue that required surgery to fix this offseason. He underwent the procedure in March, and while he was supposed to be out six months, it’s now late-September and he still isn’t back to full strength. He’s expected to be cleared soon and, barring a setback, will be ready to go by the start of the season, but it’s hard to project how any player is going to come back from a long layoff and recover from a surgery. He needs to be at full strength and, frankly, better than he was last year if Marquette is going to outperform expectations.

And then there is Joey. It’s always going to be difficult to project how a freshman is going to impact a team and a program, and that’s before you consider the health issues he’s dealt with in the last year. He underwent surgery last August to deal with a foot injury he suffered in a 2016 football game. He then underwent another surgery on his ankle in December, an injury that was likely related to his first surgery. He enrolled at Marquette early in part to get the best medical care that he could as he rehabbed, and he was cleared for workouts over the summer.

I can probably include Brendan Bailey in this conversation as well. He was a top 50 prospect but he missed the last two seasons on his mission.

Those three are the versatile forwards that will be able to help Marquette space the floor this season. They will determine what Marquette’s ceiling is this year.

Marquette is going to be one of those teams that can beat anyone.

They will have nights where they score 100 points. Markus Howard may not go for 52 points in a game against this season, but I would not be surprised to see him crack 40 multiple times. When they get hot they are going to be very difficult to beat.

The issue is going to be on the defensive end of the floor. Can they get enough stops that they will still win some games when they go 8-for-30 from three instead of 14-for-30? In theory, I think they can, but that is going to depend on the health of the Hausers, the impact that Chartouny and Morrow make defensively and how Howard adjusts to being the marked man in the Big East.

They should be a tournament team. But would anyone be surprised if they finished outside the top 100 defensively in a return trip to the NIT?