NORTH AUGUSTA, S.C. — Over the years, Peach Jam — the finals of Nike’s EYBL summer circuit — has grown into being the preeminent event during July’s Live Period.

Played in the newly-renovated Riverview Park Activities Center, Peach Jam features six courts that are packed to the gills, with college coaches on one side of the floor, fans overflowing the bleachers on the other and a track circling the building overhead that can get four- or five-deep with people if the matchup is right.

It is without question the best and most intense basketball you’ll see in July, not only because of who is watching and what scholarships are going to get earned, but because of the honor that comes with winning a Peach Jam title.

But it’s also because of situations like this: James Wiseman, the No. 1 player in the Class of 2019, has long been considered a Kentucky-lean. But he’s also currently living in Memphis, having played his junior season at East High School for Penny Hardaway. He’s at Peach Jam playing for the Bluff City Legends, a team that, up until March, when Penny was hired by Memphis, was named Team Penny.

In Wiseman’s first game on Wednesday night, when he was facing off with the No. 2 player in the class, Vernon Carey, we had this scene courtside: 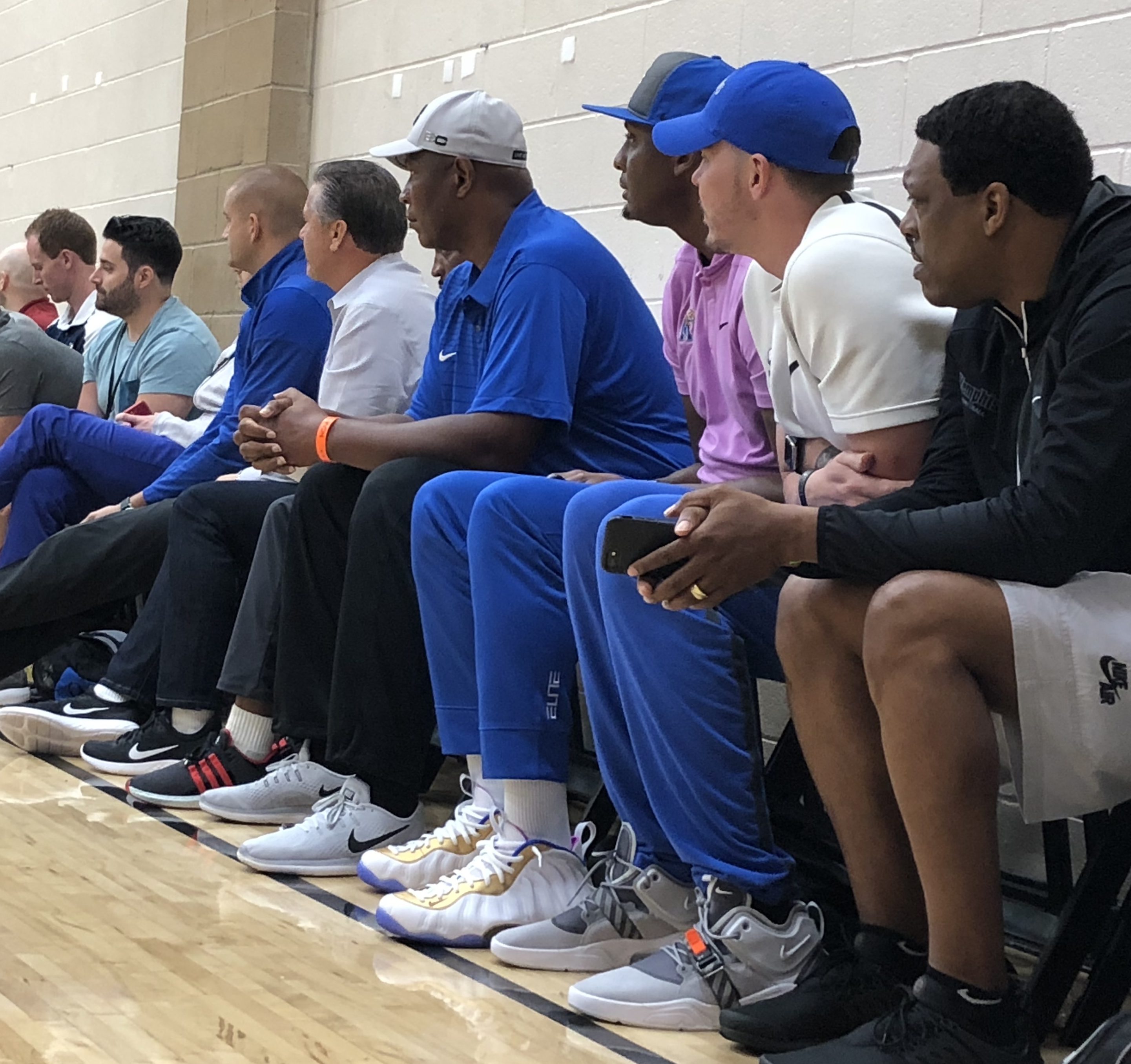 That’s Penny, the current Memphis head coach, and his assistants, Mike Miller and Tony Madlock, sitting next to John Calipari, the former Memphis head coach, and his entire staff, all of them there recruiting a kid that lives in Memphis and might end up being the No. 1 pick in the 2020 NBA Draft after he decides whether he will play his college ball for the Tigers or the Wildcats.

And this year’s Peach Jam may be the last time we see that.

As I reported last month, the NABC is proposing rule changes to the Condoleeza Rice-led Commission on College Basketball that will change the way that summer recruiting works. Instead of three five-day periods where coaches are allowed to be on the road, scouting and evaluating players at grassroots events around the country, the NABC is proposing a series of regional camps that thousands of players nominated by Division I coaches will attend, with the best of the best then attending a national camp. It would be run by USA Basketball, feature coaches from the G League, Division II and Division III and even NBA players leading drills and coaching teams, and — most importantly — be the only place in July where coaches are allowed to attend.

To rid youth basketball of the stranglehold that summer coaches have on the recruitment of players around the country.

And quite frankly, it is a terrible idea, one that is a reactionary PR move being made to convince the public, people that don’t know what the hell they’re talking about, that the NCAA is trying to change after the FBI’s investigation into corruption in college basketball.

I spent 36 minutes explaining why on Tuesday’s podcast, so I’m not going to go into the specifics again. If that’s what you’re looking for, listen below.

What I will say here is this: I am currently at Peach Jam. I have spent the last 24 hours talking with coaches from all levels of the sport about these impending changes, and I cannot find a single one that thinks these changes are a good idea.

Not a single one.

The most positive response I have heard: “I guess we’ll make it work whatever the rules are.” That was from a coach that has been in the Final Four recently.

One coach told me that this is the kind of rule that will get changed in three years when people realize how stupid it is. Back in 2003, the NCAA passed a rule that eliminated the April live period, and by 2011, the coaches had successfully argued their way back into being at “non-scholastic events” in the spring. They wanted to be at the events, because it didn’t take long for them to realize that banning themselves from the biggest events did not actually kill off those events.

Just like this rule is not going to kill off shoe company-sponsored events like the EYBL or the random, assorted AAU tournaments that pop up all over the country every July.

The coaches just won’t be in the gym.

It’s not going to stop the games from being played, it just means they’ll be paying to watch a choppy live-stream of the games that keeps getting pixelated instead of paying for a packet to sit on chairs that are too close together and bleachers that couldn’t be more uncomfortable.

And the irony of it all is that this is self-inflicted.

The NABC is the National Association of Basketball Coaches. The people proposing are the coaches themselves.

So this is my plea: One of those coaches that is for this change and that helped put this into motion needs to come out publicly and say so. We need an explanation as to why these changes are needed, and why they aren’t idiotic. Someone needs to own this.

Because as far as I can tell, no one actually in the gyms thinks this is going to help.