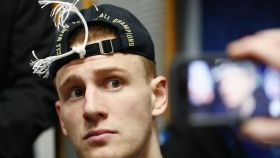 For the first time since 2004, two No. 1 seeds have been knocked out of the NCAA tournament before the first weekend has come to a close.

This upset came on the heels of No. 1-seed Virginia becoming the first top seed in tournament history to lose to a No. 16 seed when they fell at the hands of UMBC on Friday night. If that isn’t consolation for Xavier fans, maybe this will be: The Musketeers aren’t the only top five team from the Queen City to blow a lead on Sunday. No. 2-seed Cincinnati was dropped by No. 7-seed Nevada, who erased a 22-point lead in the final 11:43 to land the second-biggest comeback in NCAA tournament history.

With that, Florida State is on to the second weekend of the tournament. Braian Angola led the way for the Seminoles, scoring 16 points to lead five players in double-figures. It really is a fairly remarkable feat that Leonard Hamilton was able to get this team this far in the dance, but the story here is not the Seminoles.

Let’s start with this: J.P. Macura was robbed. He picked up three fouls in the second half that were all questionable-at-best calls. The first one was a block from behind and a fast break layup. He pinned the ball on the backboard cleanly, but he drilled the shooter with his chest hard enough that getting a whistle wasn’t the worst thing in the world.

A couple minutes later, Macura cleanly picked the pocket of a Florida State’s Mfiondu Kabengele but was whistled for his fourth foul, which sent him to the bench with 8:55 left in the game and the Musketeers ahead 59-48. He came back in the game after a Florida State run cut the lead to two points, but he fouled out of the game on a questionable charge call with just over two minutes left.

Then there’s Trevon Bluiett. Xavier’s all-american was a non-entity on Sunday night. He finished with just eight points on 2-for-8 shooting, and while credit should be given to Florida State for the defense that they played on him, Bluiett needs to shoulder the blame as well. Mack, too. On the final possession of the game, with the Musketeers down three and just 21 seconds on the clock, Bluiett didn’t touch the ball before Kerem Kanter airballed a three with seven seconds left. On the possession prior to that, he fell down in the lane trying to score the go-ahead bucket.

It certainly wasn’t the most impressive finish that we’ve seen to a basketball game.

But that isn’t the biggest storyline coming out of this game.

More specifically, where Chris Mack will be coaching next season is.

Mack has been at Xavier since 2004. He’s been the head coach of the Musketeers since 2009. He’s also the guy that Louisville has targeted to be their next head coach, sources told NBC Sports. Mack has been pursued by bigger programs before — he was linked and/or pursued for every big coaching hire made in the last two years, from Georgetown to Indiana to Ohio State — but Louisville may just be the job that he would consider leaving Xavier for.

But his wife is from Louisville. And the Louisville program, while mired in scandal now, is one of the ten best jobs in America. It might be top five, depending on who you ask. Rick Pitino made triple the salary that Mack is making with an ACC budget and ACC pedigree as one of the flagship basketball programs for Adidas.

Throw in the fact that this is coming at a time when Mack will be losing his two best players to graduation, and the dots connect.

We should get an answer sooner rather than later.

Until then, Xavier fans will be left to stew over a bitter end to a season that had so much promise.

If this is it for Chris Mack with the Musketeers, it sure wasn’t a storybook ending.