The Atlantic 10 has been down this season as the league tries to sneak two (or possibly three) members into the Field of 68. It feels like a decade ago when the Atlantic 10 got six members in the NCAA tournament in 2014.

Since the league suffered its worst collective non-conference record in over a decade, the Atlantic 10 struggled with computer numbers and quality teams this season. Rhode Island and St. Bonaventure were clearly the only two dominant teams in the league.

While the Atlantic 10 isn’t nearly as deep top-to-bottom as it has been, there are still some dangerous teams to keep tabs on this week in Washington D.C. 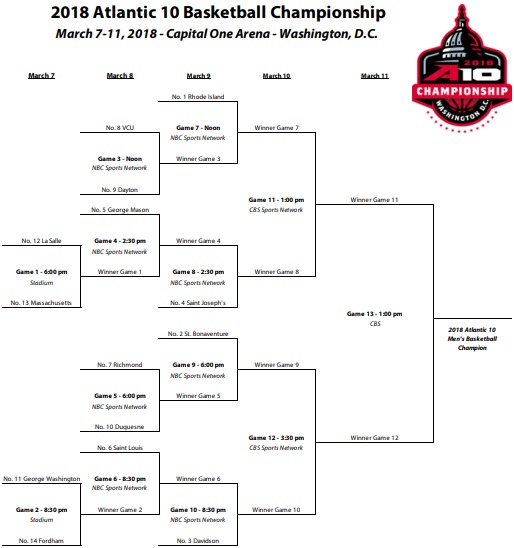 St. Bonaventure enters the week as the No. 2 seed in the tournament but they’re arguably the hottest team in the country right now. The Bonnies have won 12 straight games as they haven’t lost since Jan. 19. Armed with one of the best backcourts in the country in Jaylen Adams and Matt Mobley, St. Bonaventure is playing its best basketball heading into the postseason.

Rhode Island has been the dominant team in the Atlantic 10 for much of this season. The Rams won 16 straight games during the middle of the regular season as it looked like they might run away with an unbeaten conference regular season. But Rhode Island has recently seen some struggles as the Rams have dropped three of their last five games. Plus, No. 1 seeds have a bizarre lack of success in this tournament. Since 2006, the No. 1 seed has more first-game exits (five) than titles (two).

Davidson has become an intriguing team to watch as they enter the tournament winners of five of their last six games. The Wildcats just knocked off Rhode Island for a huge road win to end the regular season and senior Peyton Aldridge is one of the league’s best players.

Since Rhode Island has lost two consecutive games, and three of its last five, then they can badly us a couple of wins this week heading into the NCAA tournament. While the Rams were once considered to be a threat to earn a really good seed, another bad loss could put them in jeopardy of being a double-digit seed with a tough first-round opponent.

Both Rhode Island and St. Bonaventure look like they should be comfortably in the field heading into this week. The next closest team to making the NCAA tournament in the Atlantic 10 would be Davidson, but they would need to win the tournament and earn the autobid to get a spot.

Saint Joseph’s finished fourth in the standings after a strong end to the season. Winners of six of their last seven games, the Hawks have been dangerous as they won at Rhode Island in a shocking 30-point drubbing a few weeks ago. Shavar Newkirk and James Demery are one of the best one-two punches in the league as they could carry this team to plenty of more wins in Washington D.C.

Jaylen Adams, St. Bonaventure. One of the most potent offensive players in the country, Adams is going to have to help carry the Bonnies if they want to win this tournament. Shooting 47 percent from three-point range on the season, Adams is capable of going for monster outings — as evidenced by his back-to-back 40-point games during conference play. If Adams and fellow senior Matt Mobley are both going then St. Bonaventure is tough to stop.

– St. Bonaventure’s rotation: Over the last eight games, Mobley and Adams are averaging over 40 minutes per game.  They almost never get subbed out. If the Bonnies are going to win three games in less than 48 hours, they’ll need more from their bench.
– Rhode Island’s perimeter shooting: Sitting at 33 percent from three-point range on the season, the Rams have been a streaky team from the perimeter. Leading scorer Jared Terrell sits at a healthy 41 percent on the season but the rest of the roster will need to knock down some shots during the week.
– George Mason’s late-game heroics: The Patriots are a tough No. 5 seed — especially if the game is tight down the stretch. George Mason earned four A-10 wins on game-winning shots in the final seconds this season. They also won in the second round of the A-10 tournament on a buzzer-beater last year.