In what has been a tumultuous season for the Pac-12, beginning with the still-ongoing FBI probe and some misbehavior in China, the league’s 12 teams meet in Las Vegas to determine who will earn the automatic bid to the NCAA tournament.

Arizona, the preseason favorite, won the conference by two games and after an eventful week will arrive at T-Mobile Arena at full strength. Sean Miller’s Wildcats will be favored to win the tournament for the third time in the last four years, but it won’t be easy due to the desperation many teams will be playing with.

UCLA, USC and Washington still have varying amounts of work to do depending upon who’s doing the prognosticating, Arizona State may need wins when it comes to their NCAA tournament seeding, and then there are dangerous teams such as Stanford, Utah and Oregon that need the automatic bid if they’re to play in the Big Dance.

That should all make for an entertaining four days in Las Vegas. Here’s a look at the 2018 Pac-12 Tournament. 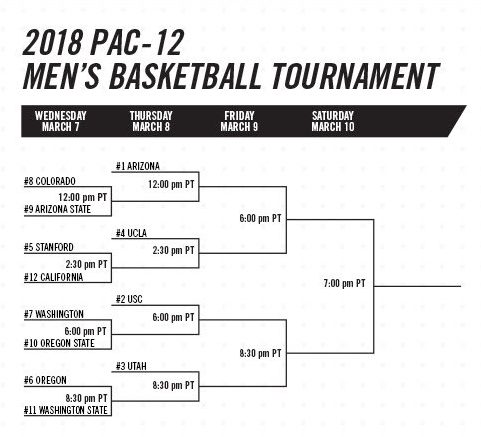 It’s Arizona. The Wildcats went 15-3 in conference play, which is quite the achievement given the turmoil surrounding the program. Sean Miller and Allonzo Trier are back after missing both games of the Oregon trip for far different reasons, and in DeAndre Ayton the Wildcats have the conference’s best talent. Add in the likes of Rawle Alkins and Dusan Ristic, and this group has the pieces needed to win three games in as many days. Arizona may not defend as well as past Miller-coached teams have, but the Wildcats are still the best that the Pac-12 has to offer.

There will be no shortage of contenders in Las Vegas, beginning with UCLA and USC. While the Bruins are the four-seed this week, they’ve got one of the conference’s best players in point guard Aaron Holiday and contributors such as Thomas Welsh and Kris Wilkes aren’t slouches, either. The key for UCLA will be the health of Jaylen Hands, who missed Saturday’s win at USC with a sprained ankle. The Bruins can win without Hands, but to play three games in as many days they’ll need all hands on deck.

As for USC, the Trojans are still a force to be reckoned with despite losing Bennie Boatwright to a season-ending knee injury last month. Jordan McLaughlin and Chimezie Metu form one of the conference’s best inside/out tandems, and the Trojans have talented options throughout the rotation. And it should also be noted that USC finished conference play second in defensive efficiency (conference games only) per Ken Pomeroy’s numbers. Utah, which surprised more than a few people by finishing third, and a Stanford team that’s whole after seeing multiple players miss time due to injury, should not be ignored either.

Both L.A. schools are in a position where they would be well-served to pick up at least one win in Las Vegas. But the pick here is Washington, which will begin its tournament with Oregon State in Wednesday’s first round. Mike Hopkins’ Huskies have wins over Kansas (in Kansas City) and Arizona that will certainly help their cause, and with just one Quadrant 3/4 loss (at Oregon State in double overtime) they’ve avoided the kinds of losses that stick out in a negative way. Taking care of the Beavers would set up a matchup with USC, a team the Huskies beat in Los Angeles during the opening weekend of conference play.

The L.A. schools and Washington enter this tournament on the bubble, and as mentioned above the Huskies begin with a matchup against Oregon State that would be damaging to their profile should they lose. Both UCLA and USC have first round byes, and should the games play out according to seed the Bruins would draw a tough matchup in Stanford while the Trojans would get Washington. Arizona State should be safely in the field, but taking care of Colorado and at the very least showing well against Arizona would likely ensure that they’ll wear home uniforms in the first round of the NCAA tournament.

Stanford as the 5-seed may classify as a sleeper, and it should be noted that with Reid Travis leading the way this is a group with the talent needed to make a run in Las Vegas. With Travis, Michael Humphrey and Dorian Pickens the Cardinal don’t lack for experience, and they’ve also got some young talented contributors as well with Daejon Davis and Oscar da Silva being two of the noteworthy underclassmen. Also, Arizona State as the 9-seed makes the Sun Devils a candidate for sleeper status. Bobby Hurley’s backcourt ranks among the best in the country, with Tra Holder leading the way, and they’ve got some big wins to their credit. But in order to make a run, the Sun Devils will have to tighten things up defensively and on the glass.

Aaron Holiday, UCLA. Ayton is the league’s best player and could very well be the first player selected in this summer’s NBA Draft. But given the stakes, not to mention the way in which he’s played throughout the season, Holiday is the one to watch. After ending the regular season with a 34-point, seven-assist, five-rebound masterclass against USC, Holiday is more than capable of carrying the Bruins on a run that would ensure them of an NCAA tournament bid.

– Arizona vs. Everybody. While the Wildcats won the regular season title, this has not been a smooth run by any stretch of the imagination. This team’s mindset going in, especially if they can properly turn the outside noise into positive fuel, will be something worth keeping an eye on.
– Oregon. The Ducks don’t lack for talent, and it could be argued that their portion of the bracket (Washington State, then Utah if they win) sets up well for a run. But it should be noted that the Ducks lost to Wazzu in Pullman last week.
– Utah’s defense. The Runnin’ Utes finished seventh in the conference in defensive efficiency (league games only), but they have been better on that end of the floor. And with first team all-conference guard Justin Bibbins and a quality big man in David Collette leading the way, if they can continue that progress it wouldn’t be a shock if Utah managed to reach Saturday night’s final.