While the final standings of the Big 12 may have been predictable, the conference’s tournament is going to be anything but. When a league is projected to get up to 80 percent of its members into the NCAA tournament, “anything is possible” isn’t a cliche or tired slogan, it’s honestly a reality.

Kansas won its 14th-straight Big 12 regular season title, setting the standard for dominance in this recent era, but the Jayhawks did it this season without an overwhelming talent or athletic advantage that has so often been the mark of Bill Self’s teams. In fact, there was a fleeting moment when it looked like the Jayhawks’ streak may come to an end. It was a moment, albeit a silly one.

The story of the Big 12 tournament is that there are legitimately nine teams that conceivably could be the last one standing at the Sprint Center in Kansas City, and the 10th-place team, Iowa State, has been beset by injuries but the Cyclones have won three of the last four Big 12 tournaments, boast a fanbase that invades Kansas City and have three wins over ranked teams themselves.

So the question becomes not only who will win the Big 12 tournament, but how many teams will the league get into the Big Dance? If it’s eight, that will set a record for highest percentage of a conference’s teams earning bids ever. Things may have to break just right – and if they break perfectly maybe we’re talking about nine – that might be the most likely scenario, not just a long-shot one.

It’s the Big 12. Who knows what’s going to happen? 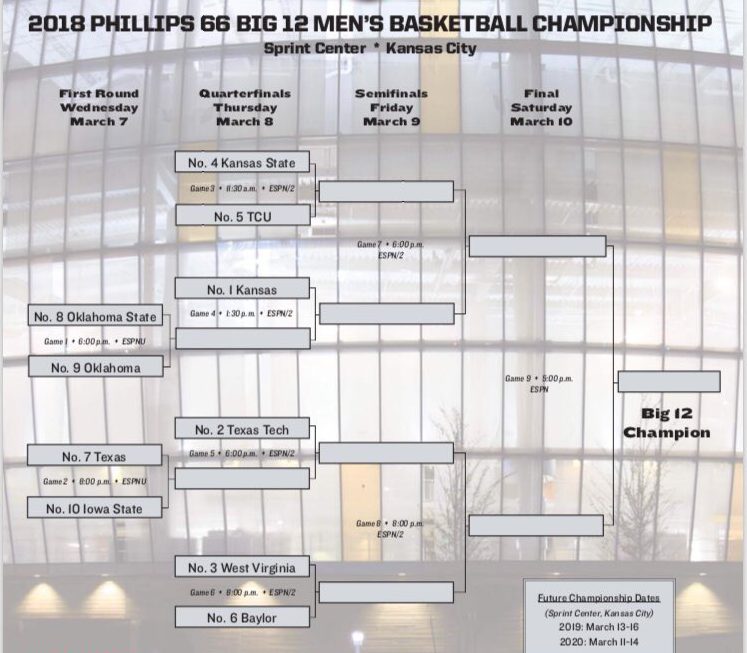 Despite having perhaps his weakest and most ill-fitting roster, Bill Self got the Jayhawks on top of the heap once again, even giving them enough leeway that dropping a second game to Oklahoma State in the regular-season finale didn’t hurt them. Kansas may not look like one of heavy national title contenders – despite being in line for a one-seed – in the eyes of most, but there’s pretty convincing argument that this is the most impressive of the Jayhawks’ 14 titles, especially when you consider the strength of the rest of the league

Still, the Jayhawks are vulnerable on a number of fronts. The defense can be beat, they’re 3-point dependent and Self has struggled to motivate some of his players at different times this season, complaining about effort and focus.

They’re the favorite, but not an overwhelming one.

If Keenan Evans doesn’t get hurt, we very well could be talking about Texas Tech as the team that finally ended Kansas’ reign. After looking like a potential Big 12 player of the year, a toe injury sapped Evans’ ability to the point where a player who was routinely putting up 30 a night suddenly couldn’t even crack double-digits. It’s not surprising the Red Raiders lost four-straight – and a potential conference crown – with Evans on the mend.

Evans, after missing a game against West Virginia, returned over the weekend and got 23 against TCU, signalling he may be ready to go this week and keep Kansas from winning another Big 12 title this season.

The other frontrunner here has to be Bob Huggins and West Virginia. The Mountaineers had a late-January lull, but have otherwise been solid. They don’t make a ton of shots, but here’s betting their style of play can wear down opponents in a game-a-day format.

It’s easily Oklahoma. Sure, Kansas State, Baylor and Oklahoma State could all use a dub, but the Sooners would be toying with an epic and embarrassing collapse if they lose in the first round and somehow find themselves outside the Field of 68. This is a team that spent much of the season’s first two months looking like a Final Four contender while Trae Young carved up the country.

Now the Sooners are hanging on for dear life having lost seven of their last nine and Young looking completely human. They could lose to Oklahoma State on Wednesday and still sneak in, but they’ve got the most to lose should they falter.

The Sooners’ spot is tenuous while Kansas State and Baylor both have to be thinking that one win in Kansas City ought to get them in the field. Oklahoma State probably will need a couple wins to counteract a non-conference schedule that features a win over Florida State and not a whole lot else. The good news for the Cowboys is it looks like they just might have the Jayhawks’ number should the two teams meet in Thursday’s quarterfinal.

When Jaylen Fisher went down to injury, it was a major blow to TCU, but the Horned Frogs come to KC playing good ball. They fell to Texas Tech in the finale in Lubbock, but had won four-straight before that. Their offense is absolutely elite with plenty of shooters around Vlad Brodziansky, who can step out and stroke it himself. TCU’s defense may be suspect, but the way they can spread you out and fill it up makes them a sneaky pick to be hoisting a trophy Saturday night.

I know you’re probably tired of hearing and reading about him, but no player has more at stake at the Sprint Center than Trae Young. It wasn’t so long ago that you couldn’t mention his name without quickly comparing him to Steph Curry, and it was just a few weeks back when his lead in the national player of the year race looked insurmountable.

Young’s legacy as a college player will be decided in the next couple weeks. Well, it could be if the Sooners’ season doesn’t end Wednesday night. Whatever struggles Young has had the last few weeks – and he was right when he said he gets guarded like no other player in the country – he can quiet all his critics with one monster month of March.

– Teams are going to key on Devonte Graham and Svi Mykhailiuk and surround Udoka Azubuike, so Kansas is going to need to get contributions from Malik Newman. If Newman can provide some pop offensively, Kansas will be in good shape.

– How healthy is Mo Bamba? The Texas freshman is dealing with a toe injury that coach Shaka Smart said makes him questionable heading into play this week. The Longhorns may not need Bamba to get past Iowa State in their opener, but if they have designs on making a serious run this week, they’re going to need their man in the middle. When he’s on his game and playing at his best, he has the ability to completely change the dynamic of a game.

– Try making sense of Baylor. The Bears opened Big 12 play with 2-7 mark before reeling off five-straight to get back in to the NCAA tournament conversation. Now, though, Scott Drew’s team has lost three of its last four. The team that won five straight can win this thing. The team that started and finished the Big 12 slate could easily go out Thursday.

COACH OF THE YEAR: Bill Self, Kansas