The goal of the Mountain West in recent years has been to get back to the days earlier this decade in which the conference could count on multiple teams going to the NCAA tournament. There’s still work to be done in this regard, as the 11 teams will arrive in Las Vegas knowing that only regular season champion Nevada is well positioned to hear its name called on Selection Sunday.

Despite seeing multiple players suffer injuries throughout the course of the season, Eric Musselman’s Wolf Pack won the Mountain West by two games. Led offensively by twins Caleb and Cody Martin, forward Jordan Caroline and guard Kendall Stephens, Nevada may not be that deep but the team doesn’t lack for talent or experience either.

That being said Nevada won’t lack for challenges in Las Vegas, especially with Fresno State and San Diego State on their side of the bracket. Leading the way on the bottom half of the bracket is two-seed Boise State, which has some work to do in order to ensure itself of an NCAA tournament bid.

Here’s a look at the 2018 Mountain West Tournament, an event that’s been won by the top seed twice in the last five seasons. 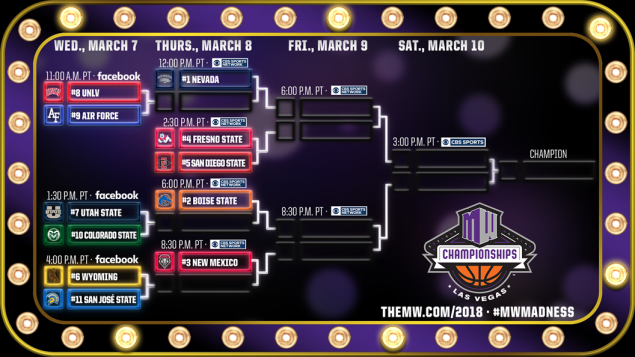 Even with Saturday’s loss to San Diego State in the regular season finale, Nevada has earned the label of favorites heading into the tournament. Boasting a 15-3 league record, the Wolf Pack had the Mountain West’s most efficient offense and defensively led the conference in both effective field goal and three-point percentage defense. Nevada’s top four scorers, led by Caleb Martin at 19.5 points per game, have combined to account for nearly 65 points per game on the season. And without Lindsey Drew, who went down with a ruptured Achilles last month, the Martin twins, Caroline and Stephens have even more on their plates.

But if a Josh Hall, who chipped in with ten points in Nevada’s win at UNLV on February 28, or Hallice Cook can step forward this week that would bode well for the Wolf Pack. What also helps this team is the fact that they take care of the basketball, as their 9.1 turnovers per game were by far the least in the Mountain West. That being said, they’ve got a tough half of the bracket to navigate.

Boise State leads this list, due in large part to the presence of senior guard Chandler Hutchison. Averaging 19.5 points, 7.6 rebounds and 3.5 assists per game, Hutchison leads the Broncos in all three statistical categories. While Leon Rice certainly has other options he can call upon offensively, led by Christian Sengfelder and Justinian Jessup (who’s shooting 46.7 percent from three), when a big play needs to be made it’s Hutchison who will have the ball in his hands.

After Boise State, New Mexico and San Diego State both deserve mention. Paul Weir led the Lobos to a 12-6 record in league play, and after being stuck on the bench his first two seasons in Albuquerque Anthony Mathis has emerged as the team’s leading scorer. And UNM capped the regular season with a win over Fresno State. As for the Aztecs, after getting blown out by Nevada on February 10 Brian Dutcher’s team won its last six to finish the regular season. SDSU is balanced offensively, with Malik Pope leading four double-figure scorers, and freshman Jalen McDaniels is going to be a star in this league.

Boise State. With Nevada due to pick up an at-large bid if it doesn’t win the tournament, that leaves the Broncos as the only other team in the Mountain West that has a shot at reaching the NCAA tournament if they don’t win the automatic bid. But that would likely require Boise State reaching Saturday’s title game, at minimum. A win over Utah State or Colorado State in the quarters won’t do much for their resume, and neither would a semifinal win over New Mexico/Wyoming/San Jose State. And it should be noted that if Nevada isn’t the opponent in the final, a close loss could spell doom for Boise State there as well.

Boise State. Ranked 41st in the NCAA’s most recent RPI update, Boise State enters the Mountain West tournament with two Quadrant 1 (Loyola-Chicago and Oregon) and four Quadrant 2 wins to its credit. The RPI likes Boise State more than other metrics, which have the Broncos ranked in the fifties with the exception of the KPI (61). Getting to the final may not be good enough, especially if the opponent in that game isn’t Nevada. Why risk it? Just win the whole damn thing and sleep easy Saturday night.

Given the fact that they aren’t listed with the contenders above, Fresno State would be the best choice here. However, this is a group that is now playing without guard Jaron Hopkins as he suffered a right foot injury in a loss at Wyoming on February 24. Hopkins accounted for 20 points and five assists in the Bulldogs’ home win over San Diego State, their quarterfinal opponent, back on February 6. While many like to parrot the phrase “it’s hard to beat a team three times in the same season,” that’s been proven to be false.

Matchups matter, and Fresno State has some guys who can cause trouble in Deshon Taylor and Bryson Williams. The Bulldogs can account for the loss of Hopkins, especially with the time off between the end of the regular season and the start of the conference tournament. The bigger concern regarding Fresno State is the way that San Diego State is playing of late. As for any other sleepers, Wyoming is a team worth monitoring with Justin James and Hayden Dalton leading the way for Allen Edwards’ team. With San Jose State being the opponent in their tournament opener, Wyoming will likely face New Mexico for the third time this season in the quarters (UNM won both meetings).

Caleb Martin, Nevada. Martin, one of the top transfers in the country, is averaging 19.5 points, 5.3 rebounds and 2.5 assists per game on the season, shooting 47.3 percent from the field, 43.1 percent from three and 75.4 percent from the foul line. Martin going off over the course of three days, especially when he’s scored 20 points or more in 17 games this season, would surprise no one. And frankly, he’s a fun player to watch.

– Does Nevada’s lack of depth catch up with it due to the quick turnarounds? Three games in as many days could be a tough ask for the Wolf Pack, but the versatility of the players available should help matters.

– UNLV’s mindset. The Runnin’ Rebels lost five straight to end the regular season, with four of the losses being by double digits. There’s enough talent on this roster to cause some trouble, but given the beating they took at the hands of rival Nevada at Thomas & Mack on February 28 (101-75) who knows what this team will be thinking if the teams meet for a third time on Thursday.

– San Diego State’s defense. Long known for its commitment on that end of the floor, during a stretch in which it went 2-6 SDSU allowed 77 points or more in seven of those games (losing six). The Aztecs have defended better during the current six-game win streak, and if that carries over into Las Vegas maybe they make a run.