I’m always torn in regards to the WCC tournament.

On the one hand, upsets in events like this are what makes March great. Everyone loves seeing that No. 9 seed knock off the league’s regular season champ en route to a surprise trip to the finals.

On the other hand, everyone in the WCC not named Gonzaga, Saint Mary’s or BYU is just not that good, and that’s concerning and has been a concern for years.

Which is part of the reason that Gonzaga and BYU would consider leaving the conference for the Mountain West, a league with more basketball pedigree. The question that would be most interesting for me is whether or not that would be a good thing for the West Coast Conference as a whole. On the one hand, losing one of college basketball’s top 15 programs is going to hurt. But on the other hand, it’s not possible for anyone else to win in that league. It’s been more than a decade since a head coach has left the WCC without getting fired or resigning. Any job you can get in that conference is a dead-end job because Mark Few, Dave Rose and Randy Bennett aren’t, or haven’t, left.

If the programs at the bottom of the league could start hiring better coaches because coaches know they’d have a chance to use that job as a stepping stone, it would, in theory, create a space for another Saint Mary’s to be born.

Whatever the case is, that’s something that will be worth monitoring in the coming months and years. 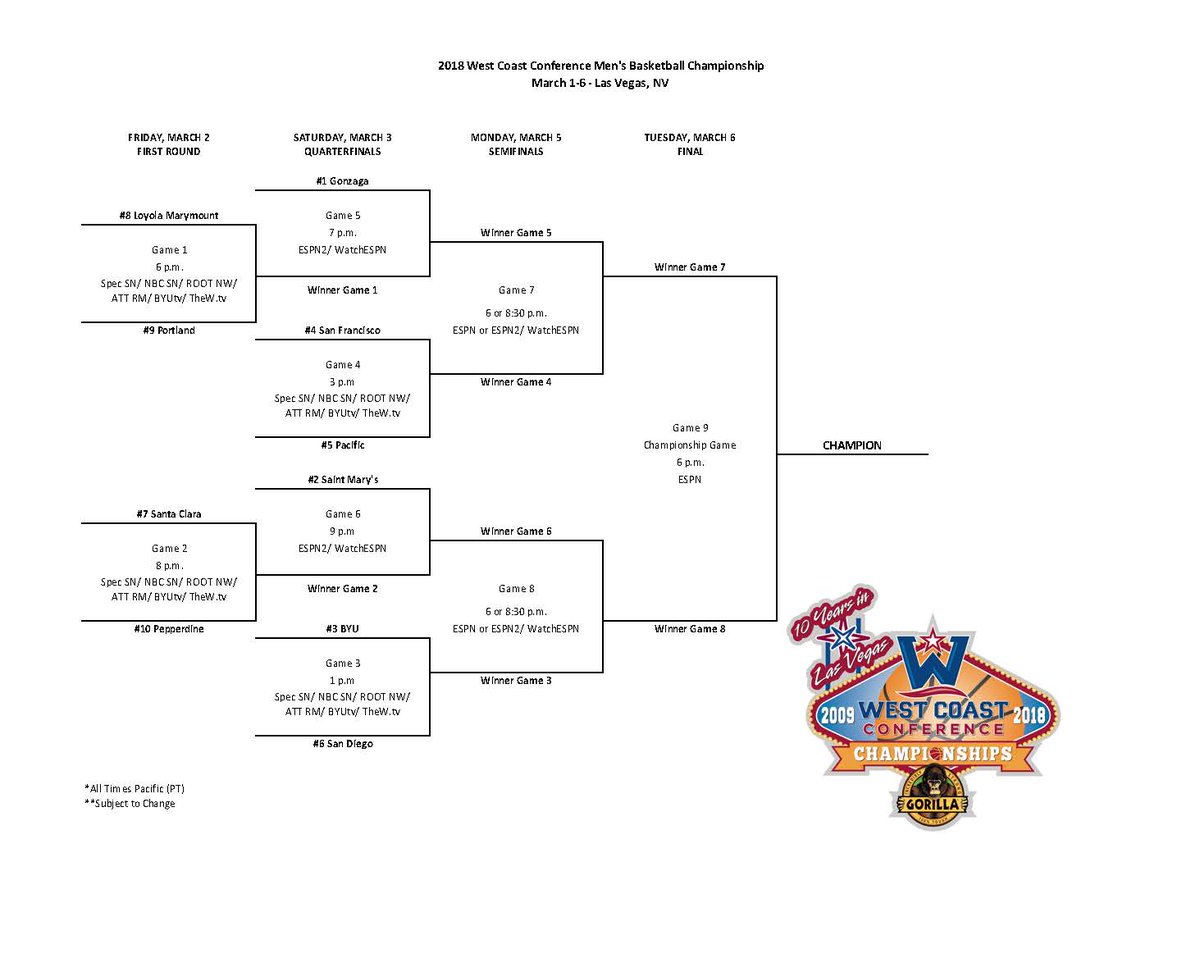 Can you call anyone other than Gonzaga a favorite for anything in the WCC? At this point, I’m not sure that you can.

I have a take on Gonzaga that I haven’t had a chance to eschew anywhere else, so I’m going to use this space to talk about it: The success that the Zags have had this season, where they are a top ten team on KenPom, is a more telling indicator of the strength of that program than getting to the Final Four a season ago was.

Anyone with any basketball sense knew that Gonzaga was good enough to be a Final Four team before the actually became a Final Four team. Weird things happen in a one-game, knockout tournament — things like blowing 17 point leads to UCLA or 14 point leads to Wichita State — which is why I think earning a No. 1 seed is more of a sign of program strength than getting to the Final Four. VCU, LSU, George Mason. They’ve all been to a Final Four since Gonzaga became Gonzaga. Before last season, which program would you say was better?

But the Zags lost so much off of last year’s team. Not only did they lose a pair of key seniors, but both Zach Collins and Nigel Williams-Goss left earlier than expected. And even with all those departures, Gonzaga is still a top ten team thanks to the fact that they had talents like Killian Tillie, Rui Hachimura and Zach Norvell biding their time.

Personally, I didn’t need any convincing, but if you did, you shouldn’t anymore.

The only two teams that I think have a real shot at picking off Gonzaga are Saint Mary’s and BYU. We all know that the Gaels are good at this point, and they probably have the best player in the league on their roster in Jock Landale. But BYU is really talented as well. Elijah Bryant and Yoeli Childs have made names for themselves this year, and the Cougars should be considered in the mix to win this thing.

Saint Mary’s, and it’s not really all that close. The Gaels have played just two Quadrant 1 games, and both of them were Gonzaga. They beat the Zags on the road and then got smoked by them in Moraga. They’ve only played three more Quadrant 2 games, and they have two Quadrant 3 losses. The conversation will not be that cut and dry when the Selection Committee convenes next week, but the Gaels can certainly not afford a bad loss before the final.

Before Lamont Smith’s arrest and subsequent suspension, I would have said San Diego. Now, I think the teams to keep an eye on are Pacific and San Francisco. USF is the only team to pick off either Gonzaga or Saint Mary’s this season, while Damon Stoudamire has Pacific playing really well given everything that is going on within that program.

Jock Landale of Saint Mary’s is the best player in the conference, but the best NBA prospect could very well be Rui Hachimura from Gonzaga. He’s a 6-foot-9 Beninese-Japanese forward with all the physical tools you could ask for and a sense for the game that is picking up as the season moves along. He’s also the guy that Saint Mary’s has proven to have no idea how to guard.