It may still be February, but March is officially here.

The Big Ten tournament is the first of the major conference tournaments to kick off, and they’ll be doing so in New York City, which is just as dumb of an idea as it sounds. One year after playing their league tournament in Washington D.C.’s Verizon Center, the Big Ten opted to try and get into Madison Square Garden this season. But that’s the Big East’s home in March, which is why the Big Ten was forced to move everything up a week this year.

They played two league games the first weekend in December. The teams in the conference had to pack their league schedule as tight as possible. Everyone played two games a week for the entirety of league play. There weren’t off-days, all so the Big Ten could make the cash-grab of appealing to the New York City market. After all, nothing says Big Ten basketball quite like Rutgers and Maryland.

The league did all this so that they can make as much money as humanly possible off of the part of the country they’re trying to annex into the “Big Ten cable footprint”.

And there still isn’t enough money to be able to pay athletes, because this isn’t just a business and it’s all about getting a scholarship and an education and playing for the love of the game.

*eyes roll through the back of my head* 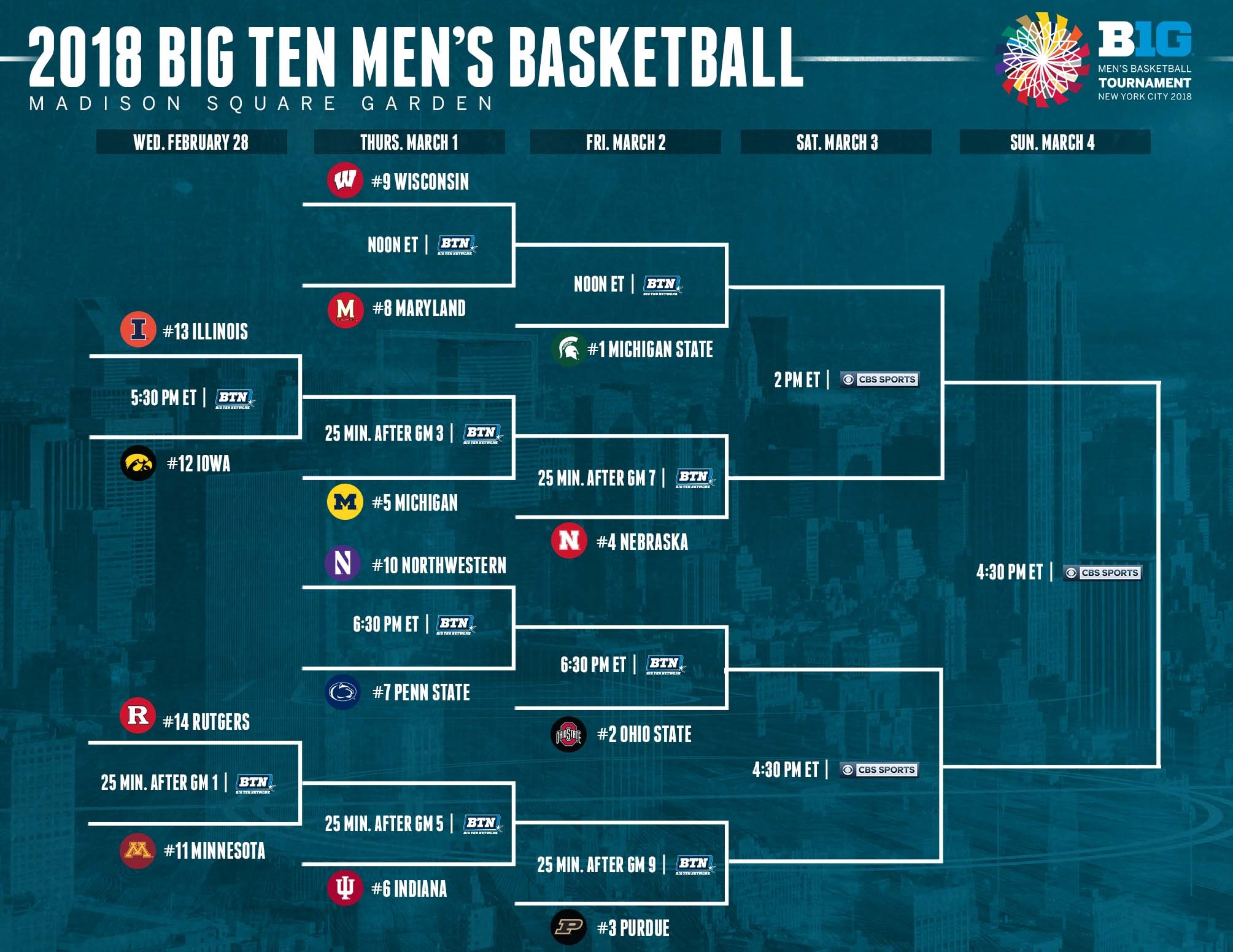 Michigan State is the best team in the Big Ten, just like we all thought they were going to be entering the season.. They won the outright league title, they have the most talent and they are the most difficult to matchup with. I also think that they are currently peaking, as Cassius Winston is learning to takeover games in big moments and Tom Izzo is starting to trust a lineup that features Jaren Jackson at the five and Miles Bridges at the four.

Ohio State and Purdue are the other two teams that were in the mix for the Big Ten title this year. The Buckeyes probably have the league’s best player in Keita Bates-Diop and they enter the league tournament with the most to gain; Purdue and Michigan State are probably going to end up being top two seeds, while Ohio State still has some work left to do to get to that level. Purdue, on the other hand, has just been so impressive this season. They have a star in league guard Carsen Edwards and he’s flanked by four seniors — assuming Vince Edwards will be good to go — that all understand and embrace the roles they are asked to play. When things are clicking for the Boilermakers, they are a machine.

Nebraska, Nebraska, Nebraska. The Cornhuskers is the only argument that you need to show why the Big Ten is just is not all that good. Nebraska will enter the Big Ten tournament with a 22-9 record and a 13-5 mark in the Big Ten, but I’d be willing to wager there aren’t any brackets that currently have them in the NCAA tournament. That’s because they only have one Quadrant 1 win: Michigan, at home. Their draw is perfect, too. As the No. 4 seed, they’ll (likely) get No. 5 seed Michigan in the quarters and No. 1 seed Michigan State in the semis. If they don’t win those two games, I don’t think they get into the tournament.

See above. The only other team anywhere near the bubble is Penn State, but I think they would need to win three games to really be in the discussion.

It’s been weird watching the transformation of Michigan this season. The Wolverines, under John Beilein, have developed a reputation for being an elite offensive team that can struggle on the defensive end of the floor. This year, they are ranked 11th in adjusted defensive efficiency, according to KenPom. They aren’t just a group of shooters with a couple soft bigs that only want to score. They still have those guys, but they also have a young core of tough-minded, defense-first athletes that can grind out wins when they need to. The Wolverines enter the postseason on a five-game winning streak.

Keita Bates-Diop is probably the best player in the Big Ten. Carsen Edwards can absolutely take over a game offensively. Miles Bridges and Jaren Jackson are the two best NBA prospects in the league. But I’m going to go with Wisconsin‘s Ethan Happ. He hasn’t had a great season as a junior, but he’s played much better down the stretch as the Badgers have continued to improve. They won three straight and four out of five — including a win over Purdue — before a season-ending loss by five points to Michigan State at home.