When it comes down to the nitty gritty, there are two things that have to happen for a player to be named the National Player of the Year: They either need to be the best player that happens to play for a national title contender, or they need to put up outlandish numbers on a team that finishes, at worst, as a No. 4 seed.

We’ve gone through this in detail before.

In the last 12 years, just four of the players that won the consensus National Player of the Year award — college basketball is stupid in that there are six recognized Player of the Year awards, but there is almost always a majority winner — have been a member of the team that wasn’t a No. 1 or No. 2 seed. Doug McDermott in 2014, Trey Burke in 2013, Jimmer Fredette in 2011 and Kevin Durant in 2007. Adam Morrison was just beaten out by J.J. Redick in 2006.

McDermott, Fredette and Morrison were No. 3 seeds in the NCAA tournament in the year they won the award. Burke and Durant were No. 4 seeds. All five players — with the potential exception of Burke — had seasons that were statistical oddities.

That’s where Young is right now.

He’s doing something we’ve never seen before — leading the nation in scoring and assists — because Oklahoma is allowing him to play in a way that we’ve never seen someone play before: At the fourth-fastest pace in the country with the entire offense revolving around what he does with the ball in his hands.

The question that I have at this point is whether or not Oklahoma is going to end up being good enough to put Young into that category.

Personally, I would no longer slot the Sooners in as a national title contender. They don’t defend well enough, and the more that opponents throw bodies at Young, the more difficult it is going to be for his supporting cast to help carry the water. They’ve now lost five of their last seven games, and the two wins were a two-point home win against Baylor and a home win over Kansas that was heavily-aided by intentionally fouling Udoka Azubuike.

As it stands, Oklahoma is currently projected as the top No. 4 seed, according to Bracket Matrix, a site that compiles all of the relevant bracket projections in one place. If they go 4-3 down the stretch, as KenPom projects, it’s hard to imagine them finishing that much lower, and at that point, Young almost has to be the Player of the Year.

But let me paint a picture here for you:

Villanova is currently the No. 1 team in the country both on KenPom and in the AP and Coaches polls. Jalen Brunson, as we detailed last week, is on another planet in terms of how efficient he has been this season given the level of usage and importance he has in Villanova’s offense.

That Villanova offense, it should be noted, is historically good. Their adjusted offensive efficiency metric is higher than any in the KenPom era — Villanova is at 131.0, higher than 2015 Wisconsin’s 129.0 — while their raw points-per-possession numbers are even more of an outlier. 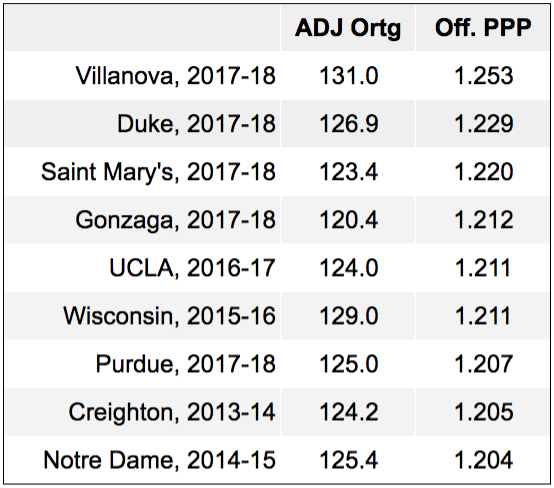 Let me put this another way. Jalen Brunson is currently having a season that, in many ways, is as incredible as Young’s, only he is doing it for the best team in the country as the centerpiece of what may be the best offense we’ve seen in college basketball.

Trae Young is still the Player of the Year as of today.

But Jalen Brunson can still win this thing, too.

And it is a lot closer than anyone is willing to admit.