Yesterday, we took a look at whether or not Duke’s issues on the defense end of the floor will affect whether or not they can win a national title, and barring a dramatic turnaround over the final three months of the season, the answer appears to be yes.

No one with a defense that ranks lower than Duke’s currently does has ever reached the national title game, and only two that are in the same vicinity have even played on the final Monday of the season.

But Duke is far from the only good team with major red flags this season, so today we are going to take a look which of the other national title contenders compare favorably with past Final Four teams.

(All the data in these charts come from KenPom.com. They are the adjusted offensive and defensive efficiency rankings for each team, from prior to the start of the NCAA tournament as well as from the end of the season. We cannot use the adjusted efficiency margin because that data does not translate across seasons. KenPom’s database only goes back to the 2001-2002 season.)

Since 2002, just 13 of the 64 Final Four teams have had an offensive efficiency ranking outside the top 30 when the NCAA tournament began. Only four of those teams reached the national title game, while 2014 UConn is the only one to win a ring with an offense that wasn’t among the best in the country: 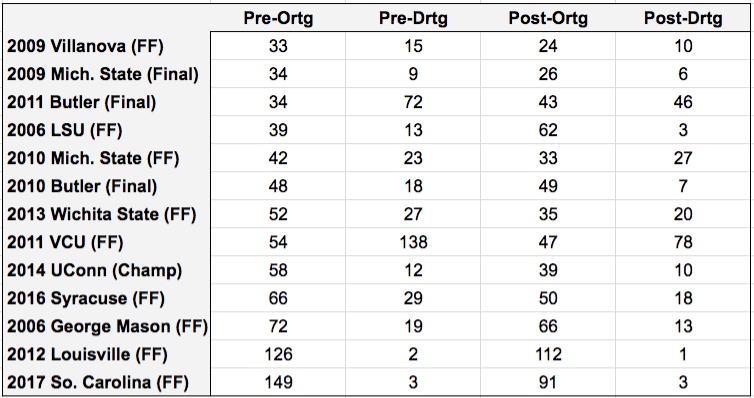 This season, there are a handful of top ten teams – teams that are largely considered among the best in the country – that are ranked outside the top 30 in adjusted offensive efficiency, including a pair of Big 12 title challengers.

Some of these teams you would expect to be on here. Virginia hasn’t lost a step defensively this year, but without a killer like Joe Harris or Malcolm Brogdon, they aren’t among the elite on the offensive side of the ball. The same can be said for Cincinnati, Texas Tech and West Virginia. We know they win with their defense.

The surprise is Michigan.

John Beilein is widely regarded as one of college basketball’s best offensive tacticians, and to see him put together a team that is winning with their defense is … well, it is weird. He and Brad Stevens are the only two coaches to take teams to a title game with a defense that ranked outside of the top 40. 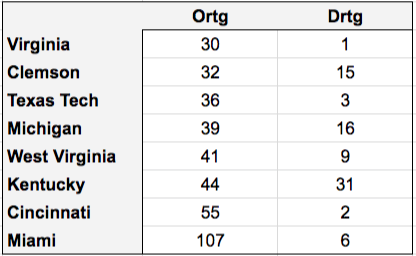 I know that the saying is “defense wins championships,” but that doesn’t hold water in the college basketball realm. While there have only been 11 Final Four teams that ranked outside the top 30 in defensive efficiency prior to the start of the tournament, three of them won the national title and three more reached the title game.

Put another way, it’s easier to win in March with a great offense and future NBA players than it is to win with a great defense that can sometimes struggle to score.

The one difference here is that the floor is not as low.

North Carolina’s 2009 team is the lowest-rated defense at 39th to win a title and they had four players still in NBA rotations today and two more than saw time on an NBA roster as some point.

Where this discussion gets really interesting is when looking at the teams that do not have great defenses this season.

Duke, who currently ranks 72nd in adjusted defensive efficiency, is the team that we always talk about, but there are nine teams that have been ranked in the top five of the AP Poll at some point this season are currently outside the top 25 in KenPom’s adjusted defensive efficiency metric: Wichita State, Kansas, Kentucky, Villanova, Oklahoma, Xavier, Duke, Arizona and Arizona State: 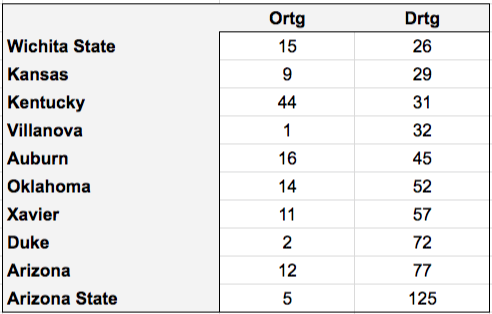 So who can actually win a title this season?

Of the last 16 national champs, 12 have ranked in the top ten of either offensive or defensive efficiency and 15 of the 16 have ranked in the top 20. The only team to win a national title while entering the NCAA tournament ranked outside the top 20 in both offensive and defensive efficiency was Kemba Walker’s 2011 UConn team, and they ranked 22nd and 25th, respectively.

Remember, this can all change rather quickly. If you look at the difference in the pre-tournament ratings vs. the post-tournament ratings below, you can see how much getting hot for a six-game stretch can change things, especially on the defensive end of the floor.

So this is a snapshot of how things stand today. In a two week’s time, these numbers could end up being irrelevant.

With that in mind, here are the six teams that – as of today – ranks in the top 25 of both offensive and defensive efficiency.

For reference, here are the rankings for every national champion of the last 16 years. 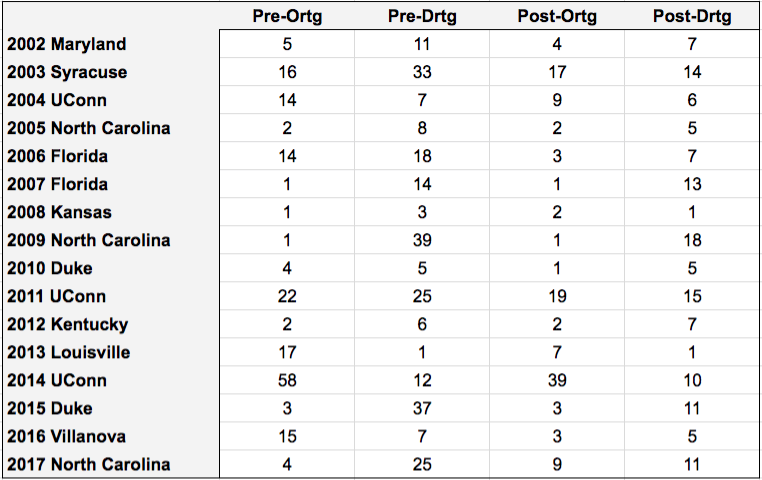