PHILADELPHIA — Trevon Bluiett is one of the very best scorers in college basketball, an all-american candidate that entered this season on the short list of National Player of the Year contenders.

But for more than a month now, the Xavier star has found himself mired in a slump.

Last night, in a blowout loss at No. 1 Villanova, Bluiett shot 4-for-12 from the floor and 2-for-7 from three, finishing with just 11 points, the majority of which came after the Wildcats had taken full control. In Big East play, he’s shooting 34.8 percent from the floor and 29 percent from three, averaging just 16.6 points. Expand that out through the past month, and Bluiett has not shot the ball at nearly the level that he is capable of since a Dec. 9th win over Colorado.

According to head coach Chris Mack, the issue is as simple as confidence. Bluiett is struggling with it right now.

“I think he’s healthy,” Mack said on Wednesday. “He’s been beat up a little bit, but I don’t feel like health is a concern. It’s just between the ears. He’s gotta know his coaching staff, his head coach and his teammates have unbelievable confidence in him. He’ll get it going. He will.”

Bluiett has been streaky throughout his career. As a junior, he had a five-game stretch where he shot 25.5 percent from the floor and 17 percent from three while averaging 10.6 points. Xavier went 2-3 during that stretch, with the only two wins coming against Georgetown and St. John’s. Bluiett scored at least 20 points in five of the next six games, including a win at Creighton, and the Musketeers went 5-1 during that stretch; their lone loss came at Cincinnati, when Bluiett had 40 points on 12-for-15 shooting.

I can keep going.

Bluiett was arguably the best player through the first three games of the NCAA tournament last season, averaging 25 points to lead No. 11 seed Xavier past Maryland, Florida State and Arizona to the Elite 8. He was then 3-for-14 against Gonzaga in a 24-point loss.

In the least surprising news you’ll hear today, Xavier tends to struggle on the nights when Bluiett isn’t making shots – most teams will struggle when their all-american isn’t playing like an all-american – and this has borne itself out over the last eight games. The Musketeers have lost two straight. They needed to come from 16 points down in the second half to beat DePaul at home and erased a 22-point deficit in the final 15 minutes to avoid getting upset by East Tennessee State. Northern Iowa, the MVC’s cellar-dwellers, gave Xavier a fight in Cedar Falls while Marshall nearly picked them off in Cincinnati.

It’s not a coincidence, then, that Bluiett’s two best games in the past month came in wins over Butler and at Marquette.

The question, then, is how can Xavier get Bluiett into a rhythm and out of this slump. I asked Mack that very question last night.

“I have to do a better job of creating some looks for him, some easy baskets so he sees the ball go in early,” Mack said. 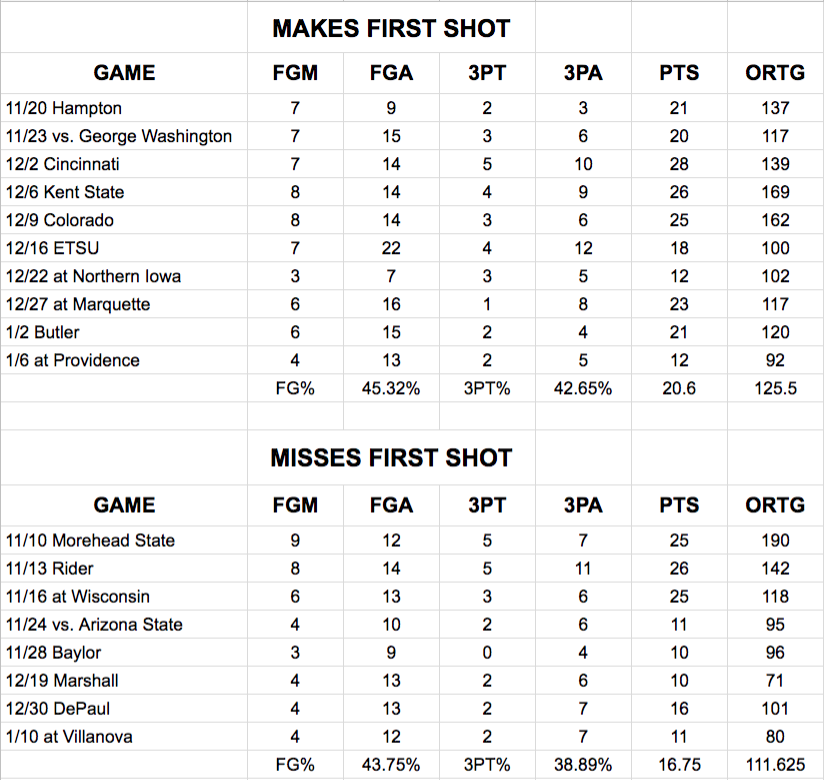 Part of what makes Bluiett so streaky is that he relies heavily on his jump shot to be effective. He doesn’t do all that much damage in the post. He’s not enough of an athlete to be able to slash to the rim. He’s not a playmaker. He’s a streaky shotmaker that can get in his own head when he starts missing, and when those shots stop going in, there isn’t all that much that he does at an elite level.

For the last month, Bluiett has been in his own head.

And until he turns this thing around, Xavier is going to be rather beatable.