PLAYER OF THE DAY

Trae Young is a cheat code.

He finished with 39 points and 14 assists on Saturday. Playing his first Big 12 game. On the road. Against an undefeated top ten team.

And he didn’t even play his best.

All of that is true!

Young had 17 points and four assists in the final ten minutes to help the Sooners overcome a double-digit second half deficit, but he also shot just 9-for-23 from the floor and had seven turnovers, a number that would be higher if you included some of the bad* shots that the took.

But that doesn’t matter anymore.

Because Trae Young is a cheat code.

*Editor’s note: There are not ACTUAL bad shots for Trae Young. Every one of them is a good shot.

THE REST OF SATURDAY’S STARS

TEAM OF THE DAY

Butler landed their biggest win of the season on Saturday, as they broke the century mark against No. 1 Villanova, winning 101-93. The Bulldogs have now beaten Villanova all three times that they have played in the 2017 calendar year. Kelan Martin led the way with 24 points for Butler, who shot 60 percent from the floor and 15-for-22 from beyond the arc. As a team, Butler posted 1.40 points-per-possession against a team that entered the day as a top ten team according to KenPom’s adjusted defensive efficiency metric.

I’m not sure how else I can explain this. It was a ridiculous performance from a Butler team, the first marquee win for them this season and the first statement win for LaVall Jordan as the head coach of the Bulldogs. When it comes down to it, this could end up being the difference between a bid to the NCAA tournament and a trip to the NIT

What does it mean for Villanova? Well, we dove into that here.

GAME OF THE DAY

A thriller in Fayetteville. After trailing for the entire game, Arkansas staged a rally in the final five minutes, eventually forcing overtime against No. 19 Tennessee. The Razorbacks would eventually build an 11-point lead in the extra frame, but Tennessee came storming right back. They cut the lead to two points before a pair of Darryl Macon free throws sealed the win.

Arkansas got a combined 61 points from Macon and Jaylen Barfield as they added another impressive win to their résumé. The Hogs are quietly having an impressive season, one that should get them ranked in the top 25 come Monday and maybe as high as a top four seed come Selection Sunday. We shall see how it all plays out.

For the Vols, this is going to be another tough loss to swallow. They led by nine points with 3:53 left in the game. They also led late against No. 13 North Carolina when they played the Tar Heels in Knoxville early this year. Hell, held a big lead on No. 1 Villanova in the first half back in November. Those are their three losses. Tennessee is having a really good year. They’re that close to having a great year.

No. 6 Xavier trailed by as many as 16 points in the second half against DePaul at the Cintas Center on Saturday, but they turned things around, winning 77-72 in a performance that wasn’t exactly inspiring but that got the job done.

The highlight of the game came midway through the comeback. The referees missed a blatant inbound violation – DePaul’s Eli Cain clearly never established inbounds while receiving an inbounds pass – and Mack ran 15 feet on the court during play to argue the call. He was, clearly, T’d up, and in the process of trying to argue his point, Mack pulled out a whiteboard and tried to diagram what happened for the referee: 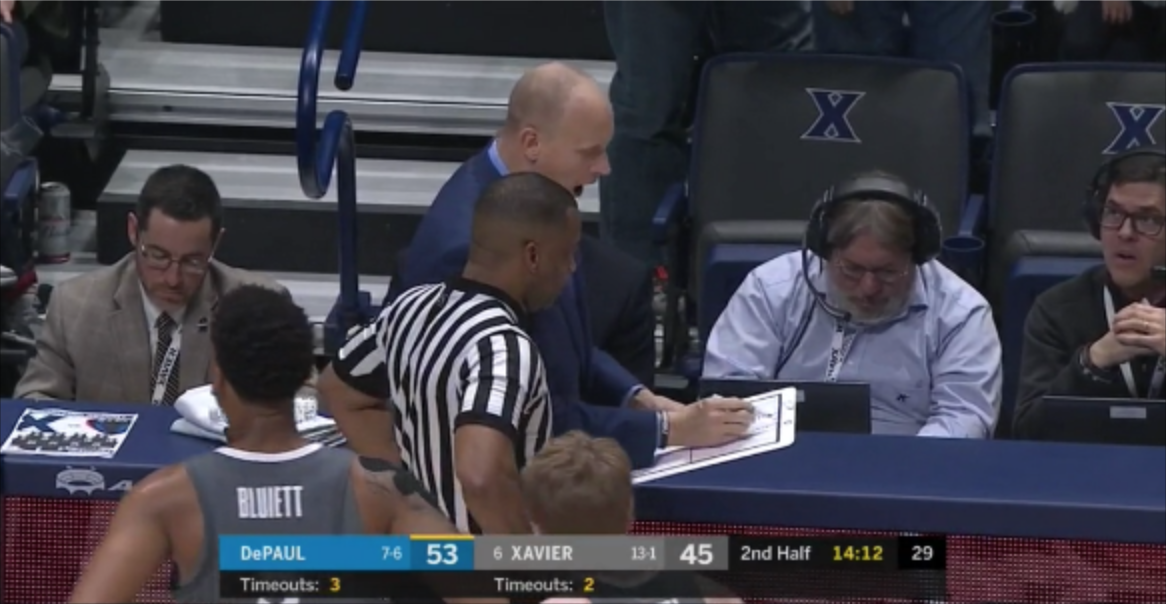 WHAT ELSE DO YOU NEED TO KNOW?

Joel Berry saved the day for No. 13 North Carolina, hitting this floater to give the Tar Heels a late lead as they held off Wake Forest, 73-69:

It came against a shorthanded No. 5 Texas A&M, but Alabama landed themselves a marquee win, blowing out the Aggies, 79-57. That win is going to look great on their résumé come Selection Sunday. It shouldn’t hurt Texas A&M all that much, however. The Aggies were without leading scorer D.J. Hogg and off-guard Admon Gilder, two of their three leading scorers and their two best three-point shooters.

In their first game as a member of the American, No. 8 Wichita State picked up a road win against UConn, 72-62. That sounds more impressive than it actually is. UConn is not all that good at basketball these days, and the Huskies took the lead late in the second half before the Shockers pulled away for good.