1. TRAE YOUNG, Oklahoma: The way the college basketball Player of the Year award is given out is generally pretty simple: Unless there is a player on a good team – i.e. a top four seed – having an insane, outlier season, the award is given to the best player that is on the roster of a team that is a national title contender.

That rule has proven true in every year of the one-and-done era.

That’s why Trae Young has not topped our Player of the Year rankings yet this season.

Because there wasn’t much evidence that he was on a team with a shot of getting a top four seed. I’m still not convinced that is any sort of lock, but as of today the Sooners are now sitting at 7-1 on the season and ranked in the top 25. If they win at No. 3 Wichita State this weekend, that will change. Even if they don’t, playing in a league that is as good as the Big 12 appears to be – no one in the conference ranks lower than 63rd on KenPom – will mean that their computer numbers will get and stay inflated once league play starts.

But here’s the other part of it: Young’s season is such an outlier than the rules may not matter. Assuming he stays on his current pace (I can’t imagine that he actually will, but he might) he’ll do things that have not been done for 27 years, and that may never have been done before. Young is currently averaging 28.8 points and 8.8 assists. The last player to do that was Loyola Marymount’s Terrell Lowery back in 1990-1991.

And as far as I can tell, no player – at least not in the KenPom era, so please correct me if I’m wrong here – has ever posted his level of efficiency on the insane amount of usage he gets in the Oklahoma offense: 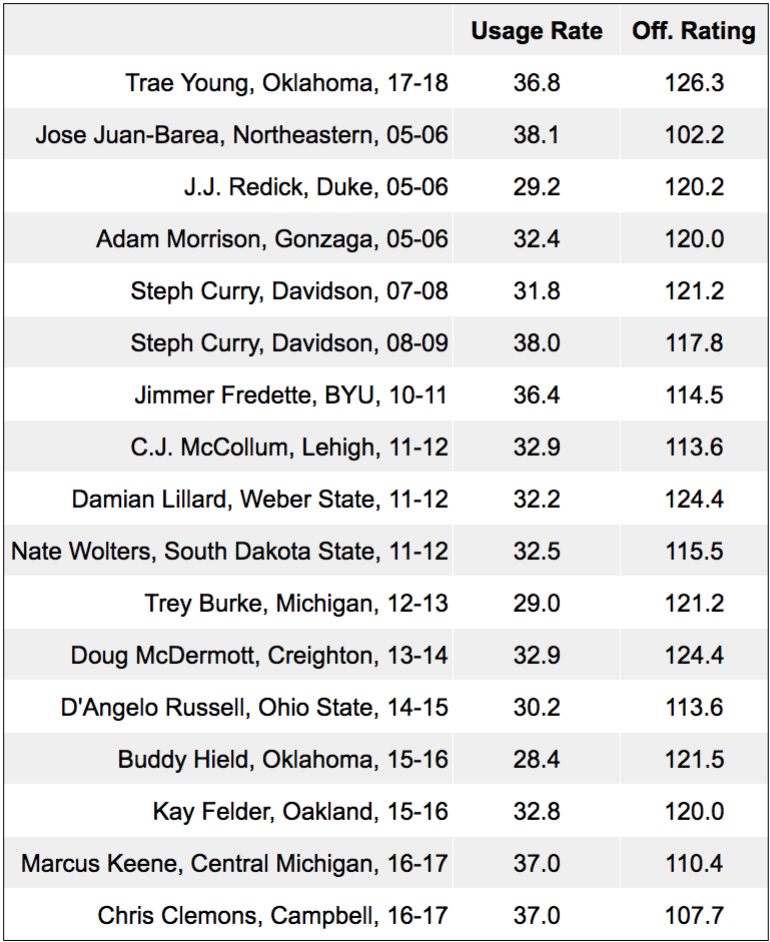 2. MARVIN BAGLEY, Duke: Bagley posted another double-double on Saturday, finishing with 15 points and 12 boards as the Blue Devils took a loss against Boston College, but what was most concerning about that performance was that he took four shots in the second half and three of them were three-pointers. That doesn’t diminish the start that he has had to the season, where he took over down the stretch in wins over Florida, Texas and at Indiana.

3. TRA HOLDER, Arizona State: Tra Holder has been the best player for the most surprising team in college basketball this season. He’s averaging 21.2 points, 5.2 assists and 5.6 boards while shooting 46.3 percent from three on more than six attempts per game. He had 29 points and seven assists in a win at Phog Allen on Sunday. He put up 40 points on Xavier. He’s having a tremendous season.

4. MIKAL BRIDGES, Villanova: Bridges came to the forefront on Tuesday night in the Jimmy V Classic, and in the process took over the lead as Villanova’s Player of the Year option. Read all about that here.

5. TREVON BLUIETT, Xavier: Ho hum, it was another week with a pair of 25-point performances for Bluiett. He’s now scored at least 25 points in six of 10 games this season.

6. DESI RODRIGUEZ, Seton Hall: Rodriguez has turned into Seton Hall’s best player this sason. Last weekend, he had 17 points, seven boards and four assists in a blow-out win over VCU.

7/. JEVON CARTER, West Virginia: West Virginia has completely turned things around after that embarrassing start to the season. Carter has been the catalyst. He’s averaging 19.4 points, 6.0 assists, 5.4 boards and 3.8 steals and just put 23, 10 and seven on Virginia.

8. BONZIE COLSON, Notre Dame: Colson’s Notre Dame team took a couple of hits in the last month, but he’s still putting up impressive numbers and is an improved defensive presence. Now if he can only find a way to start making threes at a better clip again.

9. JORDAN MURPHY, Minnesota: Murphy fell this week and will continue to drop in these rankings for the same reason that I had a hard time putting Trae Young at No. 1 before this week. Minnesota needs to stop losing games.

10. LUKE MAYE, North Carolina: Maye makes his way back into these rankings. He’s averaging 19.9 points and 10.5 boards for the Tar Heels this season, but he really struggled against Michigan State. I need to see Maye play more teams of that ilk before fully buying in.