Thanksgiving dinner, on the road, at the team hotel, wasn’t going to cut it for Toledo junior big man Taylor Adway.

Like many players away from their families during the holidays, Adway wanted a home-cooked meal. As the unofficial chef of the Rockets, Adway hatched a plan with Toledo head coach Tod Kowalczyk: he wanted to cook Thanksgiving dinner for the entire men’s basketball program before they departed for a mid-week road trip.

Cooking for 15 players, team managers and five coaches and their families seemed like a daunting Thanksgiving feast for even the most seasoned chef.

Facing four days of cooking for over 30 people, Adway’s roommate, Deshaun Cole, a manager at Toledo, even offered the idea of a pair of HoneyBaked Hams to alleviate some of the burden. Adway shunned his roommate’s last-ditch offer for fresh-and-ready ham. The HoneyBaked Ham was the easy way out.

“I’m, like, no I want to cook these hams. When people eat it, I want them to know that it’s good and that Taylor made it. ‘That ham was good.’ Cooking relieves stress. I get joy from cooking. That’s why I didn’t want to buy nothing already made. I wanted to make everything,” Adway said to NBCSports.com.

After four days of hard labor in the kitchen, Adway put together an unbelievable spread for his coaches and teammates — all of it from scratch — including the first turkey he ever made completely on his own. The meal included:

“A lot of the times, the guys will throw in five bucks and he’ll go and do a variety of different meals and just cook for the whole team,” Kowalczyk said of Adway. “And he just does that on his own at the spur of the moment without coaches asking him to do anything. He just loves to do it. And he’s really, really good at it. Really good at it. The meal that we had last night was amazing.” 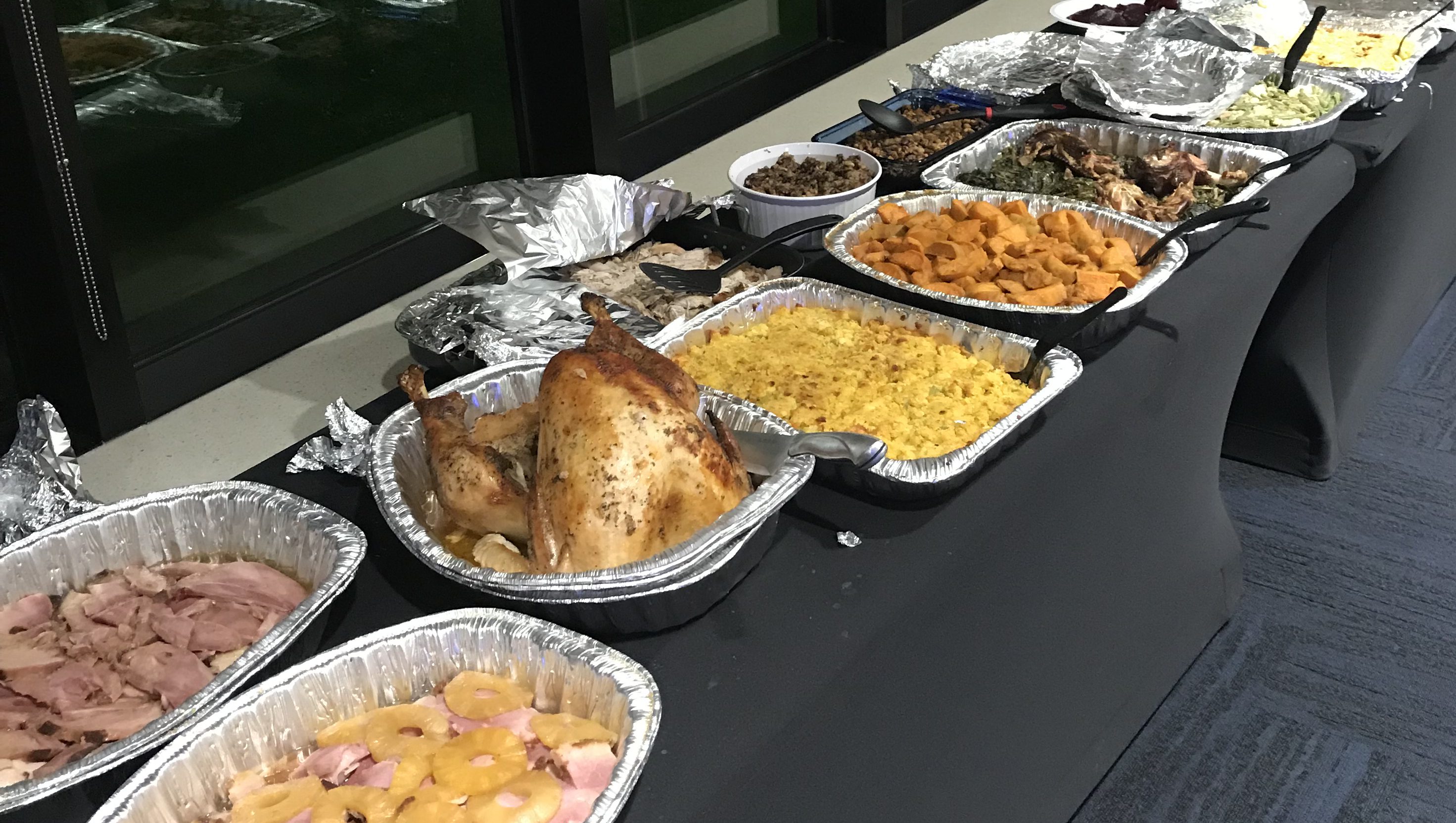 Toledo’s players did a smaller-scale Thanksgiving on their own last year where they collected money before Adway cooked. For this year’s feast, Adway thought it would be smart to include the whole program. Not only would the meal bring more people together, it would be considered a “team meal.” The school and coaching staff could help pay for the groceries without NCAA interference.

Going grocery shopping last Wednesday with Director of Operations Justin Ingram, Adway started preparing the feast last Thursday, finishing everything up by Sunday morning. While Adway prepared everything in his kitchen, he called home to speak with his dad, Tony, for advice on handling things. Taylor learned his way around the kitchen from as young as seven years old thanks to his father’s love of cooking and grilling.

“He’s my foundation when it comes to cooking. Now that I’m older and I have my own place with my own kitchen and my own groceries, I try to do things my way. But everything kind of stems back to everything he taught me,” Adway said of his father. “When I was cooking Thanksgiving, I was constantly calling him, asking for advice. I just try to add my own spin to things. I want it to come off as Taylor’s recipe.”

Tony is so good with family recipes that he can often taste minor differences from his cooking and Taylor’s. Sometimes Tony will even point out specific ingredients his son might have used to alter the recipe. Family is a big reason why Taylor has grown comfortable making food. Adway comes from a big family that regularly spends holidays at his Great Aunt Esther’s, as everyone gathers together to eat, play games, laugh and watch football.

When his basketball career is complete, Adway wants to get into coaching, with the hope that he can also open his own restaurant. That means high school coaching is likely more feasible for achieving both goals since it involves less travel.

“I want to continue to play basketball after college, make money, and then save up and open up a restaurant called Triple T’s. Tony, which is my dad. Tyler, which is my brother. And, Tarmika, which is my mother,” Adway said.

“I get joy from making big meals and making new things. Big meals, usually I’m cooking for a lot of people. I just like cooking for people and they’re enjoying my food. And new things, like making stuff that I never made before, and it winds up being good. My confidence with cooking just gets higher and higher.”

Adway doesn’t adhere to traditional methods when it comes to cooking. While he watched Emeril Lagasse growing up, and still enjoys celebrity chefs like Bobby Flay and Guy Fieri, Adway often sees a video of a recipe and stores it away to try at another moment. Scrolling on Instagram or Facebook will lead Adway to videos of things he wants to cook. One time, Adway took white rice with broccoli, chicken and steak and cooked it inside of a carved-out pineapple. Adway has also made everything from homemade french toast to lasagna and is an expert handling a grill. During the summer on campus, Adway sent group messages to teammates, asking what they wanted to eat. After receiving responses, Adway collected the money he needed for groceries and cooked for his teammates before gatherings.

“I know he’s really good with ribs and chicken on the grill. He’s fantastic on the barbeque,” Kowalczyk said. “He’s great in the kitchen but I think his passion is probably more on the grill side of it. He learned that all from his dad.”

Kowalczyk did assist Adway with some of the Thanksgiving spread for Toledo last weekend, challenging him to see who could make a better turkey and dressing. It was the only assistance that Adway had for the general meal, which also included a dessert table.

“To make it fun, we made it a little bit competitive. We had a turkey contest between myself and him — as well as stuffing. He did everything, I just did turkey and stuffing. His stuff was a lot better than mine. And I think I’m pretty good at it,” Kowalczyk said.

“He didn’t want to give it to me for the stuffing, but I asked my teammates, and everybody was saying mine was better. So, I got him on the cook-off this time,” Adway said.

Although leftovers are one of the best parts of Thanksgiving, the team knew they’d be gone for the next five-to-six days.

While Adway and Cole might not have agreed on the preparation of the ham, the roommates were united in deciding to donate the leftovers to a homeless shelter.

They delivered their Thanksgiving food to the St. Paul Community Church on Monday evening.