More on the scandal 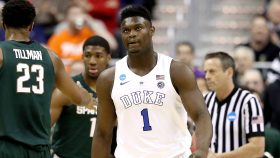 On Tuesday evening, roughly ten hours after his program was referenced in an FBI complaint that resulted in the arrest of four assistant coaches, two Adidas executives, an employee for an agent, an AAU coach and a financial advisor, Pitino released a statement saying that “these allegations came as a complete shock to me” and “I am committed to taking whatever steps are needed to ensure that those responsible are held accountable.”

Those were the last words that he would utter as an employed basketball coach.

Pitino was placed on administrative leave and “effectively fired” on Wednesday morning, his lawyer told the Louisville Courier-Journal, the fallout from a pair of scandals too much for one of the most powerful men in the sport to endure. His boss, athletic director Tom Jurich, was expected to receive the same fate, according to multiple reports.

A press conference with interim Louisville President Greg Postel will be held at 1 p.m. Pitino and Jurich will not be there. An official announcement is expected at that time.

A Hall of Famer that has been in charge of the Louisville program for 16 seasons, Pitino’s demise came as a direct result of a bombshell investigation report released by the U.S. Attorney in the Southern District of New York. Four assistant coaches and six influencers in the college basketball world were arrested, and while none of them were members of the Louisville staff, the program still managed to find a way into the mess.

Jim Gatto, a powerful Adidas executive, was one of the men that was arrested, in part because of a scheme that was devised to funnel $100,000 from Adidas to the family of a player that can easily be identified as Brian Bowen. That payment was made “at the request of at least one coach from [Louisville],” and another Louisville assistant was recorded as part of a conversation in which a Class of 2019 prospect was paid to commit to the Cardinals. During that conversation, per the release from the FBI, it was made clear: Louisville “was already on probation with the NCAA” and that “they would have to be particularly careful with how they passed money” to the player.

Why was Louisville on probation with the NCAA?

Because from 2010-14, a member of Pitino’s coaching staff, Andre McGee, was caught paying for strippers and sex workers for underage recruits and members of the Louisville team. The NCAA investigation into those allegations resulted in not only probation for the Louisville program, but, pending appeal, the vacation of Louisville’s 2012 trip to the Final Four and their 2013 National Title.

That came on the heels of an incident in 2010 where Karen Sypher, a woman who received a seven-year prison sentence for trying to extort Pitino over an affair the two had.

But this scandal is different.

With Sypher, Pitino strayed outside of his marriage. I’m not condoning that, but his personal life is his personal life, and in the end he was the victim of an extortion scheme, even if, as the ‘victim’, he was thoroughly humiliated in the eye of the public.

Pitino has told anyone and everyone that he was completely in the dark regarding sex-for-pay scandal that the NCAA ruled on earlier this year. I believe him. Even after the results of the FBI’s investigation were made public, I believe him. His deniability in that case is entirely plausible, and while it shouldn’t shield him from NCAA punishment – the rules are the rules – in my mind, he got a pass for that. He’s too smart to do what McGee did.

But the salacious details of his personal life and the outright, blatant, institutional level of cheating that came to the forefront on Tuesday are two different things.

Here’s the truth: The reason that the NCAA changed their policy on head coach plausible deniability is precisely because of what Louisville did in that Las Vegas hotel room. Members of Pitino’s coaching staff facilitated a six-figure payment to at least one recruit through a shoe company. Pitino was not attached to it; the boss doesn’t get involved with the street-level dealings. No head coaches do, even if they implicitly or tacitly endorse it.

This is the dirty part of college basketball the NCAA has been trying to rid the game of.

And that’s sad to me.

Pitino is one of the best to ever do it in the college basketball ranks. Hell, he may be the best coach of this generation. I don’t think that’s overstating it.

He’s won two national titles, one with Kentucky and one with Louisville. He’s won 770 games. He’s been to seven Final Fours. He may be the most important and divisive figure in the state that loves college basketball more than any other. He made Kentucky great again after a scandal in the late-80s involving then-Kentucky coach Eddie Sutton that left the program with two years worth of postseason bans. He made Louisville great again after the forgettable end of Denny Crum’s tenure, a four-year stretch where the Cardinals failed to win 20 games in a season.

And his career will be remembered as nothing more than an incident on a restaurant table, hookers in a dorm and the money paid to a player in a Vegas hotel room.

He’s not retiring. He’s being to be forced out of the game that he meant so much to, a pariah at both of the programs that he made relevant, that he took from the doldrums and led to a national title.

And that’s a shame.