The JellyFam movement started as nothing more than a way for a little New York City point guard to add some flair to his game, a way to stunt on an opponent when you can’t dunk on that opponent, and has grown into something no one, not even Isaiah Washington, could have imagined.

Washington is that little point guard, and a few years ago, he and a couple of his hooping buddies coined the jelly, which, at its root, is essentially nothing more than a finger roll. Where the magic happens is when that finger comes after weaving around an opponent or finishing the layup despite the presence of a shot-blocker at the rim, with a sprinkle of NYC Point God showmanship. Think Kyrie Irving’s layup package if they happened at Rucker Park with an And1 Mixtape crew filming the game:

What JellyFam has turned into is a full-blown, grassroots movement powered by social media.

And while Washington is the face of the movement, it’s not just him. A half-dozen other talented New York hoopers are members of JellyFam, but Washington is the star. He’s a celebrity on the city’s hoops scene, drawing massive crowds wherever he goes and garnering more than 335,000 followers on Instagram despite having just 27 posts on the site. It’s not as if Washington is a sure-fire NBA All-Star, either. He’s a 6-foot-1, 160 pound point guard that doesn’t crack the top 50 on any of the major recruiting services and is headed to Minnesota to play his college ball.

His popularity is tied directly to the movement that he created.

It’s a shame, however, that he cannot profit off of it, not if he wants to remain an amateur that is eligible to play college basketball.

That doesn’t stop corporations from profiting off of what he has created.

Today, Nike released a new colorway for the kid size PG1s, Paul George’s signature shoe, that has been dubbed the ‘JellyFam PG1’. It’s being sold for $90 on their website right now. This is what it looks like: 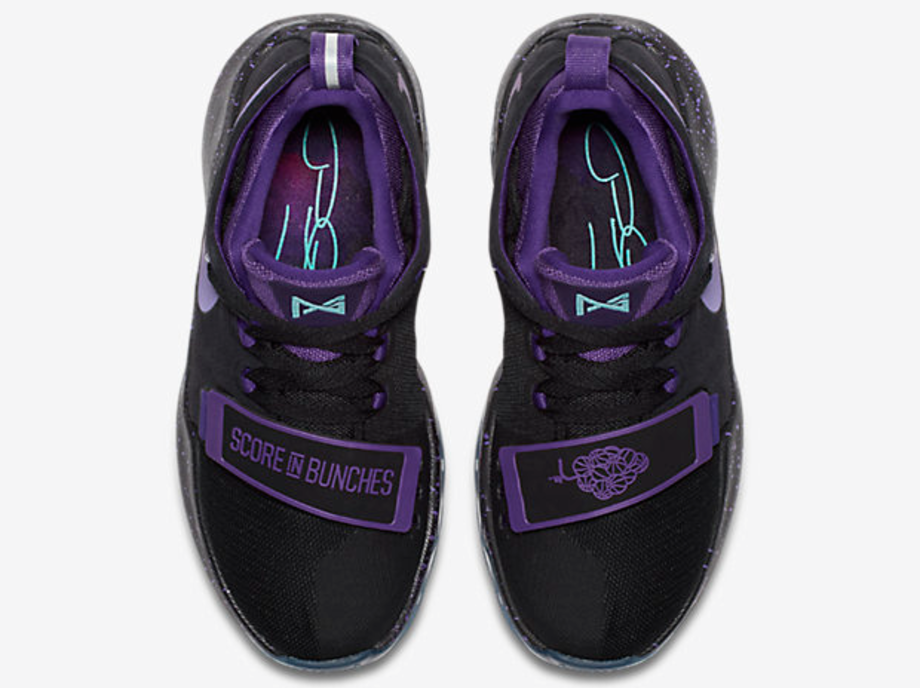 What you’ll notice, in addition to purple and turquoise colors that are a staple in the JellyFam gear that Washington wears, is the straps. On the right foot, it says “score in bunches”. On the left foot, you’ll see a design that looks like basketballs on a grapevine … or the grape emoji, with basketballs instead of grapes.

Washington and the rest of the members of JellyFam have adopted the grape emoji as their own when posting on social media.

According to a Nike spokesperson, these shoes were “inspired by Paul George’s love for fresh grapes.”

What Nike is doing here is wrong.

They are trying to capitalize on a movement created by athletes that are not allowed to monetize something they built simply because of the NCAA’s amateurism rules. They are stealing the work created by these young men simply because they can. At worst, this is plagiarism.

Washington did not respond to messages from NBC Sports, but on Friday morning he tweeted, “It’s crazy bro they know I can’t so they just take advantage.” That tweet has since been deleted.

If you read this space, you know my feelings on the NCAA and amateurism. It’s wrong and it needs to be changed, but that’s another column for another day that’s been written thousands of times.

This column is much simpler: An international, multibillion-dollar company like Nike is already profiting off of the unpaid labor of amateur athletes.

Stealing their art, their work, their movement to try and sell sneakers to kids for $90 is despicable.

And I’m not sure there’s anything else to add.