The bracket of the 2017 Puerto Rico Tip off was revealed Wednesday, setting up a showdown between a 2016 Final Four participant and the 2016 Big 12 tournament champion.

South Carolina and Iowa State headline the event, which will be played Nov. 16-19, in Fajardo, Puerto Rico.

The Gamecocks are on the top half of the bracket, opening against Illinois State while the Cyclones are on the bottom half, squaring off against Appalachian State.

Boise State vs. UTEP is the other top-half quarterfinal while Tulsa vs. Western Michigan is the other.

The championship game of the Puerto Rico Tip Off on Sunday, Nov. 19. 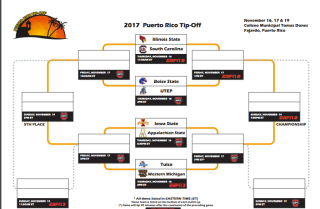