GLENDALE, Ariz. — Joel Berry II’s parents didn’t like the tattoo, not at first.

On Monday night — a night they spent watching their son score 22 points and dish out six assists, a night where Berry’s steadfast belief in himself, in his teammates, paid off with a national title win over Gonzaga — they both had that same tattoo in the same spot on their arm.

The Berry family motto is ‘Believe’. Has been as long as Joel II can remember. “Believe in what you want,” Kathie, Joel’s mother, said. “Believe you can win. That’s just what we live.” It’s what Joel II has lived, too, never more so than in the 364 days since his dream was snatched from his fingers in the 4.7 seconds it took Ryan Arcidiacono to find Kris Jenkins for that game-winning, title-snatching three.

It would have been easy for Joel II to give up, to assume that his one shot at hanging a banner in the Dean Dome was gone. That’s why he got the word tattooed on the inside of his left bicep right before the start of this season.

“It’s something that I want to be able to down and see, no matter what,” Joel II said. “Look, I’m not a big fan of tattoos. If I get a tattoo, I want it to mean something to me. This right here has got me throughout this whole season. To be here right now, it’s just all because of believing in myself and believing in my teammates, believing in what the coaches want us to do.”

“That word. It just means so much.”

His parents knew that, which is why they, along with Berry’s four brothers and sisters, inked up the inside of their left bicep with an identical, removable tattoo for Monday’s game. They just had to find a way to show it to him.

“My mom has been doing that whistle since I was five years old,” Berry said. “Sometimes that whistle is because I’m in trouble, and sometimes it’s because she’s trying to get our attention. I can hear it from anywhere.”

On Monday night, he heard it right before the start of the game. When he turned around, the entire Berry clan was flexing their arm, pointing to their left bicep.

“It almost made me cry right then.” 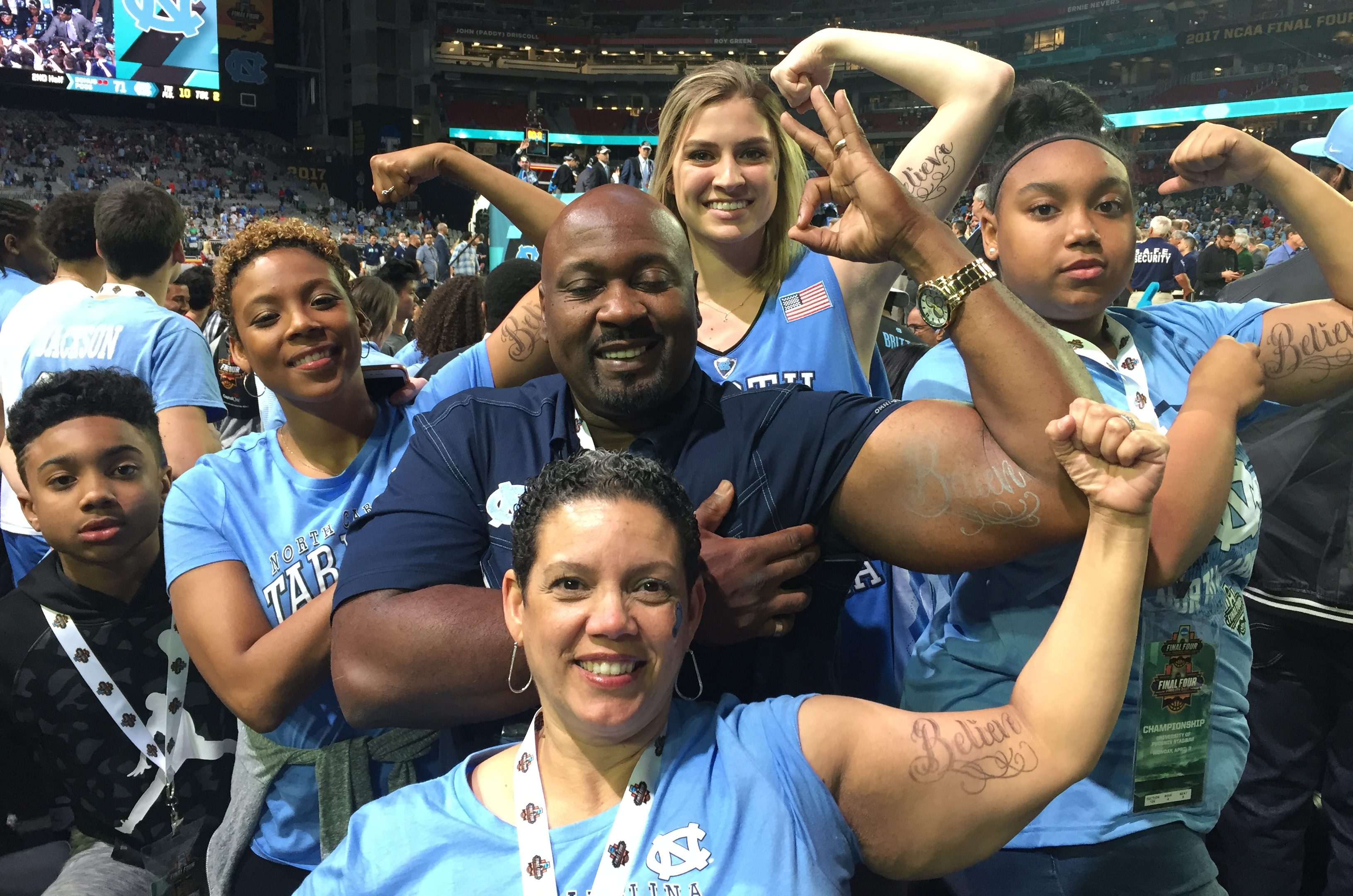 That wasn’t the only time that Berry cried on the University of Phoenix Stadium floor.

And emotionally, he couldn’t handle it.

“I was about to cry at the free throw line,” Berry said. “It was just a relief. I couldn’t believe it. I told the ref, ‘sir, i need a timeout,’ and I went to the sideline. ‘Look, I needed that, I’m about to lose it.’ Coach was like, ‘don’t lose it yet. Just knock these free throws in, then we can celebrate.’ And I went up there and I missed the first one.”

“I knocked in the second one and I was running down the court and I was crying.”

He wasn’t alone. Theo Pinson was crying before the final buzzer sounded. Isaiah Hicks copped to having to struggle to hold back tears. Justin Jackson didn’t bother holding them back. “Tears of joy started falling and I couldn’t control it,” he said.

This moment was cathartic for the Tar Heels. A year ago, at this same time, they were the ones left in tears following one of the most memorable plays in basketball history, a title-winning, buzzer-beating three from Kris Jenkins. After that shot went down, Williams said, “the feeling of inadequacy in the locker room last year is the worst feeling I’ve ever had.”

That is what North Carolina has been carrying with them all season long. It’s part of the reason Berry got that tattoo on his arm. It’s why the team’s group text has been named ‘Redemption’. It’s why the screen-saver on Pinson’s phone is a picture of him immediately after last year’s title game loss. It’s all hokey and cliché and narrative-driven, and it’s all too painfully accurate. Williams told his team that they had a chance to do this at the team’s first meeting back in August, that this was a group that had the pieces on their roster to avenge last year’s loss, to allow them to experience what it was like to be in a title-winning locker room.

But that didn’t always help.

“Every time I tried to think about us winning it I thought about the outcome of last year,” Nate Britt II said.

The other subplot of the Tar Heel season is the looming investigation that is being held over the head of the university. We’re approaching a two years since North Carolina first received a Notice of Allegations for violations committed in a wide-reaching academic scandal that has forever tarnished the sterling reputation of North Carolina. Not the basketball program, the school.

I understand why it would be hard for a neutral to be happy for North Carolina. Not only is there the skepticism that the NCAA would ever actually hammer one of their flagship programs, but UNC also has the money to fund an elite legal defense team that will make every effort to ensure that this is the most difficult investigation the NCAA will ever do.

I can’t blame anyone for that.

But understand, the scandal at North Carolina, the one that has muddied Williams’ name and could eventually result in a national title banner coming down, had nothing to do with any of the players on the floor tonight. They didn’t reap the benefits of any fake classes. Most of them came to North Carolina despite the fact that this investigation is ongoing.

It’s debatable — and probably inaccurate — to say that Williams did nothing wrong, but it’s 100 percent correct to say as much about the players. Their life in the public eye has been made that much more annoying by the fact that they have to answer questions about it. More importantly, they’re the ones that took last year’s loss, and the ones that will celebrate this year’s win, the hardest.

“After the Oregon game,” Berry recalled of a conversation he had with home roommate on the road, Pinson, “we had just talked about we get another shot at this, and we’re not going to let it get away from us.”

“Even if i have to steal that trophy from Gonzaga,” Pinson said back, “I’m not leaving that gym without the trophy.”

“We made that dream come true. I can forget about that shot from last year,” Berry said. “When we wake up in the morning it’s going to be us on the front of the newspaper.”

All it took was a title to get over last year’s heart break.

Things are going to be different in the Britt household from now on.

“I’ve got balance in my house now,” Nate Sr. said.

And this time, it was Nate II that made Jenkins’ eyes water.

“I didn’t cry last year,” Jenkins said, moments after getting a bear hug from Ramses, the North Carolina mascot, while wearing a Nate Britt t-shirt jersey.

“I cried a little bit tonight.”