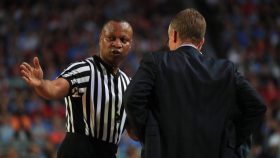 The first round of the NCAA tournament was … well, it was a dud.

There’s not really any way around it. The most exciting moments were missed shots and intentional fouls that went off the rails.

The upsets? A No. 12 seed, Middle Tennessee State, that was favored won. So did a No. 10 seed, Wichita State. Of the three No. 11 seeds that won, one was favored (Rhode Island), one was a two-point dog that everyone was on (Xavier) and the third is the one real “cinderella” of this year’s dance: USC, the fourth-best team in the Pac-12 this season.

First round chalk makes for mouth-watering second round matchups. Remember, if you can stream every game at NCAA.com.

GAMES OF THE DAY

12:10, CBS, No. 4 West Virginia (-2.5) vs. No. 5 Notre Dame: The first of three fascinating games between teams with contrasting styles features Press Virginia against the program that came up with the Burn Offense. Notre Dame doesn’t drag things out the way they did a few years ago, but they still rely heavily on ball-screens and three-point shooters. How Matt Farrell handles West Virginia’s pressure will determine this game.

8:40, TNT: No. 4 Florida (-2) vs. No. 5 Virginia: Once again, we have a game featuring a team stocked with athletes that loves to press and force turnovers facing off with a team led by a star point guard that wants to control tempo. It will be interesting to see how Virginia lines up. They played five guards at times against UNC Wilmington and may not have Isaiah Wilkins.

9:40, TBS: No. 4 Purdue vs. No. 5 Iowa State: Iowa State was in some serious trouble this season until they moved freshman Solomon Young into the starting lineup. Purdue has the biggest front line in the country, but they’re going to have trouble matching up with Iowa State’s back court.

THE CONTENDERS IN ACTION

2:40, CBS: No. 1 Villanova (-6) vs. No. 8 Wisconsin: The Badgers were one of the under-seeded teams when the bracket was released, and there were quite a few people that thought they would have a shot to pick off Villanova in this game. The Wildcats don’t have much size, and the Badgers run so much of their offense through Ethan Happ and Nigel Hayes in the post.

5:15, CBS, No. 1 Gonzaga (-11) vs. No. 8 Northwestern: Northwestern seems to be the team of destiny in this event, playing in their first-ever NCAA tournament and winning games when opponents foul when they’re up by one point. It would be fitting if Gonzaga saw Mark Few’s best team get picked off by the Wildcats.

7:45, CBS: No. 2 Arizona (-5) vs. No. 7 Saint Mary’s: Saint Mary’s is 29-1 on the season against teams not named Gonzaga. They’re 0-3 against the Zags. This will be a chance for them to show just how good they are against the Pac-12 regular season co-champion and tournament champ.

WILL THE SLIPPER STILL FIT?

6:10, TNT, No. 3 Florida State (-6.5) vs. No. 11 Xavier: The Musketeers are one of the best programs in the Big East. They’re no Cinderella, but that program has had their most success in a situation when they’re the underdog. They are here.

7:10, TBS, No. 4 Butler (-3.5) vs. No. 12 Middle Tennessee: The Blue Raiders aren’t actually favored against the Bulldogs, but I do think that Kermit Davis actually has a more talented team than Butler.