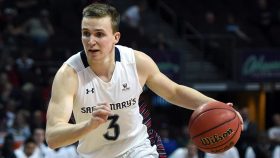 Beginning in September and running up through November 11th, the first day of the regular season, College Basketball Talk will be unveiling the 2016-2017 NBCSports.com college hoops preview package.

Today, we are previewing the Patriot League conference.

The Patriot League has been unpredictable.

Case in point: Holy Cross winning four straight road games to win the automatic bid into the NCAA Tournament. The Crusaders, who capped the regular season with an 83-68 drumming from Boston University, had five total league wins all season.

A year earlier, Lafayette finished 9-9 in conference play before going on a run that ended in the field of 68. Before that, American, pegged to finish ninth in the preseason poll, won the league in 2014.

Lehigh, the clear-cut favorite again this season, looks to end the 2016-17 season where it will begin: atop the conference. Led by Tim Kempton, the two-time Patriot League Player of the Year, and Kahron Ross, another all-Patriot League performer, the Mountain Hawks have great balance. The 6-foot-10 Kempton is a presence on both ends of the floor, while Ross, Austin Price and Kyle Leufroy all shot the ball well from beyond the arc. That should help offset the departure of Jesse Chuku. The backcourt is bolstered by the return of Brandon Allston, who missed all of last season with a torn ACL. Lehigh has the best big man in the conference and one of the best set of guards.

The title of best perimeter in the Patriot League should go to Boston University. The Terriers return Eric Fanning, a first team all-league guard in 2015-16, welcome back Cedric Hankerson, who appeared in only one game last season while recovering from a torn ACL, and return Cheddi Mosley and Kyle Foreman. This depth allows BU to play in a variety of ways. Losing John Papale hurts, but Joe Jones has a core guards who will accept roles and know what it takes to win games.

Holy Cross, a year after winning an NCAA Tournament game (defeating Southern, 59-55, in the First Four) with a losing record, should finish near the top of the conference standings this season. The Crusaders return three double-digit scorers in Robert Champion, Malachi Alexander and Karl Charles. What fueled Holy Cross’ postseason run was a 1-3-1 defensive that was implemented during the season and got better with time. Per kenpom.com, the Crusaders were among the worst in the league in defensive efficiency. That shouldn’t be the case this season. On offense, they should continue their methodical pace led by senior point guard Anthony Thompson. The 5-foot-11 point guard will have no shortage of 3-point options when the shot clock winds down.

It’s hard to label Bucknell as a sleeper. The Bison have won the regular season title in each of the last two seasons. However, they graduated Chris Hass. Nana Foulland has the chance to not only be the focal point of the offense, but emerge as one of the league’s best players. The 6-foot-9 forward has started both years he’s been on campus and has made an impact on both ends of the floor. Stephen Brown is the other returning starter for Nathan Davis. Like Foulland, it’s reasonable to believe that Brown can make the jump in a leading role this season. If that’s the case, then Bucknell should contend once again.

The freshmen and sophomores outnumber the upperclassmen, but Navy should be in the mix this winter. The Midshipmen return leading scorer Shawn Anderson, who posted 13.2 points per game last season. Some of the underclassmen will need to step up after Navy graduated key pieces in the backcourt and the frontline. American started out conference play 0-6, but closed out the season winning nine of its last 12 to finish in the top half of the league with a 9-9 record. Bringing back reigning Patriot League Rookie of the Year, Delante Jones, only adds to the optimism for the Eagles entering this season. Colgate graduated Austin Tillotson, but Jordan Swopshire is more than capable of being a breakout star in the Patriot League this season. The Raiders also return Tom Rivard, who also scored in double figures last season. In an unpredictable league, mark down Colgate as a sleeper.

Andre Walker and Jarred Jones both averaged more than 13 points per game last season for Loyola. Part of a trio of returning starters, the Greyhounds could surprise some this year. Lafayette took its bumps last season en route to a last-place finish. Nick Linder, a senior point guard who averaged 13.3 points per game, will anchor a team whose roster is still dominated by freshmen and sophomores. Army lost all five starters, including two of the league’s top scorers in Tanner Plomb and Kyle Wilson, from a season ago, and saw head coach Zack Spiker leave to fill the Drexel vacancy. New head coach Jimmy Allen has some talented underclassmen, but they should be expected to go through growing pains this season.

Tim Kempton, the two-time reigning Patriot League Player of the Year, is the runaway favorite for this year’s honors. The 6-foot-10 center averaged 17.7 points, 9.5 rebounds and 1.4 assists per game as a junior. The presence Kempton commands on the block helped the Mountain Hawks lead the Patriot League in 3-point percentage at 39 percent last season.