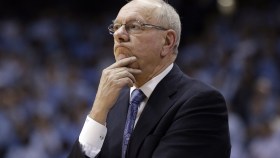 Beginning in September and running up through November 11th, the first day of the regular season, College Basketball Talk will be unveiling the 2016-2017 NBCSports.com college hoops preview package.

Today, we are previewing the Big West Conference.

Hawaii landed the Big West an NCAA Tournament win back in March when the Rainbow Warriors knocked off short-staffed Cal in the first round. Hawaii’s run ended two days later with a 73-60 loss to Maryland. The Rainbow Warriors are facing NCAA sanctions, which resulted in key pieces like Stefan Jankovic to declare for the NBA Draft, and potential returnees like Stefan Jovanovic – yup, that’s a different person – and Isaac Fleming transferring. Hawaii needs to replace the entire starting five, which likely means a new team will top the Big West standings in 2016-17.

Long Beach State was one win-shy from advancing to its first tournament since 2012. The 49ers should be in good position to end the short drought in 2016-17. Long Beach State has the best backcourt in the league. The 49ers return Justin Bibbins, the conference’s top point guard. They replace the production of conference first-teamer Nick Faust with the addition of transfer Evan Payne, who averaged 18.0 points per game at Loyola Marymount as a sophomore during the 2014-15 season. He rejoins ex-Lion Gabe Levin, who lacked the impact many expected following his transfer, but he is still someone who can be an all-conference forward. In a guard-heavy league, the 49ers have proven, veteran pieces, and the solid frontcourt presence, that makes them the favorites in the Big West.

Mamadou N’Diaye declared for the NBA Draft, but remember, UC Irvine once boasted the biggest starting lineup ever. The Anteaters’ roster includes the aguable best player in Luke Nelson. The 6-foot-3 guard averaged 13.7 points, 3.9 assists and 2.9 rebounds per game. Nelson headlines a perimeter that includes Jaron Martin and Brandon Smith, but the frontline is dominated by 7-foot-2 Iannis Dimakopoulos and Jonathan Galloway. UC Irvine has the best balance in the league, which makes the Anteaters the toughest competition for the 49ers.

UC Santa Barbara has been a familiar name atop the Big West standings. The Gauchos should content for the top spot behind Gabe Vincent, the 6-foot-3 swingman who averaged 14.1 points per game and shot better than 41 percent from three this past season. He’ll be joined in the backcourt by Eric Childress, a senior who has established himself as a three-point threat.

In a guard-happy league CSUN bolsters the top frontline. Outside of Kendall Smith, a 6-foot-3 guard who averaged 15.3 points per game, the Matadors add transfers Rakim Lubin and Dylan Johnson. The duo should help replace the team’s top rebounders. CSUN returns its top five scorers from a season ago, making the Matadors a trendy pick for sleeper in the Big West.

Cal-State Fullerton will have no shortage of perimeter options. Tre’ Coggins, the Air Force transfer, will be one of the top scorers in the league again this season. Khalid Ahmad also scored in double figures a season ago. But the Titans need to see solid performance from point guard Lionheart Leslie. Darius Graham and Arell Hennings lead a backcourt for UC Davis, but like the majority of the conference, the frontline serves as a question. J.T. Adenrele, who will anchor the frontcourt, will be the name to watch for the Aggies.

Without Jaylen Bland and Taylor Johns, defenses will focus on Secean Johnson for UC Riverside. The 6-foot-3 swingman, who averaged 12.0 points, 5.8 rebounds and 2.0 assists per game in 2015-16, could be a breakout player in the conference. However, the development of Alex Larsson and Menno Dijkstra could determine where the Highlanders are contenders or not.

Cal Poly has to replace four of its top five scorers, while Hawaii is depending on a host of newcomers to remain competitive during a season of NCAA sanctions.

The lone returning member of the all-Big West all first team, Nelson averaged 13.7 points, 2.9 rebounds, 3.9 assists and  1.3 steals per game for the Anteaters during the 2015-16 season. The 6-foot-3 guard scored in double figures 28 times during his junior season.

THE REST OF THE PRESEASON BIG WEST TEAM: