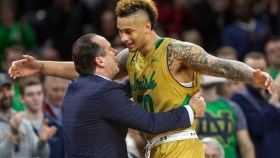 2016 NCAA Tournament Preview: The big men that will win you your bracket

2016 NCAA Tournament Preview: The guards that will win you your bracket

2016 NCAA Tournament: Which top seeds are on Upset Watch?

By this point in the season you know the stars in college basketball, be it Oklahoma’s Buddy Hield, Michigan State’s Denzel Valentine or another marquee player who’s been in the highlights on a nightly basis. But even with stars doing the heavy lifting, there will be games in which the contributions of a non-star are needed to ensure victory.

Below are ten players capable of stepping forward and being “unsung heroes” for their teams during the NCAA tournament.

Derek Willis, Kentucky: Willis is fifth on the team in scoring, as he’s averaging 8.0 points per game. But his improved play is one of the reasons for the Wildcats’ late-season resurgence that resulted in a share of the SEC regular season title and an SEC tournament crown. At 6-foot-9 he’s capable of stepping out beyond the three-point line, giving the Wildcats valuable spacing on the offensive end of the floor. That will be key as they look to get to Houston.

Kris Jenkins, Villanova: During last season it was Josh Hart who stepped out of the shadows for the Wildcats. This season Jenkins has been that guy, as he’s now second on the team in scoring with an average of 13.3 points per contest. Like Willis, Jenkins can hit shots from beyond the arc and that opens up driving lanes for one of the best two-point shooting teams in the country. Jenkins’ scoring ability is key, but when he rebounds at a solid clip the Wildcats get even better defensively.

Eron Harris, Michigan State: The West Virginia transfer was pegged as an impact addition before the season began, but while he’s certainly contributed to one of the best teams in America he has the skill to do more than he has. With Denzel Valentine’s versatility and Bryn Forbes’ shooting ability, those two will draw a lot of attention from opponents. That could open some things up for Harris, who’s averaging 9.3 points per game and shooting 42.7 percent from the field and from three.

Landen Lucas, Kansas: Lucas isn’t much of scorer, and he doesn’t have to be given the options at Bill Self’s disposal. But his abilities as a rebounder and defender are what allowed Kansas to take off once he was placed in the starting lineup for good. Kansas has won 14 of its last 15 games and are a favorite to cut down the nets in Houston. And if Lucas can continue to contribute as he has, the Jayhawks have a good shot of reaching those expectations.

Mike Tobey, Virginia: Tobey’s an interesting cog for the Cavaliers. He struggled early in the season on both ends of the floor, with the graduation of Darion Atkins proving to have a greater impact on Tony Bennett’s team than some may have expected. The senior big man has been inconsistent, but he’s capable of having an impact as evidenced by his 15-point, 20 rebound performance in Virginia’s win over Louisville in the regular season finale. At some point Malcolm Brogdon, Anthony Gill and London Perrantes will need someone else to step forward. Can Tobey be that guy?

Jabari Bird, California: The former McDonald’s All-American didn’t really get going this season until he returned to the starting lineup with Jordan Mathews moving into the sixth man role. At 10.4 points per game he’s Cal’s fifth-leading scorer, and with shooting percentages of 46.1 percent from the field and 40.9 percent from three, Bird is definitely capable of making shots. He’s the kind of scorer who can get hot and left his team to a win, something Cal may need as the look to navigate the top half of the South bracket.

O.G. Anunoby, Indiana: Yogi Ferrell is Indiana’s most valuable player and Troy Williams may be their most important option, as the Hoosiers are at their best when he’s fully engaged. And as the season’s worn on Anunoby, a freshman who didn’t play all that much during non-conference play, has developed into an important piece for Tom Crean’s team. They don’t need him to score much, but Anunoby’s activity and willingness to defend has helped make Indiana a better team.

J.P. Macura, Xavier: The Big East Sixth Man of the Year combines with James Farr to lead one of the better benches in the country. Macura can score both inside and outside of the arc, and defensively he’s a pest. When the Musketeers go to their 1-3-1 zone Macura’s usually at the top of it, and while the zone hasn’t been as good as it was last season it’s an alignment that can still cause some trouble. As for Macura, his ability to be a spark off the bench will be big for Xavier in the tournament.

Dwayne Benjamin, Oregon: Benjamin is one of many Ducks who can fill multiple roles, thus making a seven-man rotation just a little deeper that one would anticipate. Averaging eight points per game off the bench, Benjamin’s capable of contributing double figures on any given night. They didn’t need him in their Pac-12 tournament final whipping of Utah, but Benjamin came up big with 12 points and nine boards in the Ducks’ overtime win over Arizona in the semis.

Khadeem Lattin, Oklahoma: Ryan Spangler has once again been the stalwart in the front court for the Sooners, who have rated amongst the best teams in the country all season long. But if Oklahoma is to get to the Final Four they’ll need consistent contributions from Lattin, who’s a Houston native. With Buddy Hield, Isaiah Cousins, Jordan Woodard and Spangler handling the scoring Lon Kruger won’t need much in that area from Lattin. What he will need is Lattin reaching the 5.5 rebounds and 2.2 blocks he’s averaging on the season consistently.