Kansas is the No. 1 seed in the South Region after winning the Big 12 by two full games and taking home the Big 12 tournament title. The Jayhawks have the best profile of anyone in the country; they had a No. 1 seed locked up weeks ago. No one can complain about the Jayhawks being a top seed, but the Jayhawks may have a gripe about their region.

The South is stacked, with a No. 4 and No. 5 seed with the ability to get to a Final Four, a No. 7 seed that spent much of the season ranked in the top ten and play-in game participants that can both legitimately win three or four games in the tournament. 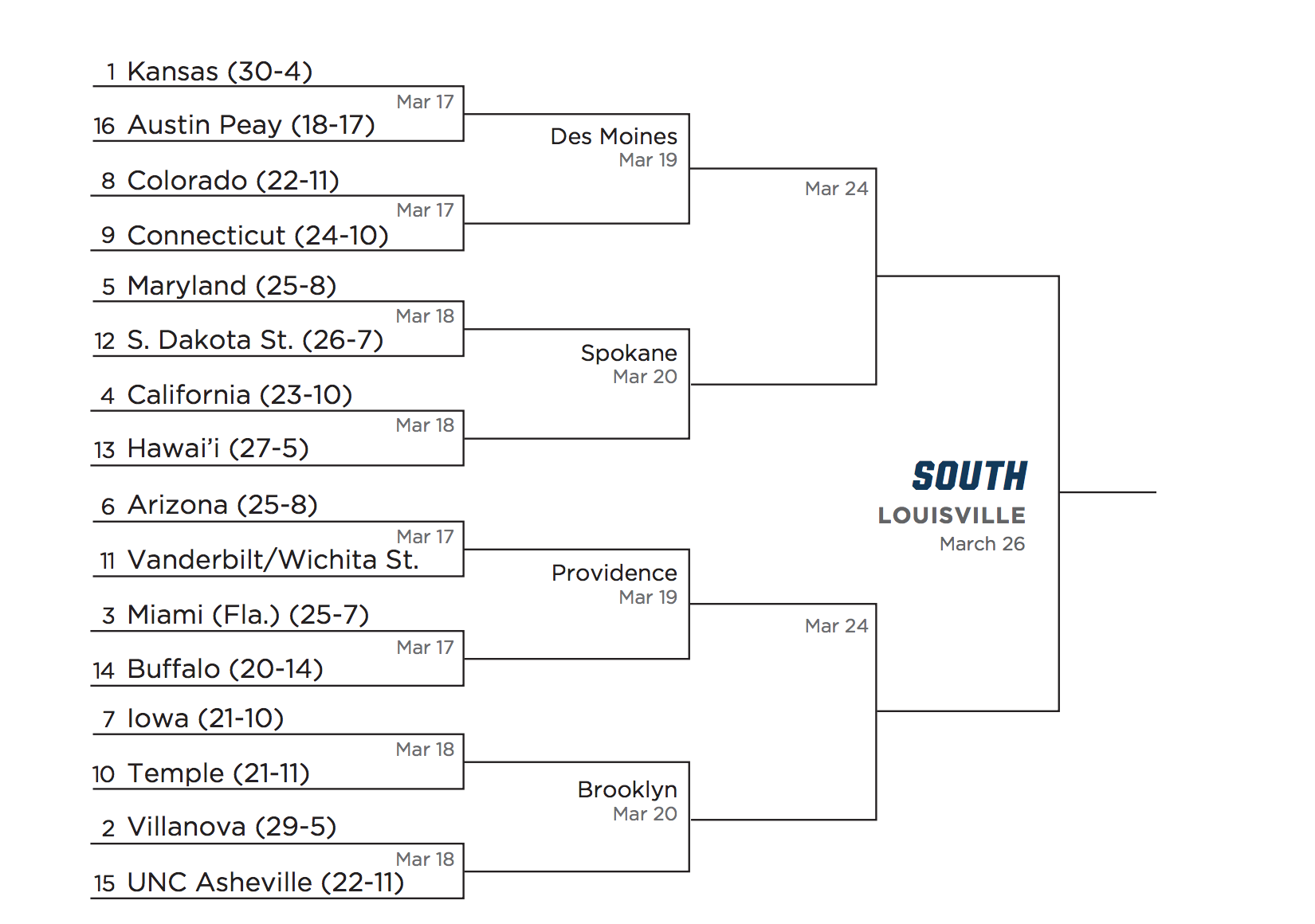 The more that I look at this region, the less intimidating it seems. While the tendency will be there to call it “loaded” or the “bracket of death”, the truth of the matter is that people are only going to say that because the South is chock-full of teams that we thought were going to be good at some point this season — Cal, Maryland, Vandy, Iowa. None of them have proven anything this season beyond being unable to live up to those expectations.

That’s why I have Kansas making it to the Elite 8. I don’t think they get challenged all that much, either. I think I like Miami coming out of the bottom-half of the South, but that’s as tough as any Elite 8 pick to make. Villanova caught a break with some friendly matchups, Arizona has the pieces — and the coach — to win three games, Vandy and Wichita State are dangerous. I’m rolling with the Hurricanes because I love their guard play and they’re a veteran group with a head coach that knows how to get to a Final Four.

I think I predicted both of these teams as Final Four teams at some point during the preseason. Wichita State has done nothing but win during the careers of Fred VanVleet and Ron Baker, and there’s no reason to believe they can’t continue to do that in March, even if it comes as an underdog this season. Vandy, on the other hand, has three future NBA players and a boat-load of knock down shooters. They’re tough to matchup with because of their size and because Wade Baldwin IV can go into takeover-mode. Their issue this season as simply been showing up to play. They don’t always do that.

FEEL LIKE GAMBLING?: Maryland-Cal winner in the Final Four

Maryland was the preseason No. 1 team in the country, according to some. Cal was a preseason top 15 team. Both of them, when they’re playing their best basketball, are legitimate Final Four picks. I just don’t think that we are ever going to see those teams show up. The Terps don’t have enough guards and they can’t find a way to effectively get Robert Carter, Diamond Stone and Jake Layman on the floor at the same time. And what has Cal done away from Haas Pavilion to make you think that they’re going to be able to beat Kansas anywhere but Haas Pavilion?

BEST OPENING ROUND MATCHUP: No. 6 Arizona vs. Wichita State-Vanderbilt

Everything about that game is awesome to be. The First Four battle will be thrilling on Tuesday night, while Arizona is going to get a fight from whoever advances.

CBT PREDICTION: Kansas rolls through the region, and frankly, I think they roll through relatively unchallenged.