The East Region is going to be fascinating, particularly in the top half of the bracket, which features North Carolina, Providence, Indiana and Kentucky. We could very easily get a second round that sees UNC play the Friars and Indiana face those Wildcats, meaning that one of Tom Crean or John Calipari will be headed home the first weekend.

I’m unnecessarily fired up to see that postgame handshake. 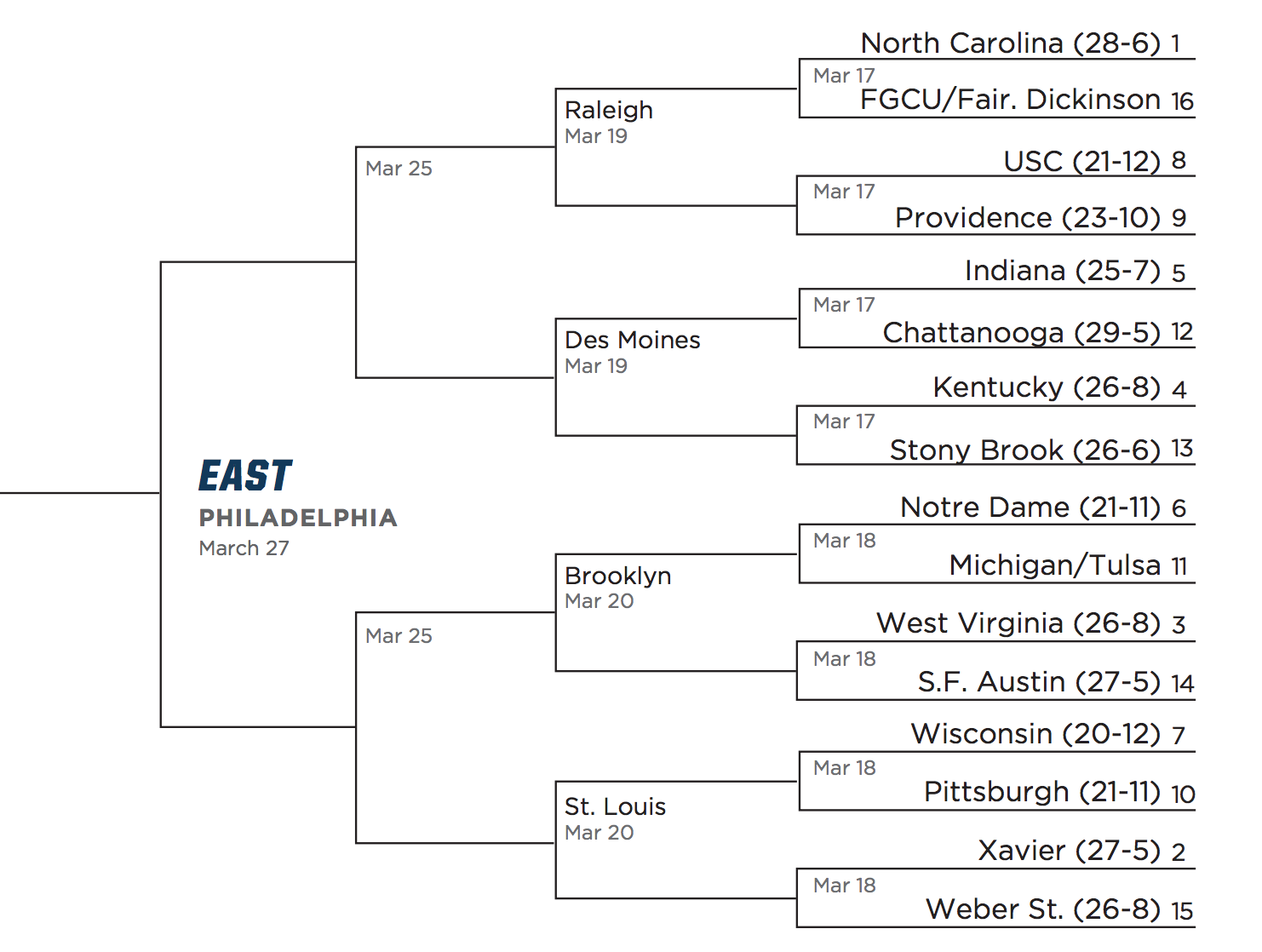 The Mountaineers don’t have an easy road by any stretch of the imagination. Stephen F. Austin is a damn good No. 14 seed — we’ll get to that in a second — and Notre Dame matches up really well with them — we’ll get to that as well. But I think WVU can get out of the first weekend, and if they do, they’ll likely draw a tantalizing matchup with a Xavier team that struggles against the kind of pressure that WVU plays with.

Kentucky, on the other hand, is staring at future matchups with Indiana and North Carolina, which is probably why John Calipari was so aggravated about Kentucky’s draw. That said, I think that UK is playing as well as just about anyone in the country this days, and I think they have the horses to make a run.

Assuming the Irish can get past whichever questionable bubble inclusion gets out of the play-in game, they have a terrific draw against, potentially, both West Virginia and Xavier. The Irish have good, veteran guards that haven’t been turnover prone in their back court, and if they attack WVU’s press to score, they should get a myriad of open threes early in the shot clock. And against Xavier, they’ll ask Demetrius Jackson to break down the Musketeer defense since the Irish have the shooters to force Xavier out of their 1-3-1 zone. Last year’s Notre Dame team was unequivocally better than this year’s, but I think this year’s team has a better chance of getting to the Final Four.

FEEL LIKE GAMBLING?: No. 2 Xavier to the Final Four

While I don’t love Xavier’s matchups in the later rounds, I do love this Xavier team. They’ve got so many guys that can beat you in so many different ways. Trevon Bluiett can play the three or small-ball four, Jalen Reynolds and James Farr and big, strong and mean, and Edmond Sumner is a total difference-maker when he plays well. Head coach Chris Mack also has a reputation for winning games in March. Again, the issue for Xavier in this even isn’t their players, it’s the matchups they drew.

BEST OPENING ROUND MATCHUP: No. 3 West Virginia vs. No. 14 Stephen F. Austin

We already touched on this game, but it’s going to be an intense, physical, up-and-down game that should be a terrific watch.

CBT PREDICTION: Kentucky continues to play great basketball as they advance through the region and to the Final Four.