The Sun Belt has a number of intriguing teams, headlined by Arkansas-Little Rock, which has racked up a 27-4 record this season. One of the more unique aspects of this tournament is the top two seeds, the Trojans and Louisiana-Monroe, get double-byes into the semifinals in New Orleans. Just two wins will put either in the NCAA tournament. 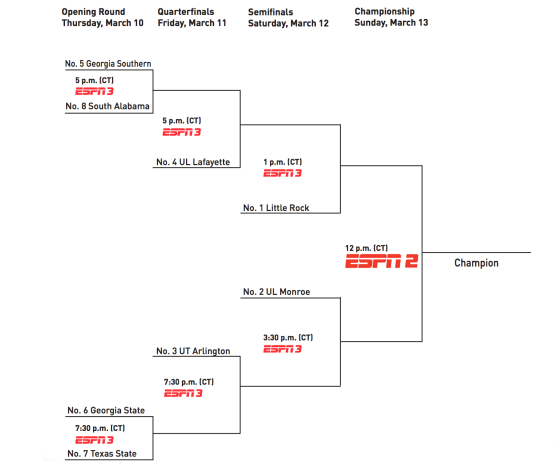 Little Rock might be one of the strongest favorites in any conference tournament this season. The Trojans may have three league losses, but they’re far and away the Sun Belt’s best team with wins over San Diego St. and Tulsa on the resume. This is a very good team that will likely be a trendy upset pick next week.

And if they lose?: Louisiana Monroe

Analytics don’t particularly like the Warhawks, but they’ve won 13 of their last 14, a run that includes a win over UALR. Louisiana Monroe’s chief offensive weapon is their ability to control tempo. Star forward Majok Deng can play.

The 6-foot-9 senior averaged 18.8 points and a career-high 12.9 rebounds per game for the Ragin’ Cajuns while shooting 51.4 percent from the floor. He also blocked 1.8 shots per game.

Beard inherited a team that went 13-18 overall last year, and guided them to a 27-4 record and a likely NCAA tournament berth. The 10-0 start was the best in program history, and the Trojans had the league title sewn up weeks ago.