The regular season in the WAC played out the way many expected it to. Even with Grand Canyon and CSU Bakersfield well positioned to challenge reigning champion New Mexico State, in the end Marvin Menzies’ Aggies were simply too much for the competition. With the conference’s best player in Pascal Siakam leading the way, New Mexico State will arrive at the Orleans Arena the prohibitive favorite to cut down the nets for a fifth consecutive season. And with Grand Canyon still in their Division I transitional period there’s one less challenger capable of stopping the Aggies from doing so. 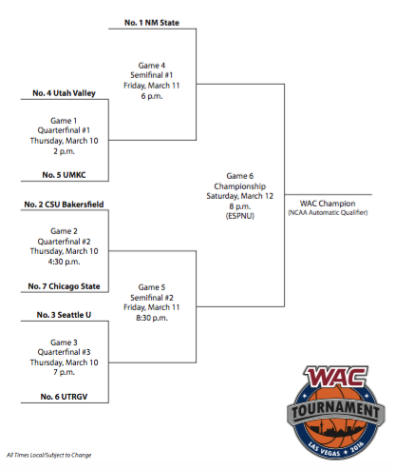 The Aggies went 13-1 in WAC play, with the lone defeat being a four-point loss at Grand Canyon back on January 9. Siakam led the way, averaging 18.8 points, 12.4 rebounds and 2.8 blocks per game while shooting 54.6 percent from the field in conference games (all tops in the WAC). Guard Ian Baker is one of the conference’s best perimeter shooters, and the Aggies have a host of other contributors capable of stepping forward on any given night. Them not winning the tournament would be a significant surprise.

And if they lose?: CSU Bakersfield

If there’s one team in the field that has a shot at matching up with Siakam and the rest of the NMSU front court, it’s Rod Barnes’ Roadrunners. Veterans Aly Ahmed and Kevin Mays have been good all season long for the two-seed, which has four players averaging at least 11 points per game (guards Dedrick Basile and Damiyine Durham being the other two players). With a defense that is one of best in the WAC, Bakersfield is the team with the best shot at dethroning New Mexico State.

In conference games Siakam led the WAC in scoring, rebounding, field goal percentage and blocked shots. Regardless of what opponents attempted to do to slow him down, the sophomore was still productive and that benefitted his teammates as well.

A case can be made for Grand Canyon’s Dan Majerle, whose team finished the regular season with a 25-6 record. But when your team is as dominant as New Mexico State was, with their lone WAC defeat coming by four points, you get the trophy. Menzies won his first Don Haskins Coach of the Year award last March, and given the work he’s done with this year’s team he should win it for a second consecutive season.