As expected the Big West season was a competitive one, with Hawai’i and UC Irvine sharing the regular season title and Long Beach State and UCSB both winning double digit games in conference play as well. Now comes the conference tournament, where the Rainbow Warriors are the top seed and will look to earn their first NCAA tournament bid since 2002. The road to the title won’t be an easy one however, as the Big West has multiple teams capable of cutting down the nets in Anaheim. Plus, the top seed hasn’t won this event since Long Beach State did so in 2012. 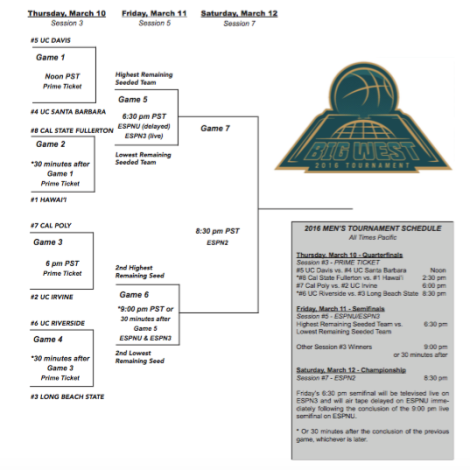 Earning the top seed in the tournament not only got the Rainbow Warriors an automatic bid to the NIT should the need it, but it also keeps them away from the one team that they’ve struggled to match up with this season (Long Beach State) until the title game. Stefan Jankovic has been a much-improved player for the ‘Bows in the front court, and the presence of tough, talented guards such as Roderick Bobbitt, Quincy Smith and Aaron Valdes allows Hawai’i to get after teams defensively. While they were swept by The Beach, the ‘Bows did sweep both UC Irvine and UCSB.

And if they lose?: UC Irvine

Russell Turner’s Anteaters have won at least a share of two of the last three Big West regular season titles, and they’re a veteran group that has the talent needed to make a second straight trip to the NCAA tournament. 7-foot-6 junior center Mamadou Ndiaye serves as quite the deterrent in the middle of their zone defense, and guards Alex Young and Luke Nelson lead the way on the perimeter. UC Irvine led the Big West in many of the major statistical categories on the defensive end of the floor this season, which makes them a threat to take home the crown.

After averaging 10.6 points and 4.9 rebounds per game in his first season at Hawai’i, the Missouri transfer took a significant step forward in 2015-16. Jankovic leads Hawai’i in both scoring (15.7 ppg) and rebounding (6.8 rpg), and he’s shooting 55.9 percent from the field and nearly 39 percent from three. In conference games, Jankovic averaged 16.9 points and 7.3 rebounds per contest, ranking in the top three in the Big West in both categories.

This is an easy choice. In his first season at the helm Ganot led the Rainbow Warriors to their first Big West title, and thanks to a sweep of the season series with UC Irvine they’ll be the top seed in Anaheim. Most of this rotation was on last year’s team that reached the Big West title game, including Roderick Bobbitt, Aaron Valdes and Stefan Jankovic, and Ganot was able to make this team even better. Add in dealing with an NCAA investigation that began prior to his arrival, and Ganot is the pick.

PREDICTION: Hawai’i ends the top seed’s recent run of futility in this tournament with a win over UC Irvine in the title game.