There may not be another conference in America with as much on the line from a bubble standpoint this week as the American Athletic Conference. With SMU on the sidelines as a result of NCAA penalties, the other ten members convene in Orlando with the top dogs all looking to sew up a bid to the NCAA tournament. Winning the automatic bid is the best way to do that, but with four teams harboring realistic hopes of earning an at-large bid some will likely have to sweat out Selection Sunday.

Temple managed to win the regular season title outright, but there’s still some work for Fran Dunphy’s team to do. The two-seed is Houston, whose non-conference slate likely puts them in a position where they need to win out in Orlando, and seeds three through five (Tulsa, Cincinnati and Connecticut) all find themselves on the bubble. That should make for an intense four days in Orlando, and only the winner will be able to breathe easy in the wait for the announcement of the NCAA tournament field. 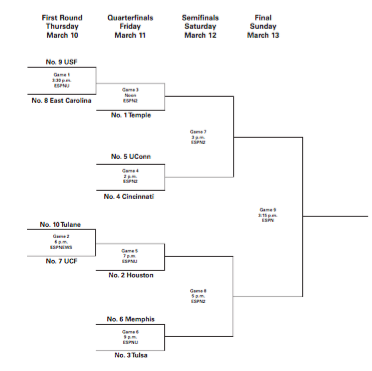 The Owls managed to win their first outright regular season conference title since 2012, when they were still in the Atlantic 10. This year’s group has done it with defense, as in conference games they ranked third in field goal percentage defense and first in three-point percentage defense. Offensively senior guard Quenton DeCosey’s led the way, with forward Obi Enechionyia being a tough matchup due to his ability to step outside at 6-foot-9 and emerging as one of the American’s most improved players. Add in contributors such as forward Jaylen Bond and point guard Josh Brown, and Temple has enough to win the tournament. Close games shouldn’t cause much concern either, as in conference games decided by five points or less they’re 7-2.

And if they lose?: Houston

The Cougars arrive in Orlando as one of the hottest teams in the American, as they’ve won nine of their last 11 games (6-1 in their last seven). Forwards Damyean Dotson and Devonta Pollard combined to average 28.3 points per game in American play, and on the perimeter Rob Gray Jr. is the team’s leading scorer (16.3 ppg overall) and the point guard tandem of Purdue transfer Ronnie Johnson and freshman Galen Robinson Jr. has been a positive as well. Kelvin Sampson’s rebuilding job has gone well to this point, and it wouldn’t be a shock if they landed the automatic bid.

Josh Pastner’s Tigers have the league’s top scoring duo in forwards Dedric Lawson and Shaq Goodwin, and there’s talent on the perimeter as well. But can they put it all together over the course of three days? That remains to be seen.

Moore won the award last season and he’d be a good choice for the 2016 edition of the award as well. The senior point guard led the way for a team that was ranked for most of the season despite being ineligible for postseason play, averaging 15.9 points and 4.9 assists per game. A good case can be made for Temple’s Quenton DeCosey as well.

Sure, this can be seen as giving the award to the man whose team was picked to finish sixth in the preseason coaches poll. But Dunphy deserves this honor just as much for the way the Owls played once out of non-conference play. Temple began play in the American with an overall record of 5-5, only to take a considerable leap forward in conference play. Led by Dunphy and seniors DeCosey and Jaylen Bond, Temple won the American outright with a conference record of 14-4.