There’s plenty of star power and intrigue in this year’s SEC tournament. Despite their recent overall dominance, this isn’t an event that Kentucky has owned in recent years, and the Wildcats, while the favorites, will have plenty of competition from the league’s upper echelon this season. The top four seeds (Texas A&M, Kentucky, South Carolina and LSU) receive byes into the quarterfinals while Tennessee and Auburn faceoff Wednesday trying to join the rest of the league in the “second round.” 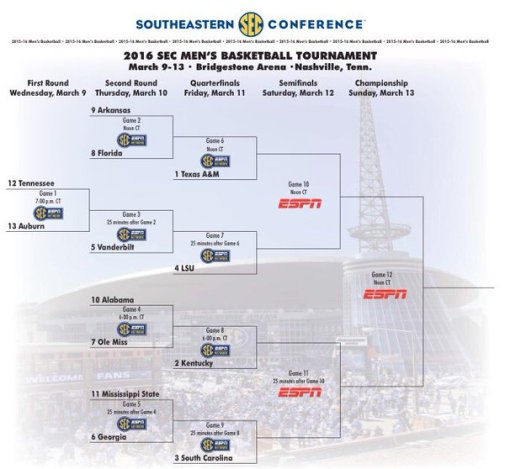 There have been plenty of questions about this group of Wildcats, but there’s no doubting they’re rounding into form at just the right time. Skal Labissiere appears to be breaking through after a mostly lackluster season, and if that continues, that raises the ceiling for an already immensely talented team.

And if they lose?: Texas A&M

That four-game losing streak that had alarm bells blaring in College Station last month appear to be well in the rear view with the Aggies entering the postseason winners of six straight. That streak includes victories over Kentucky and Vanderbilt. Billy Kennedy’s group is going to be a tough out.

The Tigers have been a disappointment this season and they’re certainly not heading into the tournament playing high-level ball, but they have a great talent in Ben Simmons and the need to perform if they’re going to sneak into the NCAA tournament field.

At the start of the season, it was largely assumed Ben SImmons would be the easy choice here, but instead the 5-foot-9 point guard averaged 16.6 points and 7.4 assists per game while establishing himself as a no-doubt All-American. He’s fantastic on the other side of the ball as well, setting the Wildcats’ defensive tone from the point guard position.

It’s easy to underrate just how hard it is to reboot your roster after massive NBA defections every year because Calipari has done it so well so often, but the fact of the matter is Kentucky lost seven players early to the NBA draft and still finished atop the SEC standings. And now it looks like Calipari’s prodding of Labissiere is paying off at just the right time as well.