The Atlantic 10 will be one of the most intriguing events to watch over the final few days before the NCAA tournament. Not only is the A-10 Tournament itself a wide-open field, filled with contenders who could win it all, but there are also four teams with NCAA tournament at-large concerns that could use some more wins before Selection Sunday. While Dayton looks to be comfortably in the field, VCU, St. Bonaventure, Saint Joseph’s and George Washington all find themselves on the bubble.

The conference tournament quarterfinals might feature a game that is essentially an NCAA tournament play-in game as No. 5 seed George Washington could face No. 4 seed Saint Joseph’s, as both teams could use another win for their profiles. Don’t be surprised if a lower-seeded team wins this event, either. The No. 4 or No. 5 seed has been the winner of the A-10 tournament in three of the last four years. 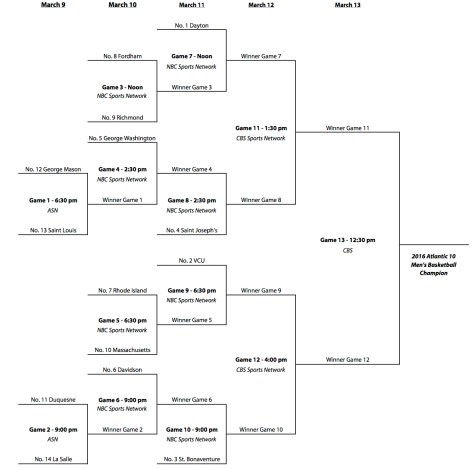 The Flyers haven’t finished the regular season on the strongest of notes, but they’re still the No. 1 seed and the team with the best path to make the finals. With a balanced roster, the Flyers have a lot of experienced pieces who have been successful in March before as they’re led by Charles Cooke (15.8 ppg, 6.0 rpg), Dyshawn Pierre (12.6 ppg, 8.5 rpg) and Scoochie Smith (11.8 ppg, 4.1 apg). With a top-20 Kenpom defense, the Flyers can also be counted on to get consistent stops.

And if they lose?: VCU

Shaka Smart might be gone, but this is still a very talented Rams team that has a lot of experience. Senior Melvin Johnson (18.0 ppg) is one of the A-10’s best scorers while Korey Billbury (11.2 ppg, 5.1 rpg) and JeQuan Lewis (10.3 ppg, 4.9 apg) are also talented and experienced guards who can hit shots. Much like Dayton, VCU’s defense is rated in the top 20 on Kenpom and this group can really cause a lot of problems on that end of the floor.

With plenty of players who can put up points — including junior point guard Jack Gibbs, the nation’s third-leading scorer — the Wildcats are dangerous if they get hot. Besides Gibbs, Bob McKillop’s team has floor spacing and is one of the most efficient offenses in the conference.

The junior was remarkably consistent in stuffing the stat sheet once again for the Hawks as he averaged 17.0 points, 7.8 rebounds and 4.5 assists per game. Bembry has scored in double-figures in every game this season and been huge in moving the ball within the offense as well. The 6-foot-6 Bembry also shot 47 percent from the field and dropped his turnovers to 2.1 per game in 36.8 minutes per contest.

St. Bonaventure was picked to finish eighth in the Atlantic 10 preseason coaches’ poll and the Bonnies ended up as co-regular season champions of the league along with Dayton and VCU. Things didn’t look so positive for Schmidt’s team after a 4-3 start in conference play, but St. Bonaventure closed out the regular season strong and are in position to make the NCAA tournament as an at-large team if they take care of business in Brooklyn this week.

Defining moment of the season: Marcus Posley dropped a Division I-season-high 47 points on March 2 as St. Bonaventure picked up a critical at-large win over Saint Joseph’s.

CBT Prediction: VCU makes a run to the A-10 title, picking off Dayton along the way and ensuring that Will Wade’s statue will be built in Richmond before Shaka Smart’s.