The Big Ten enters conference tournament week with some intriguing storylines after an unbalanced league schedule and a lot of competitive teams towards the top of the standings. Indiana took home the conference’s regular-season title by two full games, but the Hoosiers played a much weaker schedule than many of their top Big Ten counterparts as this conference tournament should truly tell us where Indiana is at heading into the Big Dance.

Michigan State is also peaking at the right time as Denzel Valentine looks like a potential National Player of the Year and the Spartans look like a major national-title contender. Besides the top two seeds, Maryland, Purdue, Iowa and Wisconsin will all try to improve their NCAA tournament seeding with strong showings in Indianapolis while Michigan and Ohio State try to do everything they can to claw their way into the at-large discussion. 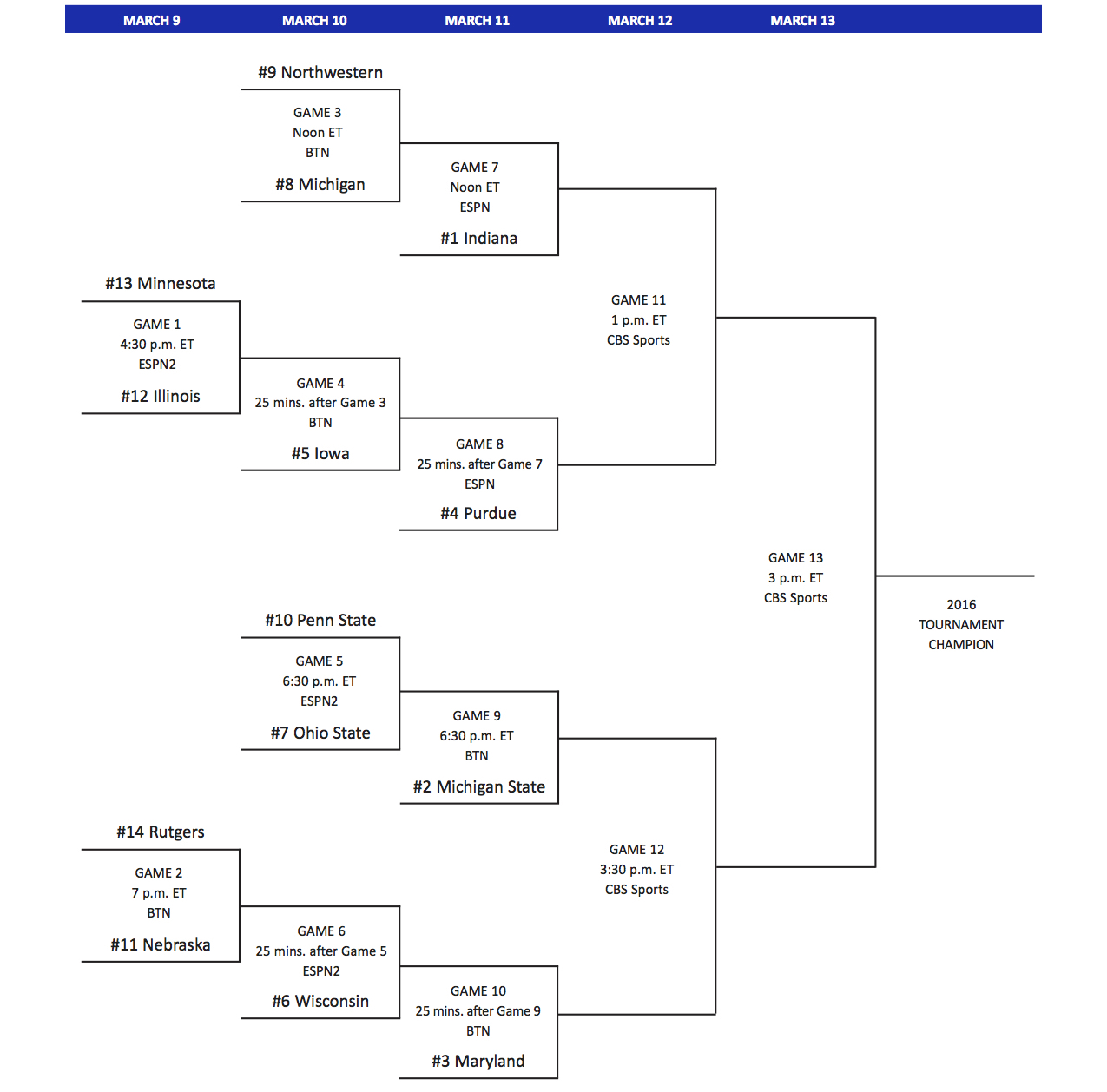 Would you want to bet against Michigan State in March? Yeah, me neither. The Spartans have won six consecutive games entering the Big Ten Tournament (by an average of 21.1 points per game) as they’re playing perhaps their best ball of the season. Denzel Valentine is one of the best players in the country, Bryn Forbes is a great second option and one of the nation’s best shooters and the Spartans might have more talent on this roster than last year’s Final Four team.

And if they lose?: Indiana

The No. 1 seed in the Big Ten Tournament, the Hoosiers played an easier schedule than some in the conference this season, but they still deserve plenty of credit for winning the league by two full games. Winners of five consecutive games, Indiana has improved immensely on the defensive end since the start of the season and they feature one of the most potent offenses in the country. Although Indiana is the No. 1 seed, they’re 0-1 against No. 2 seed Michigan State this season, suffering an 88-69 loss in East Lansing on Feb. 14.

Entering as the No. 6 seed, it’s hard to call the Badgers a “sleeper” in this since they’re safely in the NCAA tournament field, but they do have the kind of team that can make a run in Indianapolis. If the Badgers get Maryland in the quarterfinals, they gave the Terps everything they could handle in splitting during the regular season. Wisconsin also owns a win over the conference’s top two seeds, Indiana and Michigan State, this season.

The runaway winner of this award is Valentine, who is also a strong contender for National Player of the Year. The 6-foot-5 senior was simply dominant whenever he took the floor this season, as Valentine averaged 19.6 points, 7.5 rebounds and 7.5 assists per game. While filling up the box score every night, Valentine was also ruthlessly efficient, as he improved all of his shooting splits from his junior season (47% FG, 84% FT, 45% 3PT). Besides putting up big numbers, Valentine is perhaps the country’s most important emotional leader, as he gives the Spartans the kind of attitude that makes them legitimate national title contenders when he’s on the floor.

You could just as easily give this award to Indiana’s Tom Crean for the tremendous job he’s done this season, but Indiana was supposed to be good. Wisconsin was in shambles when Greg Gard took over for Bo Ryan on Dec. 15. It took awhile for the Badgers to adjust to the veteran assistant — and overcome the emotional departure of Ryan — but Gard has coached Wisconsin to the point of making a NCAA tournament at-large bid when they were only 9-9 on Jan. 12. That’s a remarkable turnaround, and now, the Badgers are a team that nobody wants to play in March again.