The ACC was weird this season.

Prior to the start of the season, it looked like the nation’s best conference, at least at the top. UNC was going to be a national title contender. Duke was, too. Virginia, Miami and Notre Dame were going to be contenders for the league title. Louisville was going to be … eligible.

And now here we are in March, and it feels like UNC sputtered to an outright league title, if that’s even possible, while Louisville got banned from the postseason and Duke lost the one guy that would give them depth and lineup versatility. Notre Dame doesn’t look quite as good as we thought, while Miami and Virginia both took five losses during league play.

That said, there may not be a tournament across the country with more individual talent than the ACC tournament. And that always makes for a fun week. 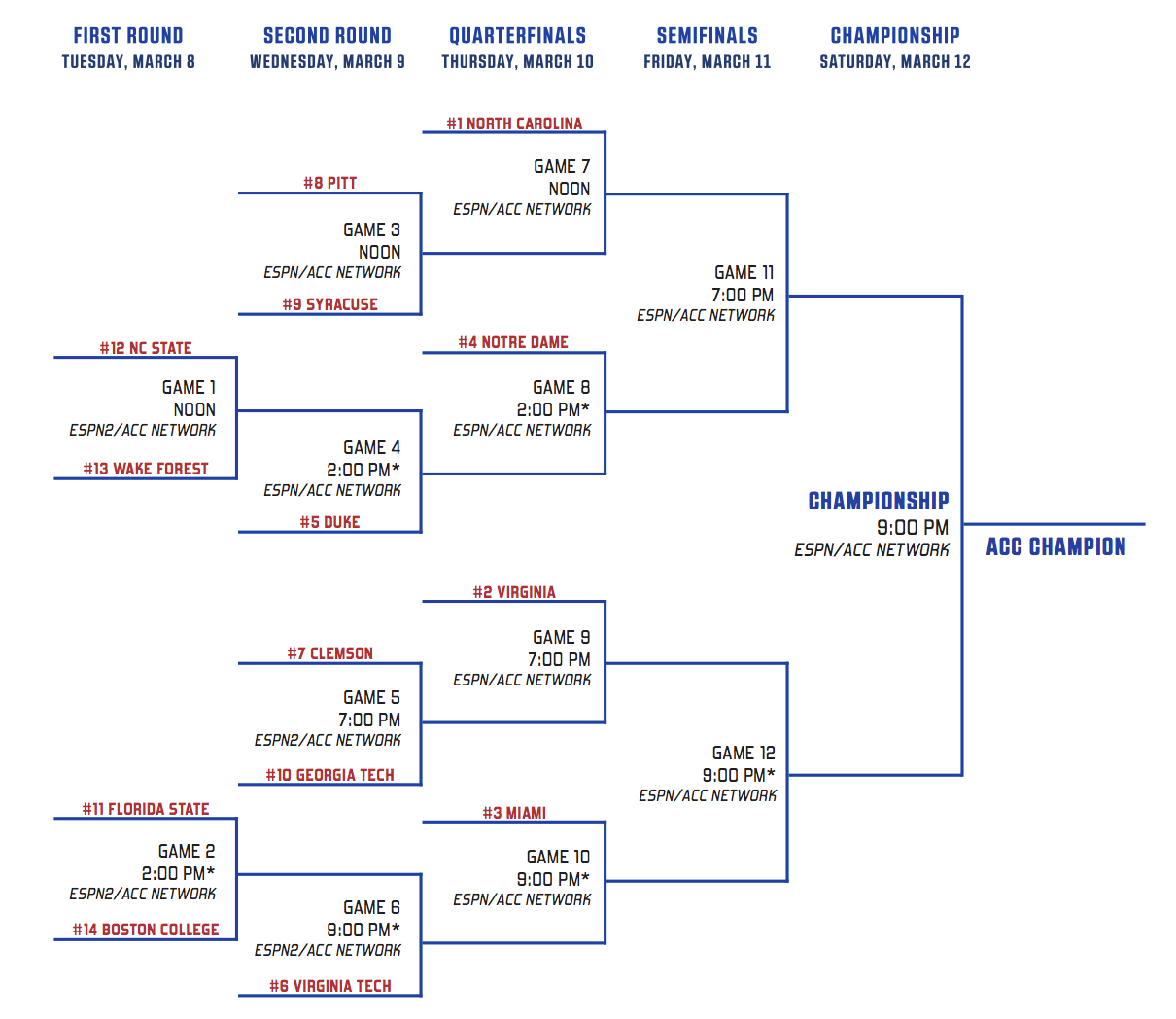 I think Virginia is the best team in the ACC. They’re by far the best defensive team in the ACC tournament and they have an offense that doesn’t score much but is ruthlessly efficient. Malcolm Brogdon is capable of going into star mode and carrying this group, and with the veterans they have up and down their lineup and the quality size they have on the interior, I think they can matchup with just about anyone. Remember, they share the league title with North Carolina if Grayson Allen’s game-winner in Cameron is called a travel.

And if they lose?: North Carolina

The outright ACC regular season title winner, we know how good UNC can be. I can’t trust them in March until Marcus Paige shakes off this shooting funk he’s currently mired in and they prove they can win big games and execute in clutch moments.

The Hokies put together one of the biggest turnarounds in college hoops this season. Remember, they lost to Alcorn State in their season opener. Now they’re the No. 6 seed in the ACC tournament after beating Miami in impressive fashion in the regular season finale. They’ve won five straight, and you have to go back to December to find a loss that wasn’t a true road game or against a top 12 team.

Brogdon is the NBCSports.com pick because of the impact that he has on both ends of the floor. I’d argue that he is the best perimeter defender in the ACC, a guy that can lock down opposing perimeter players as well as anyone and a key reason that Virginia is once again a top ten defense. But he’s also the most efficient scorer in the conference, averaging 18.4 points on a team that plays the fewest possessions of anyone in college basketball.

This was one of the harder awards to pick simply because there are so many that are deserving of this award. Coach K, Jim Larrañaga, Rick Pitino, even Roy Williams. They all have a strong case. I went with Williams because he was able to get a Hokies team that won eight total ACC games the last three years and lost their season opener to Alcorn State to 18 wins and 10-8 in the ACC — the No. 6 seed in the tournament — while knocking off two top ten teams.

Defining moment of the season: To me, there were two defining moments of this ACC season. The first was the injury to Duke’s Amile Jefferson, which has more or less eliminated an under-manned team from Final Four consideration. But the moment that everyone saw was UNC’s collapse at home against those very Blue Devils, a sign of just what ails a team that every thinks should be better than they are:

CBT Prediction: Virginia sneaks past Miami and then knocks off North Carolina in the ACC title game as Malcolm Brogdon pops off for 30.