The expectation before the season began was that Mike Davis’ Texas Southern Tigers would win another SWAC regular season title, and that’s exactly how things played out as TSU won the conference by three games. Balanced offensively, with five players averaging at least 9.8 points per game in SWAC competition, the Tigers were the best team in the SWAC on both ends of the floor from an efficiency standpoint. But even with that dominance they aren’t invincible, as there are a couple teams in the field capable of knocking Texas Southern off its perch atop the SWAC. 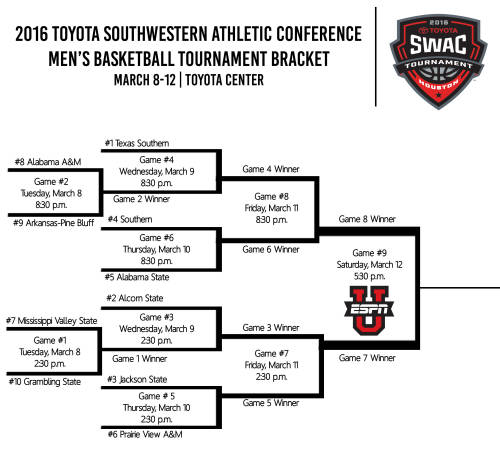 The Tigers are the clear favorites in Houston. They ranked at or near the top of the SWAC in many of the major statistical categories, and as mentioned above they have multiple players capable of hurting opponents offensively. At the top of the list is guard Chris Thomas, who averaged 15.6 points and 4.4 assists per game in conference games. And then there’s forward Derrick Griffin, who can make a case for being the best athlete in college basketball. A one-time five-star football recruit, the 6-foot-7 Griffin led the SWAC in rebounding (12.4 rpg) and field goal percentage (67.2 percent). Whatever an opponent throws at Mike Davis’ team, there’s a good chance that they’ll find an answer.

And if they lose?: Alcorn State

The Braves can’t represent the SWAC in the NCAA tournament due to low APR scores, but they can win the league’s conference tournament. That should serve as motivation for a team that’s already exceeded expectations in the big way, with guard Tamarcio Wilson and forward Octavius Brown combining to average 29.3 points per game in SWAC competition. Defensively the Braves don’t force a lot of turnovers but they’re solid inside the arc thanks to the presence of Brown and Patrick Onwenu (2.7 blocks per game combined). If they take better care of the basketball than they did during the regular season (ninth in the SWAC in turnover percentage), they’ll have a shot.

Thomas ranked in the top ten in the SWAC in three major statistical categories: scoring (15.6 ppg- sixth), assists (4.4 apg- fourth) and field goal percentage (52.7 percent- sixth). While just one of the reasons why the Tigers have been the class of the SWAC, Thomas is a very important one. Thomas is shooting nearly 54 percent inside of the arc, as his ability to break teams down off the bounce results in quality shots for himself (and others) more often than not.

Picked to finish ninth in the ten-team SWAC before the season began, Robinson’s Braves won 13 league games to earn a second-place finish in his first season at the helm. Alcorn State finished the season ranked third in the SWAC in both offensive and defensive field goal percentage and second in offensive rebounding percentage (conference games only), areas which helped them finish second despite having the SWAC’s worst turnover margin.