The Big Sky tournament underwent massive changes in advance of this season, as all 12 teams will get to participate and a neutral site will be used. Reno will be the site this year, which is a big difference from seasons past in which the top seed served as the host. As expected Weber State and Montana were the top two combatants for the regular season crown, with Randy Rahe’s Wildcats claiming the title despite losing league Player of the Year candidate Joel Bolomboy for two games due to injury. The Wildcats and Grizzlies will be the favorites in Reno, but getting to the title game will be a challenge for both. 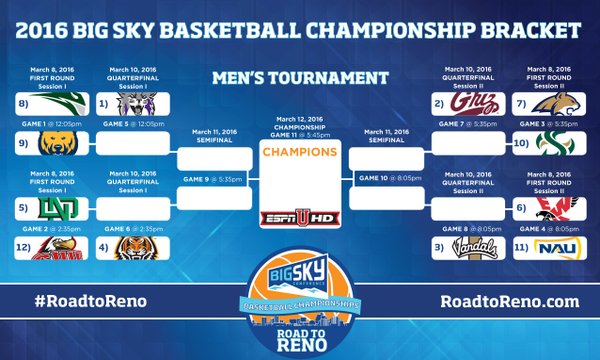 Many of the players in Randy Rahe’s current rotation were members of the team that reached the NCAA tournament two seasons ago, which should help Weber State even with the changes to the format and location of the Big Sky tournament. Of course it also helps to have talent, and there’s no shortage of that in Ogden. It all starts with the Big Sky’s best big man in Joel Bolomboy, and guard Jeremy Senglin (17.2 ppg in Big Sky games) is a force to be reckoned with as well. And with nine players playing at least 15 minutes per game in conference play, the Wildcats have the depth needed to navigate three games in three days.

And if they lose?: Montana

The Griz missed out on a share of the Big Sky regular season title as they lost to Northern Colorado Saturday, but Travis DeCuire’s team won six of their final eight games with the other loss coming at the hands of Weber State. Martin Breunig has been one of the conference’s best players, and the play of guards Walter Wright and Michael Oguine has been key as expected starter Mario Dunn missed 12 games due to injury. Only Eastern Washington was better in conference play from an offensive efficiency standpoint, and defensively the Griz ranked first in the Big Sky in both defensive rebounding and three-point percentage and third in field goal percentage.

Bolomboy was outstanding throughout for the regular season champions, averaging 18.2 points and 12.8 rebounds per game while also shooting 59.6 percent from the field. Bolomboy’s an incredibly tough matchup to deal with in the post, and when fouled he converted his free throws at a solid clip (73.8 percent in Big Sky games) as well.

Picked to finish dead last in the Big Sky preseason poll, Evans’ Bengals arrive in Reno as the four-seed. Idaho State won 11 conference games this season, with the perimeter tandem of Ethan Telfair and Geno Luzcando leading the way offensively. Those two combined to average 40.2 points and 4.6 steals per game in Big Sky play, and collectively the Bengals are a much-improved outfit from a season ago.