In recent years the regular season champion of the West Coast Conference would arrive in Las Vegas feeling secure about its chances of landing an NCAA tournament bid even if they didn’t managed to grab the league’s automatic bid. Things aren’t as comfortable this time around for either Saint Mary’s or Gonzaga, as their non-conference slates either lacked the challenging games (Saint Mary’s) or quality wins (Gonzaga) needed to provide some breathing room. That, along with the presence of BYU and Pepperdine, should make for an intense “long weekend” at the Orleans Arena, where the WCC will hope that this event can produce two NCAA tournament teams. 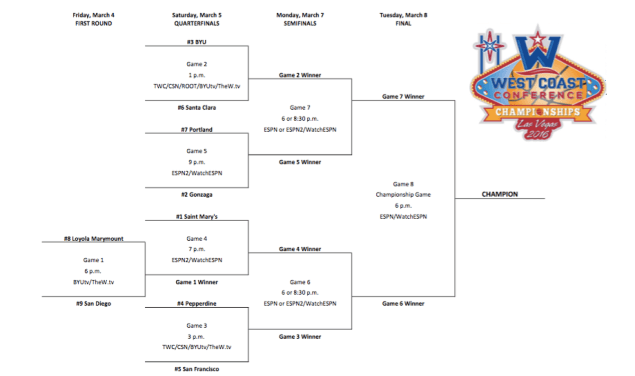 The Gaels surprised many by winning a share of the regular season title, as they were picked to finish fourth in the preseason poll. They’ll be the top seed this week thanks to their season sweep of Gonzaga, and with guards Emmett Naar and WCC Newcomer of the Year Joe Rahon leading the way head coach Randy Bennett has the pieces needed to win the tournament. Forwards Calvin Hermansson and Dane Pineau shouldn’t be overlooked either, as they’re second and third on the team in scoring behind Naar and 6-foot-10 freshman center Evan Fitzner was productive in both wins over Gonzaga (16.5 ppg, 3.5 rpg).

And if they lose?: Gonzaga

Mark Few’s Bulldogs are led by one of the best front court tandems in the country in senior Kyle Wiltjer and sophomore Domantas Sabonis. Wiltjer’s a face-up four with range well beyond the three-point line, thus providing Sabonis with the room he needs to operate from 15 feet and in. The question mark throughout this season has been the development of their perimeter rotation, but there has been progress. Josh Perkins was named to the WCC’s all-freshman team, and Eric McClellan the conference’s best defender. How that group, which includes Silas Melson and Kyle Dranginis, performs will be key for Gonzaga as they look to win the WCC tournament for the fifth time in the last six years.

The NCAA’s all-time leader in career triple-doubles (11), Collinsworth is the “straw that stirs the drink” for BYU. In WCC games he ranked in the top five in rebounds (third), assists (first) and steals (first), and at 15.6 points per game the senior ranked 13th in the conference in scoring. At 6-foot-6 he’s a tough matchup for opposing teams from a size standpoint, and his ability to find the likes of Chase Fischer and Nick Emery makes BYU a tough team to slow down offensively.

Saint Mary’s exceeded expectations this season, going from a team pegged by many as the one likely to fall out of a top three slot to one that grabbed the top seed in the conference tournament. For that Bennett should be praised, as the backcourt of Emmett Naar and Joe Rahon has meshed well and the front court has accounted for the graduation of Brad Waldow as well.