Ben Simmons is the most unique player in all of college basketball. He’s a 6-foot-10 power forward with the ball-handling and passing ability of a point guard. You put a big man on him and Simmons is beating him off the dribble even if the defender is playing seven feet off of him. If you put a guard on him, Simmons is going right to the rim, via a post-up, backing the defender down or attacking the offensive glass. And if you double-team him, he’s going to find whoever you leave open.

Tonight is Kentucky’s turn to get a crack as slowing down the most productive player in college basketball. How are they going to try to stop him? After speaking with a number of coaches who have game-planned for him this season, here’s what I think Kentucky will try to do:

1. Use Alex Poythress on him: For my money, Poythress is probably their best bet when it comes to slowing down Simmons. He’s strong and athletic enough to make him work in the paint and quick enough that Simmons shouldn’t be able to make him look like the chair that tried to guard Yi Jianlian. Other guys are going to get a crack at him — Marcus Lee, Derek Willis — but Poythress is the guy that I want on Simmons as much as possible. The Kentucky coaching staff has said that they’re going to try to use Isaiah Briscoe, and potentially Charles Matthews, on Simmons as well, but I’m not sure that’s a good idea. According to Synergy, 19.5% of Simmons’ half court offense comes via post-ups and 16.6% comes off of offensive rebounds, meaning that more than 36% of what he does in half court sets comes in the paint.

In other words, don’t let this happen to you, Kentucky:

2. Keep four sets of eyes on him at all times: The bottom line is this: No one man at the college level is going to be able to stop Simmons one-on-one. It’s just not going to happen. There needs to be plenty of help. As you can see in this example, Vanderbilt has four players staring down Simmons … 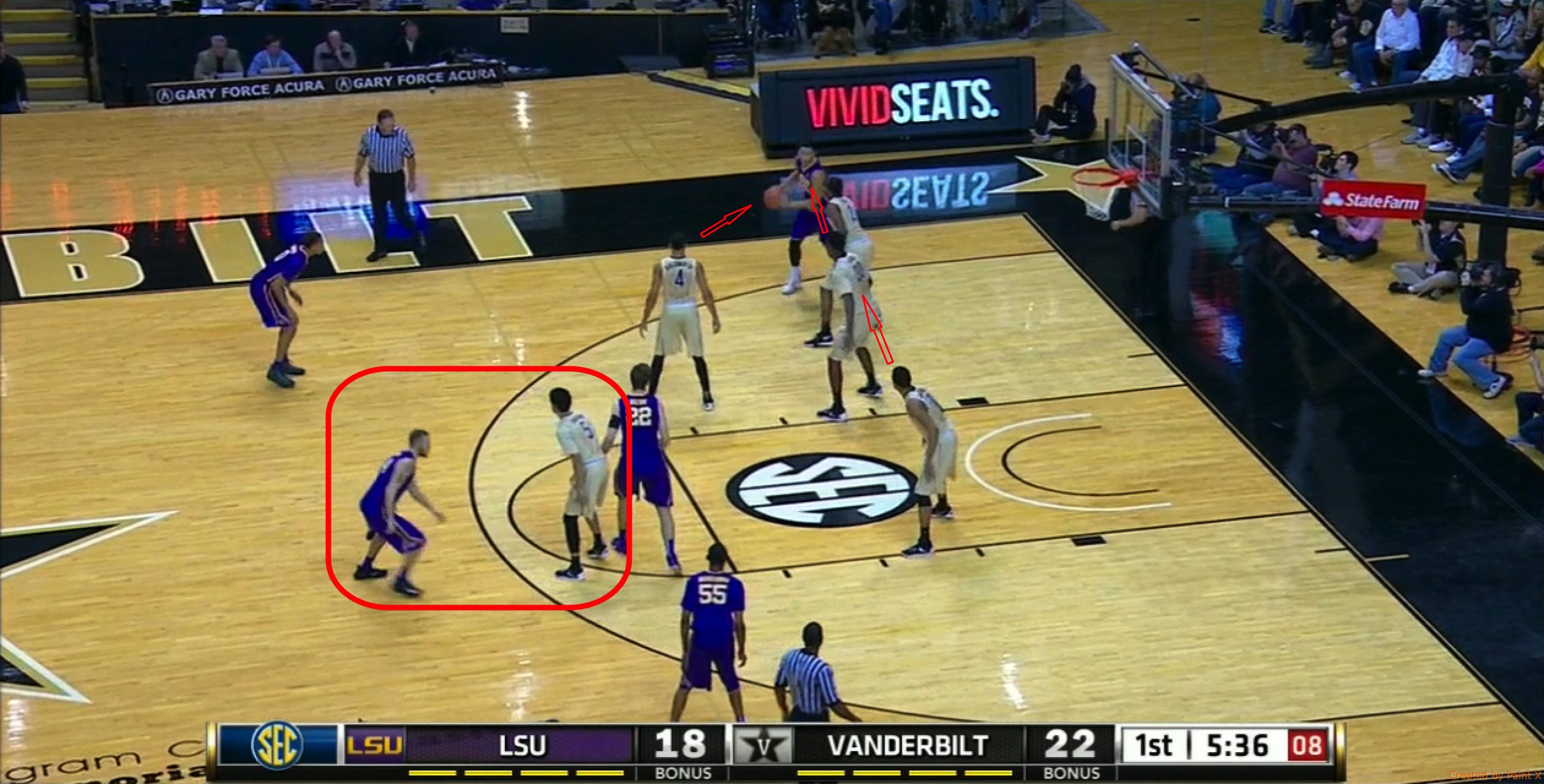 But none of them are able to get to the baseline quick enough to help on this drive:

3. So your defensive rotations have to be quick: In the screengrab above, you see Matthew Fisher-Davis sticking to Keith Hornsby. That’s important because Hornsby is by far their most dangerous secondary weapon. Simmons’ vision, however, is absurd. One staffer told me that “he throws the best skip pass I’ve ever seen.” He’s going to find the guys that are open, and his ability to throw a no-look pass is going to shift the defense, creating open shots that probably shouldn’t be open. I mean, just look at this pass: 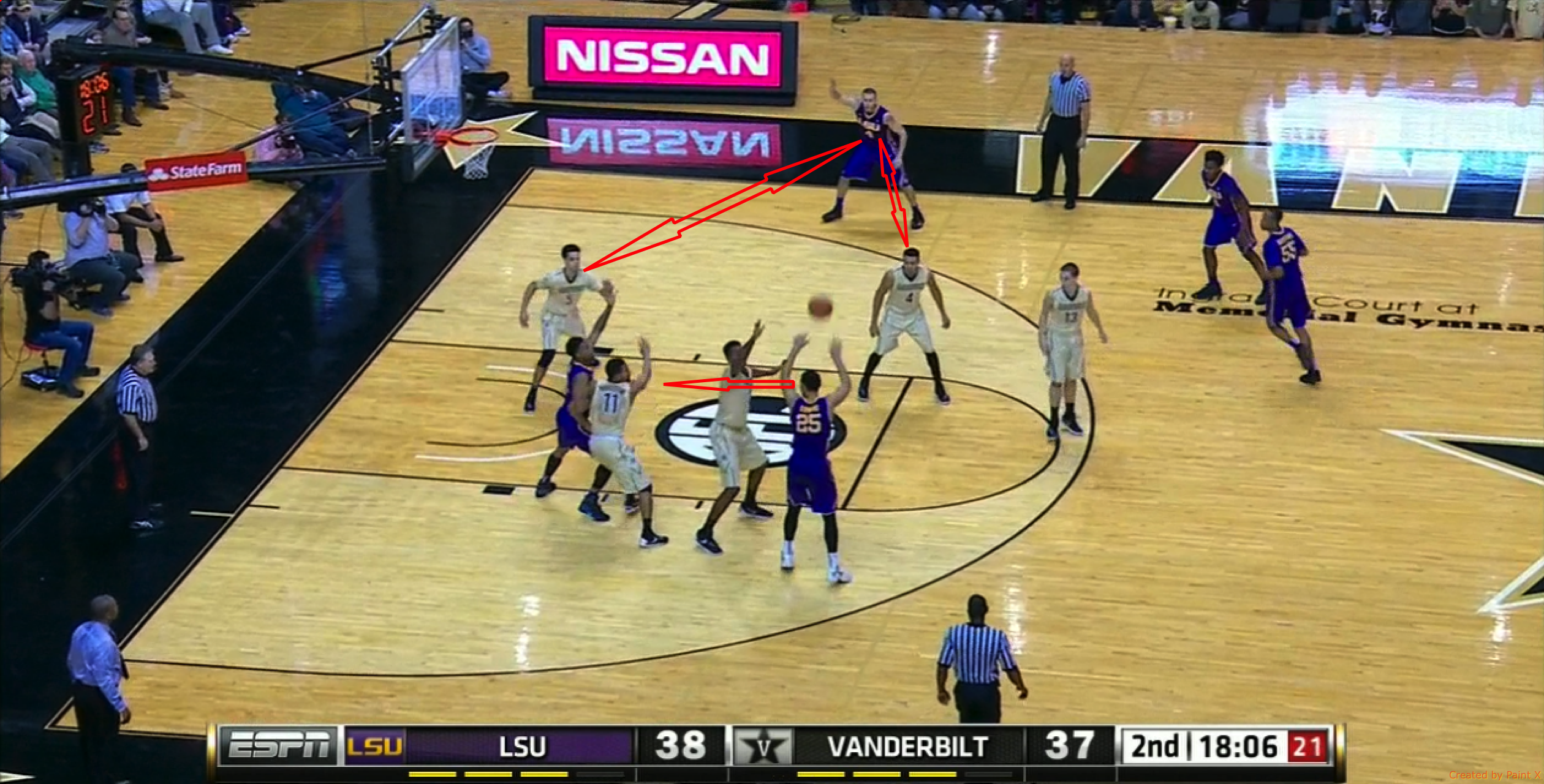 4. Don’t let anyone else beat you: There’s actually a fine line here. You see, Simmons is a more than willing passer. He’s proven throughout this season that, if his teammates are open, he’s going to get them the ball whether or not that’s actually what’s best for the team. More often than not, it isn’t, which is why his performance against Vanderbilt was so promising. He finally started to look like a killer offensively, taking advantage of every mismatch that he could.

So you want to make him a passer, but since that probably requires overhelping against a locked-in Ben Simmons, it means that other guys on the roster are going to have open threes and opportunities to attack closeouts. If I’m a coach, I’m fine with guys like Antonio Blakeney and Brandon Sampson taking 12-15 relatively good shots if it means the ball is out of Simmons’ hands. You might even be able to lump Tim Quarterman and Craig Victor in there as well. The one guy to watch out for is Hornsby, as he’s capable of popping off for 30 on any given night.

5. When he get out in transition, pray: He doesn’t need an outlet pass to get out and go. He can grab a defensive rebound and lead the break, and when he does, he can be impossible to stop.