[UPDATE 10:14 p.m: Gregg Marshall told NBCSports.com in a text message that Grady suffered a “spinal concussion” but that all tests four a spinal cord injury came back negative. “Should be better in a day or so. Very positive news.”]

Wichita State big man Anton Grady was stretchered off of the floor in the second half of a loss to Alabama after a nasty collision with Dazon Ingram.

The video can be seen above. There was nothing malicious about the way that Grady was injured. When he turned to run up the floor after missing a shot in the lane, he went face first into Ingram’s shoulder. He neck bent in an awkward directions and, after stumbling a few steps, he laid motionless on the floor.

It took 10 minutes for the training staff to strap Grady to a backboard and wheel him out of the arena. 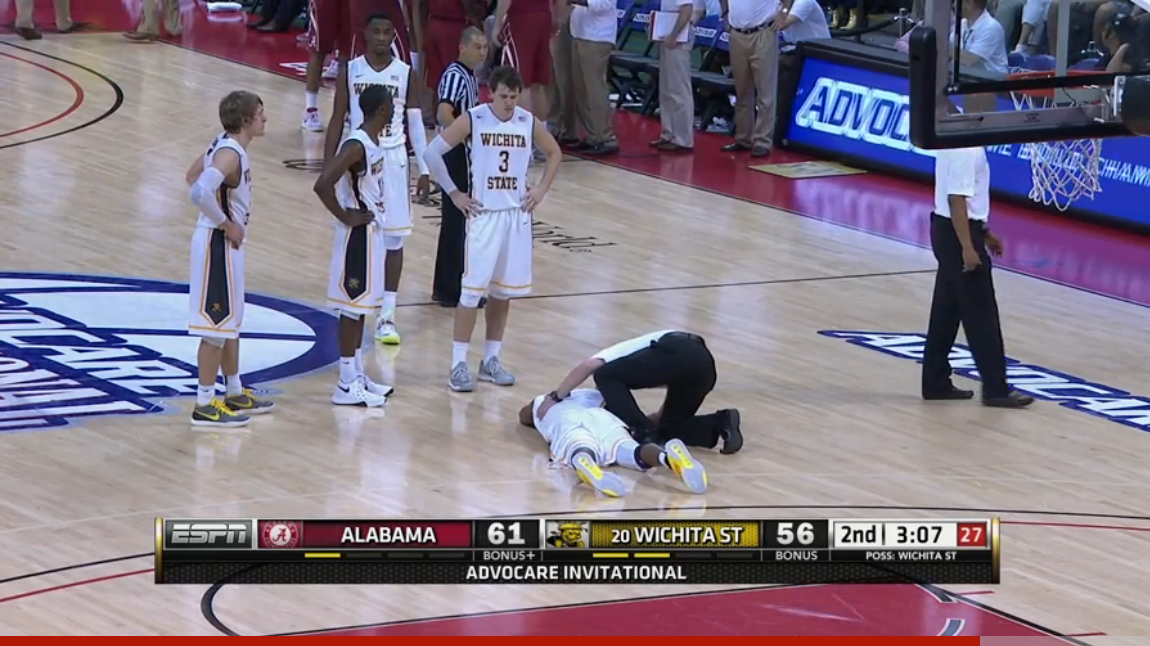 A Wichita State spokesman told NBCSports.com that Grady was taken to a local trauma center for evaluation and that he is “awake, alert and is answering questions appropriately”. He has feeling in his extremities and a CT scan came back negative on Friday evening and will be getting an MRI later tonight.

From a basketball perspective, the No. 20 Shockers lost their second game in a row and are now 2-3 on the season.

While for some the Shockers’ résumé is up for questioning following losses to USC and Alabama, two teams projected to finish in the bottom half of their respective leagues, the team’s health is the biggest concern.

Fred VanVleet has been dealing with a hamstring issue since the season began, and an ankle injury limited him in a loss at Tulsa earlier this month. He won’t play again until at least Dec. 5th. and who knows when he’ll be back to full strength. The same can be said for back up point guard and freshman Landry Shamet, who underwent surgery to address a stress fracture in the fifth metatarsal in his left foot. Their injuries have led to even more being asked of senior guard Ron Baker, and the loss of Grady for any significant amount of time certainly isn’t going to help matters..

These early-season losses won’t help Wichita State when it comes to the NCAA tournament, but it’s important to make note of the circumstances surrounding those defeats. To be shorthanded, with one of the absent players ranking among the nation’s best point guards, has an impact that has to be accounted for when evaluating Wichita State. The Shockers will add Conner Frankamp in mid-December, which will help them on the perimeter.

But with their rotation currently being in flux, it’s tough to make any definitive statements on what Wichita State will have to do in order to make another trip to the NCAA tournament. At this point Gregg Marshall and his staff will look for other contributors, one of whom being Markis McDuffie (14 points, seven rebounds vs. Alabama), to emerge and show themselves capable of picking up the slack.