For the third time in his illustrious coaching career, Larry Brown has been hit with NCAA sanctions.

Brown’s SMU program will be banned from the 2016 postseason and Brown himself will be suspended for 30 percent of the 2015-16 season, or nine games. SMU will also losing three scholarships a year over the course of the next three years. Brown was also hit with a two-year show-cause penalty while the program will be forced to deal with a myriad of recruiting restrictions in the coming years.

SMU’s penalties stem from an NCAA investigation into the recruitment and eligibility of former McDonald’s All-American Keith Frazier. Frazier was declared academically ineligible in the middle of the 2014-15 season, about the same time that former SMU assistant coach Ulric Maligi left the program. According to the NCAA’s findings, Maligi — who, like Frazier, was not named in the report — encouraged Frazier to enroll in an online course to help him get eligible. An administrative assistant obtained the login information for Frazier and completed the course work for him.

The NCAA also found that the assistant had a relationship with Frazier, going as far as babysitting his child during workouts.

SMU will vacate the wins that Frazier, who the NCAA deemed should have been ineligible as a freshman, participated in. Maligi will face no further punishment, while the administrative assistant was given a five-year show-cause penalty. 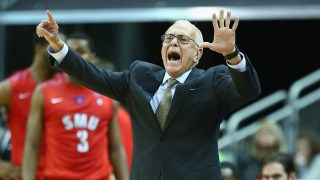 Brown was the head coach at UCLA and Kansas when, in the 1980s, both programs were given one-year postseason bans for NCAA violations that were committed under his watch. At UCLA, the NCAA investigated Brown’s dealings with infamous booster Sam Gilbert. In Dec. of 1981, the Bruins were hit with nine rule violations resulting in a postseason ban and a trip to the 1980 national title game being vacated.

Brown left UCLA in 1981 and, in 1983, became the head coach at Kansas. He’d eventually go on to win the 1988 national title with the Jayhawks, leaving after the season to coach in the NBA. Seven months later, the NCAA banned Kansas from the 1989 postseason, banning them from defending their title, and put Kansas on probation for three years for violations committed under Brown’s watch.

According to an AP story from 1988, the NCAA seriously considered giving the program the death penalty for one season.