The Battle 4 Atlantis tournament organizers deserve some credit, because they did an awesome job manufacturing the matchups in this year’s field.

It starts at the top of the bracket, where dormant local rivalries will be reborn. Gonzaga will square off with Washington on the same side of the bracket that Texas will be facing Texas A&M. The Bulldogs and the Huskies took a ten-year hiatus from their battle for supremacy in the state of Washington after Gonzaga won eight out of ten in the series. They’re scheduled to resume playing during the regular season in 2016-17.

Texas and Texas A&M is a much stronger rivalry on the gridiron, but the in-state rivals — both of whom could end up being top 25 teams this season — are no longer conference rivals, as the Aggies are Gigging ‘Em in the SEC these days.

On the other side of the bracket, UConn draws Michigan in the first round while Syracuse squares off with Charlotte. A win could mean the former Big East rivals will play with a trip to the title game on the line.

Here is the bracket in full: 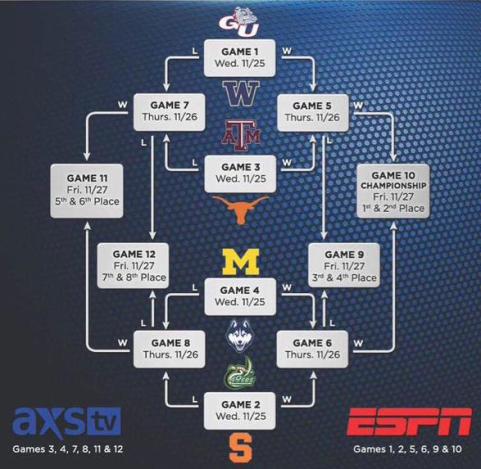