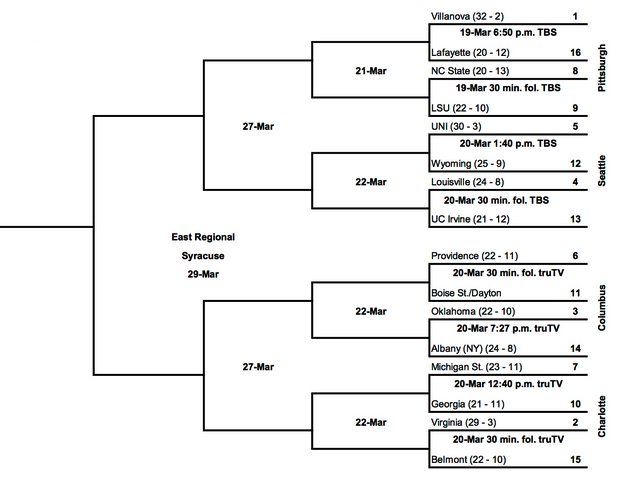 Every year, it seems like there is a region where all hell can break loose, and this year, I think that the East is the biggest through to cost you any chance of cashing in your office pool. Both top seeds — Villanova and Virginia — got potentially tough draws in the Round of 32. Louisville is arguably overseeded as No. 4. No. 5 Northern Iowa got a tough draw in the opening round, having to face Wyoming and Larry Nance Jr. And Providence has a guy that can carry his team through the bracket.

And you know what that means?

This will now end up being the only bracket to go all chalk. You’ve been warned. I think.

It’s a shame that Anderson got hurt when he did, but I just have a difficult time seeing Virginia get past both Michigan State and Oklahoma without Anderson at full strength, and until I see him playing at full strength, I think it’s safer to err on the side of caution. I still love this Oklahoma team. They run, they’re streaky but they can get hot from three, they have five threats to score in their starting lineup and Buddy Hield is a star. As far as Villanova is concerned, I think they’re too good to truly be tested by N.C. State, LSU or Louisville. Northern Iowa could give them some trouble, but I think they matchup well with Seth Tuttle.

If there is anyone in this region that can completely take over a game, it’s Kris Dunn. He’s the tournament’s biggest threat to go all Shabazz Napier on us. More on him in a bit, but for the record, those 15.8 points, 7.6 assists, 5.8 boards and 2.8 steals he averaged weren’t an accident.

CBT Prediction: Virginia cannot get past Oklahoma, opening the door for Villanova to get to their first Final Four since 2009.