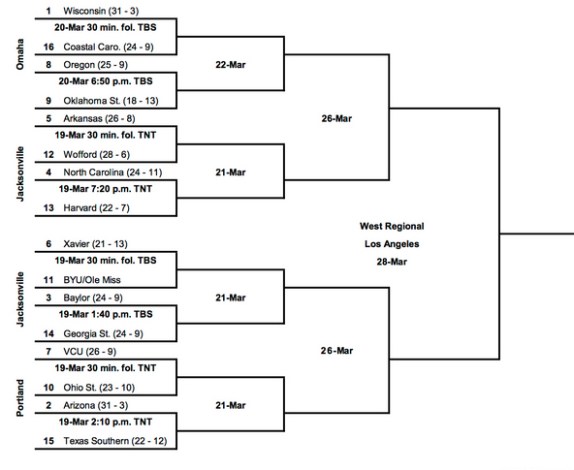 For my money, the West is the toughest region this season if we ignore the Midwest’s ‘Kentucky Factor’. With Wisconsin as the No. 1 and Arizona as the No. 2, there isn’t going to be much room for upsets on the top seed line, which is bad news for North Carolina and Baylor, two teams that certainly have Final Four potential.

This isn’t a bad thing, mind you. It just makes it that much more fun.

For my money, these are the two best teams in the country this side of Kentucky. Wisconsin is just so ruthlessly good on the offensive end of the floor that it can help make up for some of their relative struggles defensively. Arizona is the other way around. They’re a nightmare defensively, but they can go through some scoring droughts. Both have a ton of size, both are exceedingly well-coached, and both can win a national title.

I think the Tar Heels are a very dangerous team heading into the tournament. I like teams that can beat you in different ways, and North Carolina not only has the ability to overpower opponents with their front line — they’re as good as anyone in the country at getting to the offensive glass — but they have this kid named Marcus Paige, who was a first-team Preseason All-American for a reason. Paige has struggled a bit this year with injuries and with a lack of help from his perimeter, but J.P. Tokoto, Justin Jackson and Joel Berry are playing their best at the right time. If North Carolina was in any other bracket than this one …

CBT Predictions: Wisconsin beats Arizona in another thriller to get back to the Final Four.