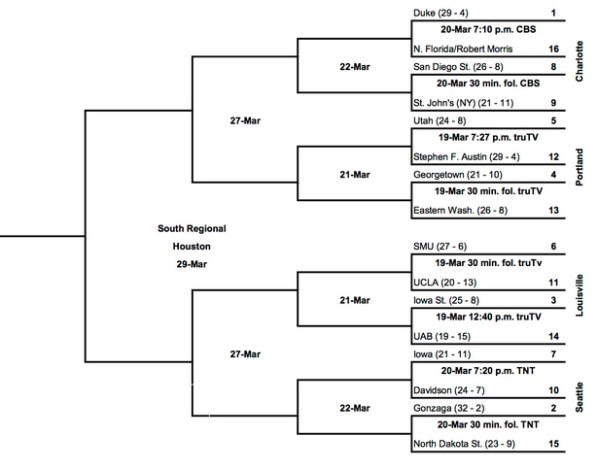 The South ended up playing out as the region that everyone will love to hate on. I’m not sure there is a program that is as universally despised by all non-fans as Duke, and the passion with which the general public hates Duke matches that with which they hate on Gonzaga. The Zags have brought it on themselves, but having so much regular season success lead to so few postseason accolades. The question that has to be asked, however, is whether or not there is anyone in this region that can actually pull off an upset of one of these two teams.

You’ll find a lot of chalk in the Elite 8 and Final Four projections this season, but that is a result of the fact that the top seven or eight teams this season are a cut above the rest of the country. That’s no different in the South. Duke will have a couple of tough matchups along the way, but they’re so dangerous when they get hot that it’s hard to see teams that can struggle to score beating them. And while Gonzaga’s got some red flags, this is a team with size, shooting, versatility and strong point guard play that got a favorable draw.

The Utes have all the makings of a team that can make a run. They play tough defense, they have size inside, they have shooters than can catch fire and they have a bonafide star running the show in Delon Wright. Larry Krystkowiak’s club has struggled down the stretch of the season, but this is a team built for making a postseason run.

CBT Predictions: Duke makes it back to the Final Four with wins over Utah and Gonzaga along the way.