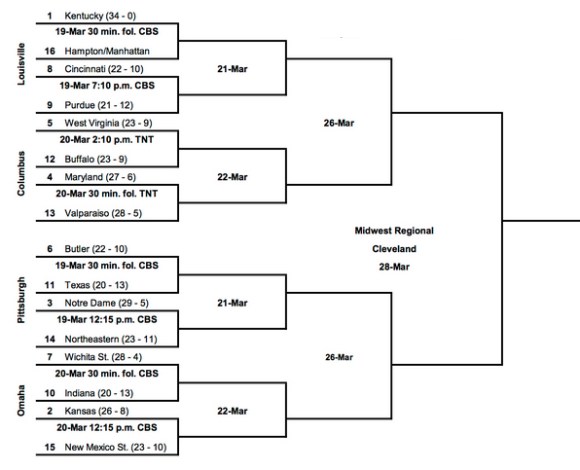 There’s not going to be a less competitive region than the Midwest this season, which seems like a lock to send Kentucky to the Final Four.

But the irony is that there may not be a more intriguing bracket than the Midwest. The No. 4 and No. 5 seeds could both end up being upset in the opening round of the tournament. Butler vs. Texas and Wichita State vs. Indiana are as juicy as opening round matchups can get. Kansas isn’t a lock to get past their No. 15 seed, and if they do, a matchup with in-state “rival” Wichita State could be waiting.

Things could get wild in this region … until people play Kentucky.

Kentucky is obvious here, but I think this is the season that Notre Dame actually puts together a run in the NCAA tournament. That’s how much I like this team. They’re lethal from beyond the arc, Jerian Grant is as good as anyone at creating open looks for those shooters and Demetrius Jackson has been playing great of late. The Irish are coming off of an impressive win in the ACC tournament.

But keep this in mind: The Longhorns have the kind of talent on their roster to be a top ten team, and they seemed to finally find their footing late in the season, regardless of whether or not they blew that lead to Iowa State. They have the size to overwhelm Butler and Notre Dame, and anything can happen if they square off with Kansas in the Sweet 16.

CBT Predictions: Kentucky. Come on. Like I’m picking against them.