Since the CBT staff has been in dozens of different NCAA Tournament pools over the years, we decided to help guide you in the right direction on the ways to make your pool the best that it can be. 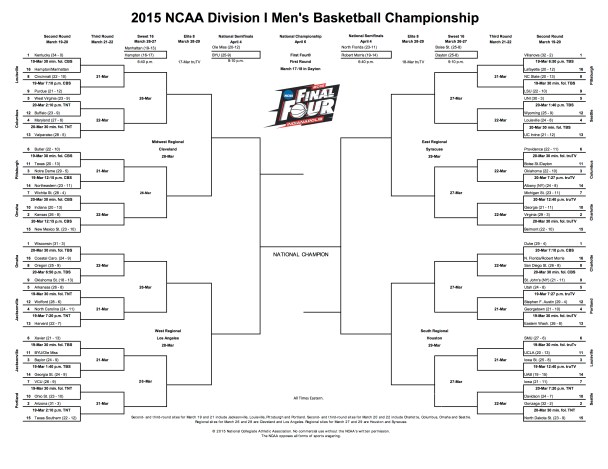 WHAT SHOULD YOU PLAY FOR? Money changing hands in NCAA Tournament pools is a big reason why people follow March Madness so closely. Tired of that doofus in your office who always brings up hot sports takes and doesn’t know what he’s talking about? Then beat him in the pool, take his money and shut up his hot takes. It’s the American way.

If your goal is to cast a wide net and get as many people as possible in your pool, then $5 is probably your ideal entry fee. It allows ultra-casual fans to feel comfortable with getting involved and people don’t feel too terrible if they lose.

If you want to weed-out the people like John from accounting who know, “Kentucky is really good,” and not much else about college basketball, then $20 might be more of your speed. Then you’ll eliminate the casual competitors from your pool and won’t feel like a moron when John from accounting inevitably beats you because you spent four days over-thinking things.

Not into losing money or gambling? That’s perfectly okay. There are plenty of ways to still keep the NCAA Tournament fresh.

I’ve heard of NCAA Tournament pools with bets for dinners, wearing embarrassing costumes, push-up contests and even one pool where a family divided up household chores based on the results. There are plenty of ways to make the NCAA Tournament fun without money exchanging hands, you just have to get creative with it.

WHAT SHOULD THE SCORING SYSTEM BE? Some pools feature straight scoring for most overall correct picks — one point per game, all games — or the more standard escalating points that double for each round.

I’ve also heard of the emerging trend of scoring rounds by only adding a single point per round, so that first-round games mean a little bit more in the overall swing of things.

That scoring breakdown goes as follows:

Scoring systems in NCAA Tournament pools depend on personal belief. If you believe that picking a national champion should mean more, then make that point total significantly higher than the earlier rounds.

Looking for a unique tiebreaker besides picking the final score of the title game? Give pool participants the option of entering their final bracket early and picking the First Four games in Dayton on Tuesday and Wednesday. Make each of those First Four games worth 1/2 of a point. With those four games, that’s two potential bonus points given to people who put their bracket in early. Then you don’t have to text them an hour before tip-off on Thursday asking for their picks.

People that enter multiple brackets are the worst people in the world (besides Iggy Azalea).

If you have a side “mascot bracket,” okay, I get it. You’re trying to cater to someone special in your life who might enjoy that and have a bit of fun. There’s nothing wrong with that.

But if you’re that person who says, “…well, in my other bracket,” nobody is going to take you seriously. Nobody. These people are hedging their bets and trying to sound smart because they picked something correctly in one of their many brackets. Congratulations, it only took you four tries of filling out a bracket to pick that 5-12 upset. Nobody cares. These people still over-glorify high school accomplishments and have used the same Facebook photo for five years because they’ve put on weight but don’t want people outside their circle to know it.

This is America’s event and you should be overconfident to a fault with your single bracket like everyone else.

HOW SHOULD YOU SEND THE INITIAL EMAIL/WELCOME LETTER? NCAA Tournament pools have reached such epic proportions in some cases that it feels like you have no idea who is in charge. We’ve all entered that friend of a friend’s pool and you quickly have no idea who anyone is or what your connection is to the pool itself.

If you’re running a pool, take a second to introduce yourself and what you — and your pool — are about before you demand total strangers to send $20 over Paypal or Chase Quickpay.

Put a contact email address or phone number, maybe even a Twitter handle. Explain when people can expect payouts, how they’ll receive payouts and what the payout breakdown will be. Tell people when they can expect scoring updates or any other vital messages. A little communication and common courtesy never hurt anybody and the people in your pool who don’t necessarily know you will have a higher comfort level in joining and staying in your pool in future years.

And if you’re on a big email chain in an NCAA Tournament pool, don’t be that person who hits “reply all” for a simple question that you can send to one person. You’re better than that.

Have some creative ideas of your own? We’d love to hear them in the comments section (and some great ideas like the Final Four party idea came from it last year).

Best of luck in your March Madness Pool endeavors.