Duke earned themselves a semi-surprising No. 1 seed in the South Region, playing their first two games of the event in Charlotte. There was some talk that the Blue Devils would not be on the top seed line after losing to Notre Dame in the semifinals of the ACC tournament and given the fact that they won no ACC titles, but Duke did enough damage on the road during the year to deserve this spot.

The 8-9 game in Duke’s region features San Diego State and St. John’s. The Johnnies will be without starting center Chris Obekpa.

Gonzaga is the No. 2 seed in the South, squaring off with North Dakota State in the first round of the tournament. Gonzaga might have their best team in school history, and if they can get past the Bison, they will face off with the winner of No. 7 Iowa and No. 10 Davidson. It will not be easy for the Zags, but they should have a great chance to get out of the first weekend for the first time in the career of Kevin Pangos.

The No. 3 seed in South will be the Cyclones of Iowa State, who will face UAB in the opening round. Iowa State is a dangerous team with their ability to creates mismatches, but it’s the other side of their pod that will create the most discussion this season. No. 6 seed SMU will be playing … UCLA? The Bruins were considered OFF the bubble in most projections, but they got into the tournament AND avoided a play-in game. And there is your most surprising decision.

The No. 4 and No. 5 seeds in the South both have the potential to get upset. No. 12 Stephen F. Austin, who beat VCU last season as a No. 12 seed, will face off with No. 5 Utah, while high-scoring Eastern Washington will get No. 4 Georgetown, who has had their fair share of trouble with double-digit seed in recent seasons. 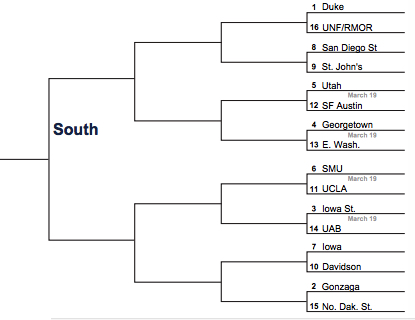