For the second time in program history Jay Wright’s Villanova Wildcats will be a one-seed in the NCAA tournament, and they’ll do so in the East Region. Villanova lost just two games this season, both in Big East play, and they won the conference’s regular season and tournament titles. Their first opponent in Pittsburgh is Lafayette, which got hot and won the Patriot League’s automatic bid.

The 8/9 game in the East is an intriguing one, as NC State takes on LSU in a matchup of two talented teams. The Wolfpack were tested in the ACC, where they beat Duke during conference play, and while LSU has posted some surprising losses they’ve also managed to rack up quality wins. Either team will be challenge for Villanova given the depth that both teams have in their respective front courts.

Also in the top half of the bracket are four-seed Louisville and five-seed Northern Iowa, with the Cardinals taking on one of the tallest teams in the country in UC Irvine and the Panthers playing a Wyoming team that would prefer to slow games to a crawl. The best individual matchup in these two games to be played in Seattle: UNI’s Seth Tuttle vs. Wyoming’s Larry Nance Jr.

Two-seed Virginia, which finished atop the ACC for the second straight year anchors the bottom half of the bracket and they’ll take on a Belmont team that can shoot the basketball. And in the 7/10 matchup Michigan State, which nearly beat Wisconsin in the Big Ten title game, takes on Georgia with these games being played in Charlotte.

Oklahoma is the three-seed in the East and they’ll take on Albany in their opener in Columbus, with six-seed Providence getting either Boise State or Dayton. The Broncos and Flyers will meet in the First Four, which will be a home game for Dayton. 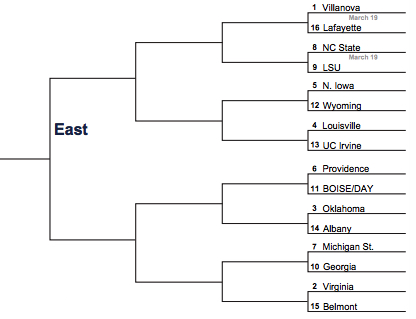