Gregory hits a two for the lead, but an unsuited player was on the court after. Potential technical. #BigSkyMBB pic.twitter.com/7GQ90Pp8xZ

Montana guard Jordan Gregory drove to the basket, converting on a go-ahead bucket with less than a second remaining in the Big Sky semifinal against Northern Arizona.

The Grizzlies would win, 61-59, and advance to the title game against Eastern Washington. But should they have been called for a technical foul after Gregory’s shot?

Look at the video again, and you notice a member of the Montana bench — the academically ineligible Jermaine Edmonds — out in the middle of half-court only to realize the game isn’t over. He sprints and dives back to the sideline only to be instantly berated by a coach. Here’s a picture of the court, courtesy of Cody Bashore: 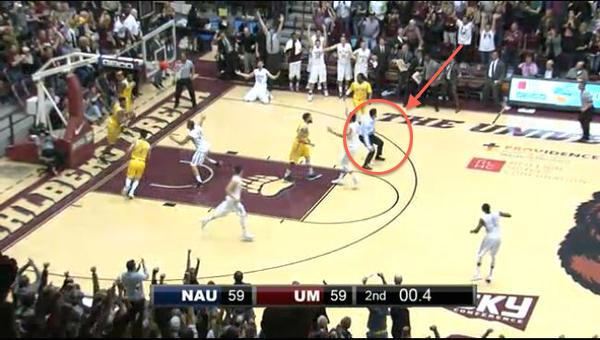 Also worth noting here: Northern Arizona head coach Jack Murphy’s response after the game. He screamed in Travis DeCuire’s face as the coaches met at half court, and it nearly started a brawl. The incident starts at the :42 second mark:

This incident could fall under the rules for Coach and Bench Decorum, specifically the last sentence in Section 1, Article C:

No technical was called on the play and Montana is 40 minutes and an upset away from a NCAA tournament appearance.