The WAC played out as many expected, with preseason favorite New Mexico State winning the league with a 13-1 conference record. Two of the Aggies’ key players, Daniel Mullings and Tshilidzi Nephawe, returned to the rotation in mid-January after missing time due to injury and New Mexico State hasn’t missed a beat. And this is their tournament to lose, as the only other WAC team with an overall winning record (Grand Canyon) isn’t playing since they’re ineligible for postseason play as a provisional Division I member. While there could be some surprises in other areas of the bracket, the biggest would be if the Aggies didn’t win the automatic bid. 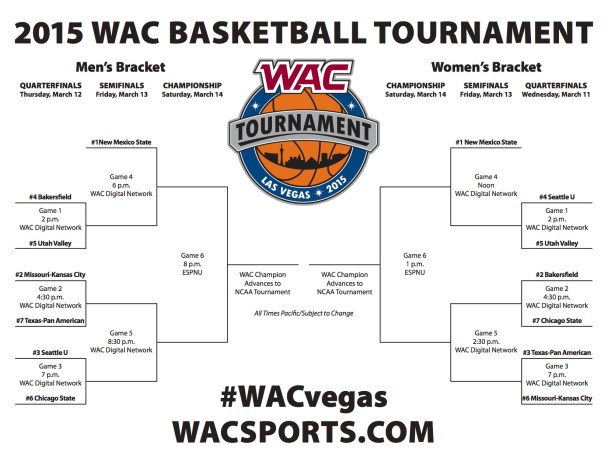 The Aggies lost just one conference game, falling 58-52 at Seattle January 17. Since then they’ve won 11 straight games, with Mullings and Nephawe back in the rotation. Nephawe’s injury meant even more time for freshman Pascal Siakam, and boy did he step up. The WAC’s top freshman, Siakam averaged 13.2 points and 7.7 rebounds per game and senior forward Remi Barry is also averaging 13.2 points per contest. Five players average between 9.5 and 13.2 points per game and a sixth, guard D.K. Eldridge, adds 8.4 ppg.

And if they lose?: Kansas City

Kansas City has the WAC’s best scorer in sophomore Martez Harrison, who averaged 17.4 points to go along with 3.8 assists per game. Kareem Richardson’s team does a good job of forcing turnovers on the other end, as they forced a league-best 16.8 turnovers per game. But if there’s a concern for the Kangaroos, it’s that they allowed conference opponents to post an offensive rebounding percentage of 40 percent. They have to be better in that area in order to make a run in Las Vegas.

In addition to averaging 17.4 points per game, Harrison also accounted for 3.8 assists and 1.9 steals per game. He’s the feature option for Kansas City, which relies on him to create for himself and his teammates. And despite the attention from opposing teams that comes with this, Harrison’s been very productive.

Menzies’ team went 13-1 in conference play, and their 13 wins were by an average of 14.2 points per game. Sure they were expected to win the league, but New Mexico State was flat-out dominant this season.